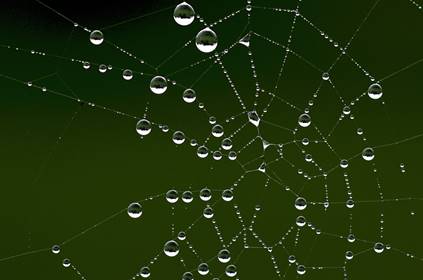 – Liquids evaporating into vapour is a daily occurrence, and yet the time it takes a liquid droplet to completely evaporate has remained a mystery

– The new theory, which accurately predicts the lifetime of droplets can now be exploited for engineering design

The lifespan of a liquid droplet which is transforming into vapour can now be predicted thanks to a theory developed at the University of Warwick. The new understanding can now be exploited in a myriad of natural and industrial settings where the lifetime of liquid drops governs a process’ behaviour and efficiency.

Water evaporating into vapour forms part of our daily existence, creating plumes emanating from a boiling kettle and bulging clouds as part of the earth’s water cycle.  Evaporating liquid drops are also commonly observed, e.g. as the morning dew disappears off a spider’s web, and are critical for technologies such as fuel-injection combustion engines and cutting-edge evaporative cooling devices for next generation electronics.

Researchers from the Mathematics Institute and School of Engineering at the University of Warwick have had the paper ‘Lifetime of a Nanodroplet: Kinetic Effects & Regime Transitions’; published in the journal Physical Review Letters, in which they explore the lifespan of a liquid droplet.

Current theories state that the droplet’s diameter-squared decreases in proportion to time (classical law); however, this period only accounts for a small portion of the drop’s evolution. As the diameter approaches the unobservable micro- and nano-scale, molecular dynamics have to be used as virtual experiments and these show a crossover to a new behaviour, with the diameter now reducing in proportion to time (nano-scale law).

Research at Warwick has shown that this behaviour occurs due to complex physics in the vapour flow, which can result in jumps in temperature across just a few molecules as large as 40 degrees!  This behaviour is counter-intuitive to our daily experiences (on the macroscale), where we are used to temperatures changing relatively gradually, but must be accounted for to accurately predict the final stages of an evaporating drop’s life.

Prof Duncan Lockerby from the School of Engineering at the University of Warwick comments:

Dr James Sprittles from the Mathematics Institute at the University of Warwick comments:

“It is fascinating that intuition based on everyday observations are a hindrance when attempting to understand nanoscale flows, so that, as in this research, one has to lean on theory to enlighten us.”

About the Mathematics Institute:

The University of Warwick’s Mathematics Institute was ranked 3rd in the UK by the 2014 REF (Research Excellence Framework) – with more than 90% of research activity assessed as either internationally excellent or world leading.

The research environment at Warwick is rated by REF 2014 as the very best in the UK for mathematical sciences (achieving the maximum possible score of 100% at 4*).

About the School of Engineering: