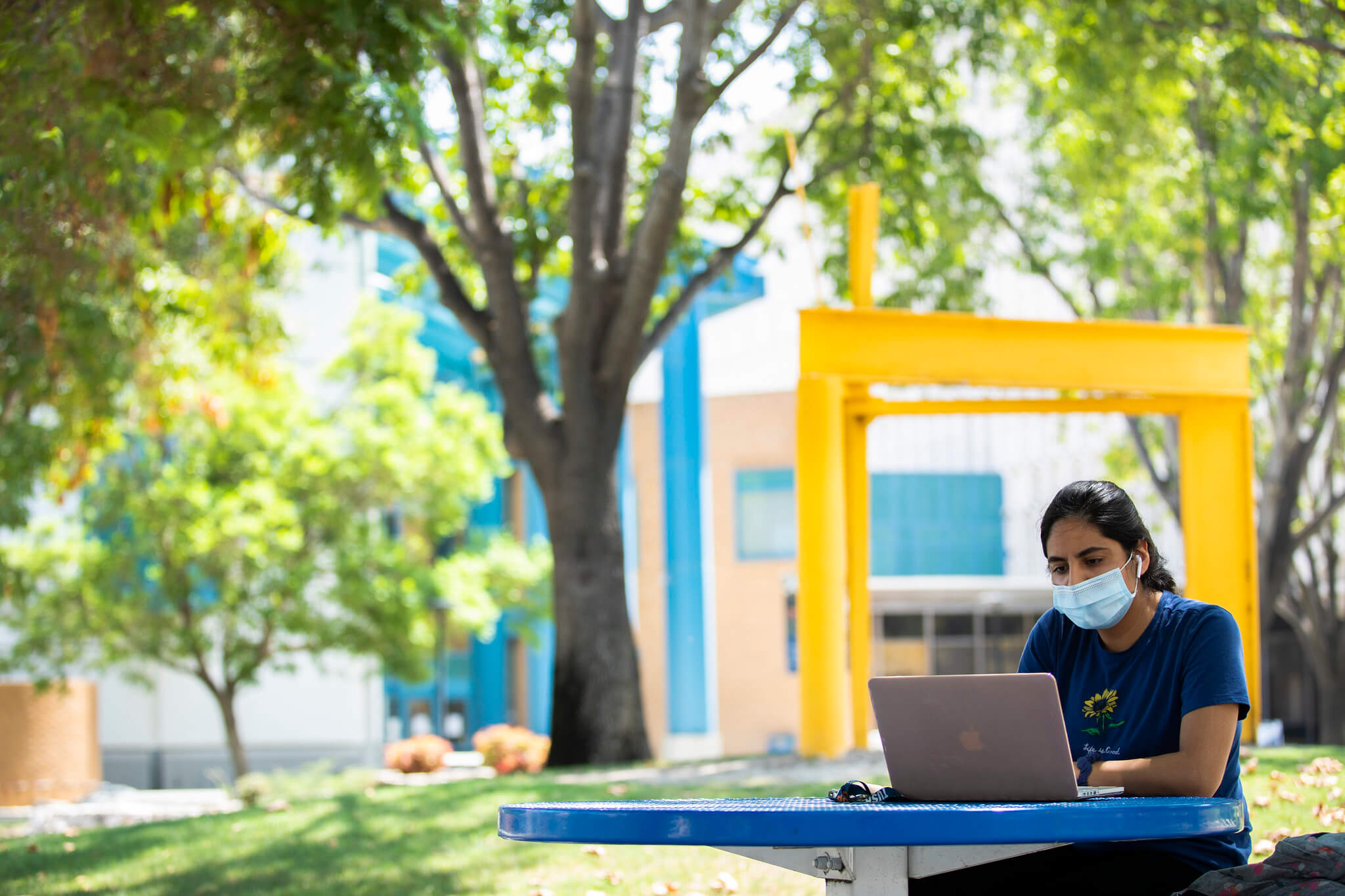 ​​In times of political and societal turmoil, misinformation abounds. From deepfakes to viral conspiracy theories, how do we trust the media we consume is truthful? Education may be the best defense in creating critical information consumers in today’s “fake news” world.

“Quite strongly, my belief is that education is really the only solution,” says Nolan Higdon, Ed.D., media studies instructor at Cal State East Bay and author of “The Anatomy of Fake News: A Critical News Literacy Education.“

Dr. Higdon, who teaches The Anatomy of Fake News course at CSUEB, says studies show that those who have some sort of critical thinking education tend to fair better in being able to question misinformation, even when they are hit with repetitious false messages. “There are a lot of studies that back up the idea that education is our best path forward.”

Higdon reminds his students that the purpose of news is to serve our democracy—to become a more informed democratic republic. As part of his fake news class coursework, he refers to work by Allison Butler, Ph.D.,  co-president of the Action Coalition for Media Education and a lecturer at University of Massachusetts. Dr. Butler writes that we need to “recast ourselves as media citizens, not media consumers.”

To reinforce that concept, Higdon helps his students analyze media and determine if it fits the code of ethics of journalism—is it serving democracy? “I want to teach folks how to think, not what to think. I like to say, here’s what you should look at, here’s what you should consider, here’s how you should analyze. Then you can make the decision on your own.”

I TEACH FOLKS HOW TO THINK, NOT WHAT TO THINK: HERE’S WHAT TO CONSIDER, HERE’S HOW YOU ANALYZE. THEN YOU CAN MAKE THE DECISION ON YOUR OWN.” —DR. NOLAN HIGDON, CAL STATE EAST BAY​, “ANATOMY OF FAKE NEWS” AUTHOR

​Higdon says he upholds the free press and the principle that “if the truth is out there, you’ll be able to find it.” However, you still need to have a public that is able to sift through the information to find the truth, he explains.

“We’ve gotten into this comfortable place where the ‘other side’ is fake news,” Higdon says. “So as long as I’m not reading the other side, I feel confident that I’m right—your MSNBC liberals versus your Fox News Republicans, for example. We haven’t really questioned that [confirmation bias] paradigm and we need a much deeper analysis.”

And big tech social media algorithms have only complicated the fake news problem, he says.

“Algorithms tend to give people what they want to hear or read, not what they need to hear, and they do it repetitiously. And those two things we found, are what lead to people believing false content, even when you give them true information. And this is how you radicalize people,” Higdon says.

And radicalized media consumers may be more likely to act on false information or conspiracy theories. Researchers at CSU Dominguez Hills also found that people who have disordered thinking are twice as likely to generate fake information online.

“We kind of laugh at the radical who does the crazy thing, like mail bombs or shoot guns to stop a child molestation ring,” Higdon says. But it’s worth considering that in these people’s minds, they’re heroes, because they’re in this alternate reality where they’re bombarded with messages about these horrible things that are happening and they’re trying to take justice in their own hands. And so we should pay attention to why that happens to them.”

Conspiracy theories are nothing new, however. CSU San Marcos assistant professor of history, Kimber M. Quinney, Ph.D., says that there has been a long history of conspiracy theories in American history, which are often based on political paranoia. “An example of a conspiracy theory reflecting the paranoid style in American politics is QAnon. It is factless, stoked by foreign influence and it’s a potent and pervasive threat to our democracy,” Dr. Quinney says.

Quinney emphasizes that we all need to do our part to shut down the spread of disinformation—info that is deliberately misleading. As an historian, she boasts the importance of historical thinking—a certain type of critical thinking—that includes concrete steps for analyzing information that can be a part of today’s information literacy toolbox. “History plays a powerful role as a guard against conspiracy theories and as a guardian of democracy.”

Critical thinking and media literacy may be more important now than ever. “In the 21st Century, media literacy is crucial to navigating through our society,” says Jim Boren, executive director of the Institute for Media and Public Trust at Fresno State. Boren and university colleagues started the  institute in 2018 to improve news literacy and bridge the trust gap between news consumers and media outlets.

How do you build that trust? Transparency, says Boren, former executive editor at the Fresno Bee. “News consumers must know how journalists gather news, and the role that editors play in the final product,” he says. “Pull back the curtain and allow the public to see the news-gathering process. The old, secretive ways of producing journalism is part of the reason for so much distrust today.”

In fact, media must be at the forefront in exposing misinformation and disinformation that has found a home on social media platforms, Boren says. “It is crucial that trusted organizations work together to ensure that the public gets verifiable information.”

MEDIA LITERACY EDUCATION SHOULD BE PART OF ALL PUBLIC EDUCATION CURRICULUM.”—JIM BOREN, FRESNO STATE INSTITUTE FOR MEDIA AND PUBLIC TRUST

Susan Maret, Ph.D., lecturer at the San José State School of Information and former academic librarian adapted a helpful checklist for establishing information integrity. The resource includes key questions to ask about the authority and messaging of the content, as well as the research and fact-checking methodology. (Chico State librarians also developed the popular CRAAP Test—an acronym for examining the currency, relevance, authority, accuracy and purpose of information or media content.)

While more media literacy education is clearly needed, there are simple steps that everyone can take to verify information and avoid contributing to the fake news problem. (See “Ready for Battle” below.)