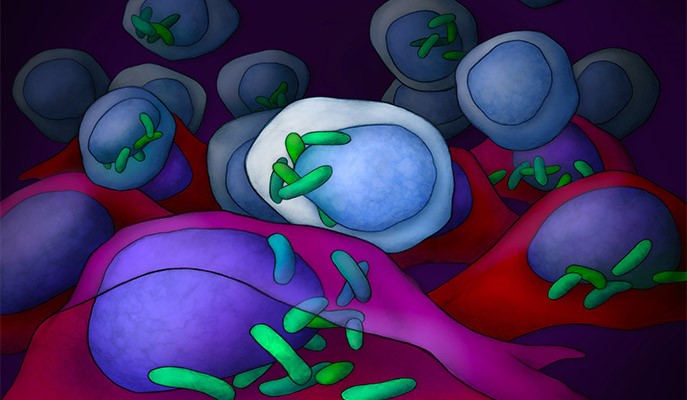 Cancer cells are comfy havens for bacteria. That conclusion arises from a rigorous study of over 1,000 tumor samples of different human cancers. The study, headed by researchers at the Weizmann Institute of Science, found bacteria living inside the cells of all the cancer types – from brain to bone to breast cancer – and even identified unique populations of bacteria residing in each type of cancer. The research suggests that understanding the relationship between a cancer cell and its “mini-microbiome” may help predict the potential effectiveness of certain treatments or may point, in the future, to ways of manipulating those bacteria to enhance the actions of anticancer treatments. The findings of this study were published in Science and featured on the cover.

Several years ago, Dr. Ravid Straussman of Weizmann’s Department of Molecular Cell Biology discovered bacteria lurking within human pancreatic tumor cells. The bacteria were shown to protect cancer cells from chemotherapy drugs by “digesting” and inactivating these drugs. When other studies also found bacteria in tumor cells, Dr. Straussman and his team wondered whether such hosting might be the rule, rather than the exception. To find out, Drs. Deborah Nejman and Ilana Livyatan in Straussman’s group and Dr. Garold Fuks of Weizmann’s Department of Physics of Complex Systems worked with a global team of oncologists and researchers. The work was also led by Dr. Noam Shental of the Mathematics and Computer Science Department of the Open University of Israel.

The team would ultimately produce a detailed study describing, in high resolution, the bacteria living in these cancers – brain, bone, breast, lung, ovary, pancreas, colorectal, and skin (melanoma). They discovered that every single cancer type harbored bacteria, and that different cancer types harbor different bacteria species. It was the breast cancers, however, that had the largest amount and diversity of bacteria. The scientists demonstrated that many more bacteria can be found in breast tumors than in the normal breast tissue surrounding the tumors, and that some bacteria were preferentially found in the tumor tissue rather than in the normal tissue surrounding it.

To arrive at these results, the team had to overcome several challenges. For one, the mass of bacteria in a tumor sample is relatively small, and the researchers had to find ways to focus on these tiny cells-within-cells. They also had to eliminate any possible outside contamination. To this end, they used hundreds of negative controls and created a series of computational filters to remove the traces of any bacteria that could have come from outside the tumor samples.

The team was able to grow bacteria directly from human breast tumors, and the results proved that the bacteria found in these tumors are alive. Electron microscopy visualization of the bacteria demonstrated that they prefer to nestle in a specific location inside the cancer cells: close to the cell nucleus.

The team also reported that bacteria can be found not only in cancer cells, but in immune cells that reside inside tumors. “Some of these bacteria could be enhancing the anticancer immune response, while others could be suppressing it – a finding that may be especially relevant to understanding the effectiveness of certain immunotherapies,” says Dr. Straussman. Indeed, when the team compared the bacteria from groups of melanoma samples, they found that different bacteria were enriched in those melanoma tumors that responded to immunotherapy as compared to those that had a poor response.

Dr. Straussman thinks that the study can also begin to explain why some bacteria like cancer cells and why each cancer has its own typical microbiome: the differences apparently come down to the choice of amenities offered in each kind of tumor cell environment. That is, the bacteria may live off certain metabolites that are overproduced by or stored within specific tumor types. For example, when the team compared the bacteria found in lung tumors from smokers with those from patients who had never smoked, they found variances. These differences stood out more clearly when the researchers compared the genes of the two groups of bacteria: those from the smokers’ lung cancer cells had many more genes for metabolizing nicotine, toluene, phenol, and other chemicals in cigarettes.

In addition to showing that some of the most common cancers shelter unique populations of bacteria within their cells, the researchers believe that the methods they developed to identify signature microbiomes for each cancer type can now be used to answer crucial questions about the roles these bacteria play: Are the bacteria freeloaders on the cancer cell’s surplus metabolites, or do they provide a service to the cell? At what stage do they take up residence? How do they promote or hinder the cancer’s growth? What effects do they have on the cell’s response to anticancer treatments?

“Tumors are complex ecosystems that are known to contain, in addition to cancer cells, immune cells, stromal cells, blood vessels, nerves, and many more components, all part of what we refer to as the tumor microenvironment. Our studies, as well as studies by other labs, clearly demonstrate that bacteria are also an integral part of the tumor microenvironment. We hope that by finding out how exactly they fit into the general tumor ecology, we can figure out novel ways of treating cancer,” Dr. Straussman says.

The Weizmann Institute of Science in Rehovot, Israel, is one of the world’s top-ranking multidisciplinary research institutions. The Institute’s 3,800-strong scientific community engages in research addressing crucial problems in medicine and health, energy, technology, agriculture, and the environment. Outstanding young scientists from around the world pursue advanced degrees at the Weizmann Institute’s Feinberg Graduate School. The discoveries and theories of Weizmann Institute scientists have had a major impact on the wider scientific community, as well as on the quality of life of millions of people worldwide.