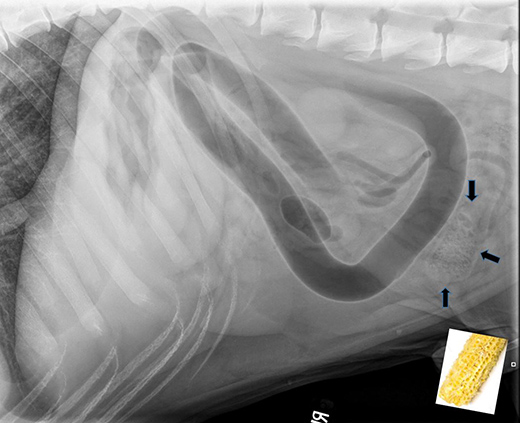 While eating kernels of corn generally does not pose a health risk for most dogs, the corncob can be a problem if the dog ingests it, said Susan Nelson, veterinarian and clinical professor at the Veterinary Health Center, a part of the K-State College of Veterinary Medicine. Nelson said the problem is one veterinarians most often see in the summer and fall when corn on the cob is most popular.

“Dogs are attracted to corncobs due to the good-tasting corn kernels and the cob itself,” Nelson said. “The cob is something they love to chew on, and while some dogs may chew it up into tiny pieces, others attempt to swallow it whole or swallow large pieces of the cob.”

Swallowing the cob or pieces of the cob often causes a life-threatening obstruction of a dog’s gastrointestinal tract, Nelson said, adding that the smaller the dog, the smaller the piece of cob that can cause this to happen. Corncobs also are not digestible, so if there is an obstruction of the gastrointestinal tract, abdominal surgery is usually needed to remove it.

“If smaller pieces of cob are in the stomach, they can sometimes be endoscopically removed,” Nelson said. “But if dogs do not have the cob or pieces of cob causing the obstruction removed, it is usually fatal. Dogs that are brought to a veterinarian after they have been showing symptoms will also sometimes not survive, even with surgery.”

Signs that your dog may have an obstruction caused by a piece of corncob or is experiencing other problems due to ingesting corn or corn on the cob include vomiting and/or dry heaves; diarrhea; straining to have a bowel movement; decreased or no appetite; a painful abdomen — or belly; lethargy or reluctance to play; or seeking seclusion. If you see any of these signs in your dog, Nelson said have it seen by a veterinarian immediately.

Nelson recommends keeping all corncobs safely away from dogs.

“Make sure the container in which you keep corncobs is in an area where dogs do not have access to or the cobs are in a secured container or locked cabinet,” Nelson said. “Remember, dogs can be very good at opening doors, lids, etc.”

If your dog does sneak a cob, take it away immediately, Nelson said. If the dog will not give up the cob or will try to bite you if you attempt to take it away, offer the dog an even more desirable treat or toy and then get the cob when the dog drops it to take the other offering.

While corncobs can be dangerous for dogs, corn itself is used as a protein source in many dog foods. Nelson said that contrary to popular belief, dogs can utilize nutrient sources that come from corn as their digestive tracts have evolved over the years to allow it because of their close association with humans and what we eat.

However, there are certain situations where corn can be problematic.

“If dogs have a corn allergy, which is not very common, then corn should be avoided,” she said “Corn that has added butter on it can put some dogs at risk for developing pancreatitis, which can be fatal in some circumstances. Corn with added salt can also be a problem for dogs with medical conditions such as congestive heart failure.”

“If they learn to like corn, they will be more persistent at trying to get to it,” she said. “But if you do decide to feed them corn, make sure to cut the kernels off the cob first, and only feed a small amount.”