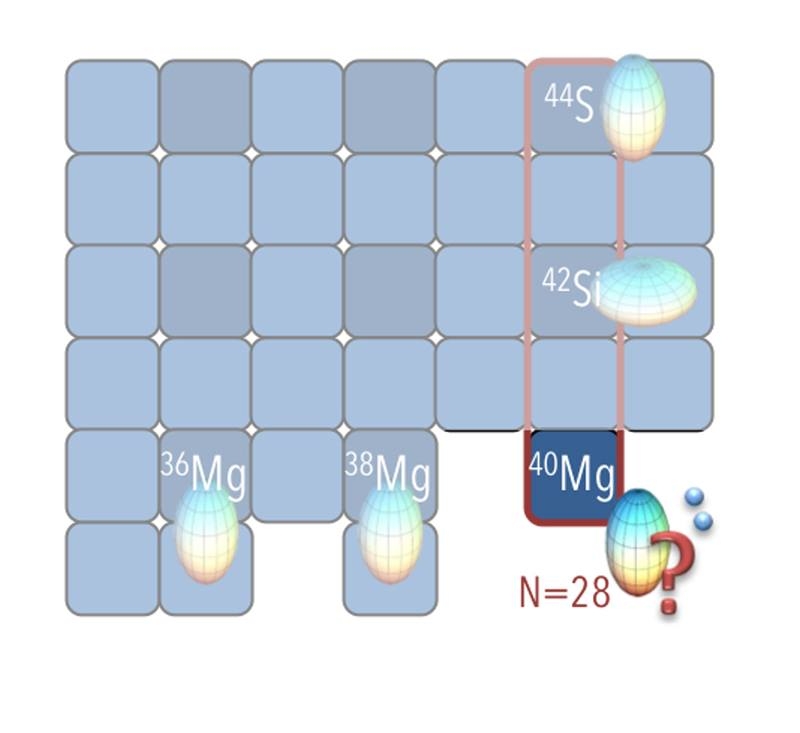 The excited states of an atom’s nucleus are fingerprints of its structure. The energies and patterns of excited states tell us about the shape of the nucleus and how individual protons and neutrons interact with each other. Models for nuclei “near stability,” or those we find around us in nature, provide a very good description of these excited states. However, a predictive model that works with weakly bound nuclei, at the limits of nuclear stability, remains elusive. Measurements of the most exotic systems that scientists can create in the laboratory are key to improving models and getting to a predictive description. Now, the first glimpse into the structure of the very neutron-rich magnesium-40 (12 protons, 28 neutrons) provides a new and critical data point for weakly bound nuclei very near this stability limit.

Accurate theoretical descriptions for the structure of the atomic nucleus at the very limits of stability are important. Why? Such descriptions let us calculate the properties of nuclei that likely exist in explosive stellar environments, which we can’t study experimentally in the laboratory. To move toward such a description, we need to test the predictions of our models for the most exotic nuclei that we can produce. A recent measurement exploring the structure of magnesium-40 has shown a surprising change in the structure relative to expectations. This unanticipated change could be pointing to physics missing from our theories, such as the effects of weak binding between particles.

Magnesium isotopes offer an opportunity for nuclear physicists to explore the evolution of structure from the stable nuclei all the way to the neutron drip-line, beyond which an additional neutron will immediately “drip” out of the atom’s nucleus. While the heaviest magnesium isotopes are likely not key in stellar environments, they do provide a stringent test for theoretical models. Further, these isotopes may provide insight into how very weakly bound systems modify nuclear structures. In this study, researchers produced the magnesium-40 nuclei in excited states. They did so by suddenly removing a proton from a fast-moving (60 percent the speed of light) beam of unstable (radioactive) aluminum-41 nuclei that hit a thick plastic target. The team observed gamma rays de-exciting the excited states in a high-efficiency scintillator array. The pattern of gamma-ray energies shows a dramatic change as compared to those observed for excited states in magnesium-36,38. The deviation from both the available theoretical predictions and the systematic behavior of the lighter magnesium isotopes may be an indication for the manifestation of weak-binding effects.

This work was supported by the Department of Energy, Office of Science, Office of Nuclear Physics; Royal Society; and United Kingdom Science and Technology Facilities Council. The authors also thank the accelerator operations staff at Radioactive Isotope Beam Factory/RIKEN Nishina Center for Accelerator-Based Science their work in primary beam delivery and the BigRIPS team for preparing the secondary beam.