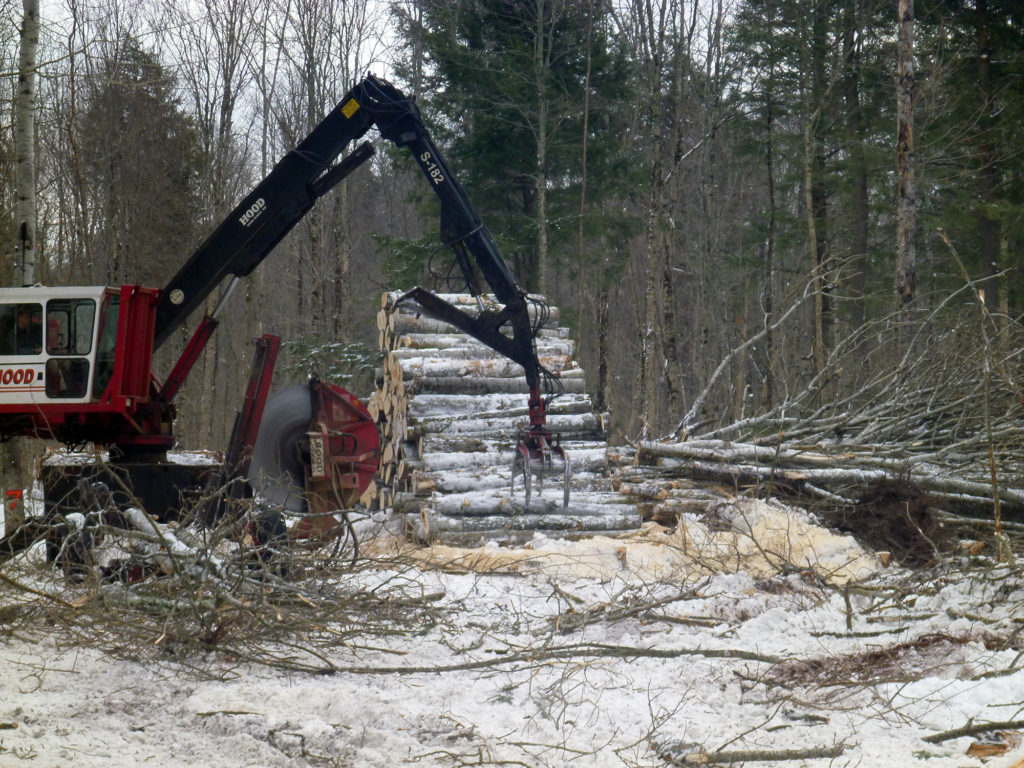 In the U.S., coal plants are closing, but carbon dioxide concentration in the atmosphere continues to rise; pivoting toward renewable energy sources like wind, solar and biofuels is a necessary step toward halting the worst effects of climate change. Forest biomass is expected to be one of the key energy sources, but many people have wondered how to feed biofuel plants the materials they need without destroying forest resources.

Whole-tree aspen logging promotes renewable biomass energy from tops and branches, parts of the tree that are often left in the forest during logging in favor of the tree’s trunk — using the residual that remains after a sustainable harvest for logs. It has long been assumed that removing the leaves and branches of trees, rather than allowing them to decompose in the woods, will deplete the soil and lead to a weaker forest ecosystem. New research from Michigan Technological University’s School of Forest Resources and Environmental Science challenges that hypothesis.

“Many far-reaching energy development decisions have been made based on assumptions,” said Robert E. Froese, associate professor and director of the Ford Center and Forest.

Authors Michael I. Premer, who earned his doctorate in quantitative silviculture at Michigan Tech and now works as a research silviculturist for Rayonier, Froese and Eric D. Vance, recently retired from the National Council for Air and Stream Improvement, Inc., have recently published, “Whole-tree harvest and residue recovery in commercial aspen: Implications to forest growth and soil productivity across a rotation,” in the journal Forest Ecology and Management, the third of a series of related articles about logging residue in managed aspen forests in Michigan’s Upper Peninsula.

The three studies synergistically address the same question: What are the effects of removing logging residues — the tops, branches and defective parts of tree trunks (boles) — in Great Lakes aspen forests on forest productivity and environmental sustainability?

In the first study, the researchers examined the effect of residue removal on understory plant communities rather than allowing it to decompose and theoretically provide nutrients to the herbaceous and shrubby vegetation underneath the tree canopy.

In the second study, Premer, Froese and Vance delved deeper into an effect they noticed while the study was underway: “Cut to length” logging systems used intentionally to reduce soil compaction might not be effective in this regard, creating long-lasting patterns of reduced growth within regenerating stands.

The third paper examines the persistence of residues and differences in carbon sequestration and macronutrients between sites where residues were removed and where they were retained. Collectively, the three papers address site impacts in Great Lakes aspen forests and demonstrate that residue removal has few effects on forest ecology in managed stands.

“It seems obvious: logging, especially when tops and branches are removed for bioenergy production, must remove nutrients and wood that should remain to nourish the regenerating forest. So Midwestern states adopted guidelines for forest biomass harvest to protect forest lands,” Froese said. “We studied the difference in soil nutrients, carbon and the rate of growth of regenerating aspen forests in the upper Midwest and we found there is no difference in aspen stand productivity when whole trees are removed. It turns out branches just don’t appear to play much of a role in the ecology of aspen forest productivity after all.”

Operating under a mistaken assumption, Midwestern states adopted guidelines to protect soils and ecosystems without really understanding the need for guidelines. This action has added complexity and cost, which disincentivize the adoption of bioenergy.

“The states’ actions convey the notion that all biomass removal is ‘damage’ and therefore we must limit the ‘damage’ to some level that we can tolerate,” Froese said. “It may be that recovering biomass doesn’t damage the forest at all. If it reduces fossil fuel use, it may contribute to reducing damage to the global climate.”

Froese adds that despite its moniker, whole-tree logging doesn’t actually remove every last leaf and twig from the forest; Froese said in their study, 64% of residues remained despite trying to pick up as much of the logged study trees as possible.

The researchers sampled reforested aspen stands located in Baraga, Delta, Dickinson and Menominee Counties that are owned and actively managed by Weyerhaeuser Company (formerly Plum Creek Timber Company), and for which a 40-year commercial logging record exists, providing the scientists with a data set to verify against field measurements.

“Whether removed or not, aspen branches disappear fast by rotting away,” Froese said. “For aspen forests, it appears that even the most intensive harvest is perfectly sustainable.”

“We demonized the use of a renewable resource and we’ve shifted our energy generation from coal toward a different fossil fuel. Better, but still a fossil fuel,” Froese said. “As the climate changes, we need to turn to renewables and we’re missing an opportunity to pick up a renewable that’s plentiful, natural and as we’ve demonstrated can be sustainably managed.”

Froese argues that the Upper Peninsula is populated by a sustainable supply of biomass — aspens, jack pines and other conifers — and that the upper Midwest is poised to choose renewable energy sources rather than continuing to install natural gas plants with 30-year use lifespans that make uncoupling from fossil fuels any time soon a tricky economic proposition.

“For better or for worse we have term limits on fossil fuels,” Froese said. “We know CO2 levels crested an important milestone this year. And we know we need every possible renewable energy source to contribute if we want to get off of fossil fuels.

“This has an essential practical application: If we can’t demonstrate that feedstock for biomaterials can be produced from forests, then we can’t engineer advanced materials and supply chains,” Froese said. “It’s about resiliency — forests, in particular, and rural landscapes, in general. It’s about sustainability of managed landscapes.”