“The clinical data on Leqembi is solid and shows moderately less decline for those participants who received the drug compared to those who did not in the Phase III study,” said Sarah Kremen, MD, who leads the Alzheimer’s Disease Clinical Trial Program at Cedars-Sinai. “But before making this treatment available to patients, we have to take steps to ensure that we’re giving the drug as safely as possible to patients who will face the least risk and receive the greatest benefit—a critical process that takes time.”

Kremen, director of the Neurobehavior Program in the Jona Goldrich Center for Alzheimer’s and Memory Disorders, sat down with the Cedars-Sinai Newsroom to explain the risks and benefits of Leqembi and what interested patients can expect that process to include.

What did clinical trials show about Leqembi’s benefits?

The data showed that the treatment can pull amyloid—a protein that forms plaques and disrupts brain function—out of the brain in a significant way. Patients receiving Leqembi during clinical trials also showed slowing in decline on tests of memory and functional ability. Leqembi also seems to decrease accumulation of tau protein, which forms tangles inside neurons of Alzheimer’s patients, particularly in the memory centers of the brain. It’s important to recognize that while these results are exciting, this medication does not reverse cognitive decline, it only slows it down.

How is Leqembi different from the other medications that are currently approved for Alzheimer’s disease?

Medications that we have been giving to patients for dementia due to Alzheimer’s disease are different from Leqembi because they are not disease modifying. This means that they may help memory for some amount of time, but they do not have an effect on the underlying disease process, such as the buildup of amyloid and tau proteins in the brain.

Who can be treated with Leqembi?

This treatment is designed for people who have either mild cognitive impairment or mild dementia due to Alzheimer’s disease. This is not for people with moderate or severe dementia, where their memory and other cognitive functions are so impacted that they need to rely on other people for help with daily living. It is also not for people at risk for Alzheimer’s disease but who have normal memory and thinking. The medication isn’t recommended for anyone taking blood thinners, or who has significant brain bleeds, brain swelling, aneurysms, vascular malformation, brain tumors, or an uncontrolled bleeding disorder.

What kind of real-world benefits might the drug have for patients?

It’s a good question. We see benefits in the data, but we don’t yet know how people will be impacted day to day. We’re hopeful that it’s going to prolong our patients’ ability to function, but that might be a difference of as little as three months. Still, three more months of better thinking and participating in activities of daily life may turn out to be very valuable to patients and their families as they navigate this neurodegenerative condition.

What are the risks associated with treatment?

Risks include brain bleeding and brain swelling, which is also true of other, similar Alzheimer’s disease treatments that haven’t made it this far in clinical research tests. The side effect we’re most concerned about is large brain bleeds, which are fairly rare but can happen. So people need to go into this with eyes open, because we’re not going to be able to completely mitigate this risk.

The medication is given by IV infusion over one hour, every two weeks—so the time commitment is something to consider. And patients will need to have an MRI before the fifth, seventh and 14th infusions, according to FDA guidelines, so that we can monitor for brain swelling and brain bleeds. We will also have to monitor for infusion reactions, such as low blood pressure or difficulty breathing, which could happen during any type of IV infusion.

What types of pre-treatment testing will patients need?

Patients will need a diagnostic evaluation to confirm that their dementia or cognitive impairment is due to Alzheimer’s disease and not something else. This evaluation can be done by a primary care doctor, geriatrician, neurologist or psychiatrist. They will also need testing to confirm the presence of amyloid, which is what the medication is designed to treat. This can be done via specialized brain imaging—which is not widely available or covered by insurance—or through spinal fluid tests. Patients will also need genetic testing, because those with one or two copies of a gene called APOE4 are at increased risk of brain bleeds and swelling and will need to take this into account when deciding whether to be treated.

What other factors will patients need to consider?

Institutions across the nation are facing this question. It could be as long as a year, as there are many steps to go through before we can make this drug available safely and to the right patients. These steps include reviews by our pharmaceutical team, creating new protocols for infusions and treatment monitoring, and training medical providers about this medication. We are working to put our systems in place as soon as possible.

Cold weather and your skin 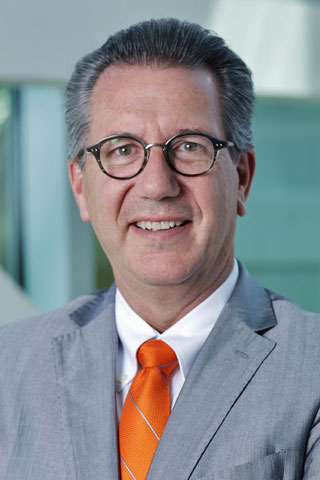 What does ChatGPT mean for higher education?