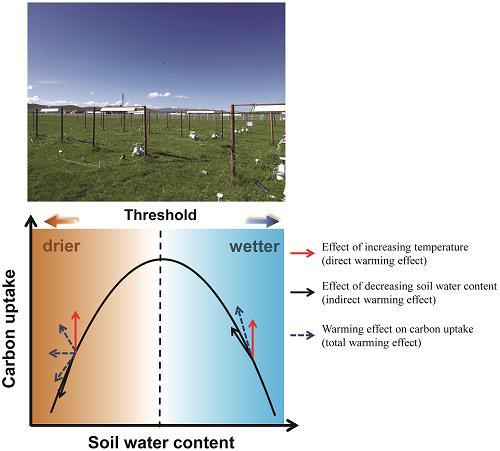 Scientists previously did not understand what caused the direction of carbon-climate feedback, making it difficult to predict future climate warming.

Recently, however, a research group led by Dr. NIU Shuli from the Institute of Geographic Sciences and Natural Resources Research (IGSNRR) of the Chinese Academy of Sciences found that water availability in soil determines the direction of carbon-climate feedback. The group’s findings were published in Science Advances on August 22, 2019.

The research team drew the conclusion primarily based on a field manipulation experiment in an alpine meadow on the Qinghai-Tibetan Plateau. They found that land carbon uptake increased when soil water content (SWC) was below its optimum but decreased above the optimum.

However, below the optimum, warming-induced reduction in SWC dampened the direct warming effects on carbon uptake under moderately dry conditions and caused positive feedback under severe dry conditions.

“In addition, to test whether this water scaling pattern is generalizable across the ecosystem, we combined the site-level mechanism with a global synthesis. The results also show that warming stimulates net carbon uptake (negative feedback) under wet conditions but depresses it (positive feedback) under very dry conditions,” said Prof. NIU.

The water scaling pattern revealed in this study provides compelling evidence that water regulates ecosystem feedback to climate warming at both temporal and spatial scales. It offers generalizable mechanisms that not only help explain varying magnitudes and directions of observed carbon-climate feedback but also improve model prediction of ecosystem carbon dynamics in response to climate warming.

The work was supported by the Ministry of Science and Technology of China, the Second Tibetan Plateau Scientific Expedition and Research (STEP) program, and the National Natural Science Foundation of China.