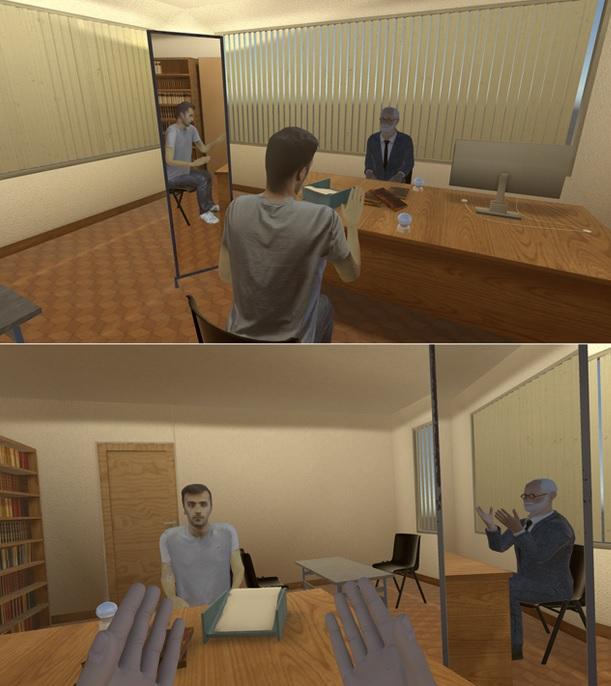 People are often much better at giving useful advice to a friend in trouble than they are in dealing with their own problems. Although we typically have continuous internal dialogue, we are trapped inside our own way of thinking with our own history and point of view, and find it difficult to take an external perspective regarding our own problems. However, with friends, especially someone we know well, it is much easier to understand the bigger picture, and help them find a way through their problems.

A research team of the University of Barcelona (UB), IDIBAPS and Virtual BodyWorks, a spin-off of both institutions and ICREA, has used immersive virtual reality to observe the effects of talking to themselves as if they were another person, using virtual reality. Study results, published in the Nature Group’s journal Scientific Reports, show that conversation with oneself embodied as Dr Sigmund Freud works better to improve people’s mood, compared to just talking about your problems in a virtual conversation with pre-scripted comments. Researchers claimed that the method could be used by clinicians to help people dealing with minor personal problems.

The study was led by Mel Slater and Solène Neyret, researchers at the Experimental Virtual Environments Lab for Neuroscience and Technology (Event Lab), a research group of the Faculty of Psychology of the UB. Clinical psychologist Guillem Feixas, of the UB Department of Clinical Psychology and Psychobiology and the Institute of Neurosciences of the University of Barcelona (UBNeuro) also guided the study.

Changing perception and attitude thanks to Virtual Reality

Previous studies developed by this research team have shown that when we adopt a different body using virtual reality, we change our behaviour, attitude and perception of things. “We showed earlier that it is possible for people to talk to themselves as if they were another person, body swapping to two different avatars, and that participants’ mood and happiness improved. However, we didn’t know whether this was due to simply the participant talking about their problem or whether the virtual body swapping really made a difference,” said Mel Slater, also a member of the UBNeuro.

In order to test the body swapping idea, researchers compared one group who talked to themselves first embodied as the participant and then body swapping to a virtual Sigmund Freud; and another (control) group who spoke to the virtual Freud, but in that case Freud responded with pre-scripted questions and comments (there was no body swapping).

For this technique to work out,researchers scanned the person to obtain an ‘avatar’ which is a 3D-likeness of the person. In virtual reality, when they look at themselves, at their body parts, or in a mirror, they will see a representation of themselves. When they move their real body, their virtual body will move in the same way and at the same time. Seated across the table is another virtual human, in the case of this experiment, a representation of Dr Sigmund Freud.

The participant can explain their personal problem to Dr Freud, and then switch to being embodied as Freud. Now, embodied as Freud, when they look down towards themselves, or in a mirror, they will see Freud’s body rather than their own, and also this body will move in synchrony with their own movements. “They will see and hear their own likeness explaining the problem, and they see their virtual self as if this were another person. Now they themselves have become the ‘friend’ who is listening and trying to help,” said Mel Slater.

While embodied as Freud, and after perceiving a strong likeness of themselves describing a problem, they can respond, as Freud, back to themselves and ask a question or help the person in front (themselves) to find a solution. After this, they are embodied once again in their own body and they can see and hear Freud’s answer. Although it was really themselves who had spoken through Freud, they will hear their voice as disguised. They can keep switching back and forth between the two bodies, so having a conversation: in reality it is with themselves, but it appears as if it is between two different people.

Participants were guided by clinical psychologist Tania Johnston about how to formulate their problem, so researchers do not know whether this method could be used without this prior clinical advice, and the extent to which the clinician could be incorporated into the virtual reality as part of the procedure.

However, researchers believe that this method could be a useful tool for clinicians. “Now that virtual reality is available as a consumer product, with high quality at less than the cost of a good Smartphone, this method could be widely used by clinicians, for example, by giving ‘homework’ to their clients to carry out this type of method at home,”, said Mel Slater.