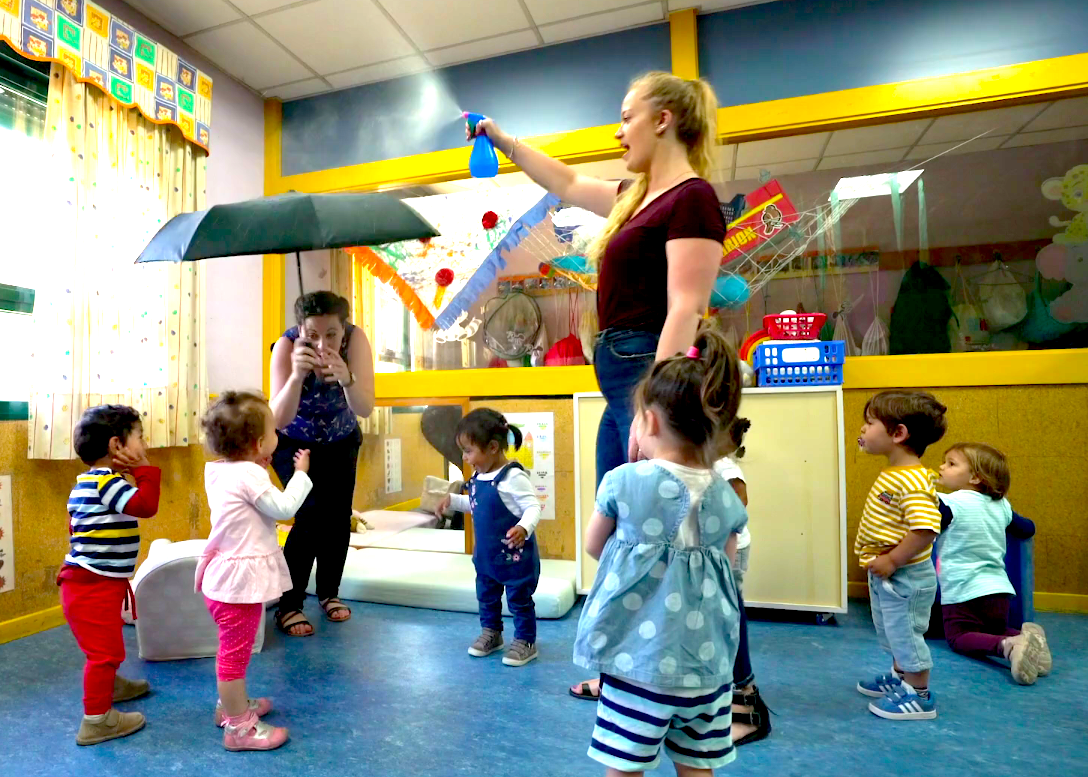 Knowledge of multiple languages has long been shown to have lifelong benefits, from enhancing communication skills to boosting professional opportunities to staving off the cognitive effects of aging.

When researchers at the University of Washington found that even babies whose parents are monolingual could rapidly learn a second language in a small classroom environment, a new challenge was born:

How could they expand their program?

One answer, the UW team found, was to create software that would train language tutors online — allowing the researchers’ curriculum and method to be replicated anywhere in the world.

A new study by UW’s Institute for Learning & Brain Sciences, or I-LABS, part of researchers’ ongoing work with infant education centers in Spain, not only found that bilingual teaching led to sustained English-language comprehension and vocabulary-building, but also that the method could be scaled up to serve more, and more economically diverse, children.

“We knew our research-based method worked to boost second language skills rapidly in infants, without negatively affecting their first language, but the question was, how can we train people worldwide to use it? Here, we show that online training works,” said Naja Ferjan Ramírez, the lead author of both studies who is a new assistant professor of linguistics at the UW and a former I-LABS research scientist.

The study, published online Jan. 22 in Mind, Brain, and Education, extends previous research that examined whether and how infants can learn a second language in the context of an early education center, if they don’t get that exposure at home. That 2017 study involved 280 children at four infant education centers in Madrid, Spain, and showed the effects of an interactive, play-based English-language program, compared to the standard bilingual program already available in Madrid schools.

The new study used the same curriculum but trained tutors differently, using an online program called SparkLing developed by I-LABS researchers. By testing a remote form of teacher training and providing lessons to larger groups of children, researchers explored how to spread the benefits of bilingual education across a wider population.

The I-LABS bilingual curriculum emphasizes social interaction, play and quality and quantity of language from teachers. The approach uses parentese, a slow, clear speaking style that often involves exaggerated vowels and intonation. Researchers created the SparkLing software in order to reach language tutors wherever they live. In the 2017 study, for example, tutors were trained at I-LABS. But to bring this method to entire schools or communities online training was essential, researchers said.

In the new study, over 800 children in 13 infant education centers participated. The team grouped children, from ages 9 months to 33 months, into age-specific classes and focused on schools with much lower socioeconomic populations than were tested in the previous study.

“One of the most exciting aspects of the study is that we did our work in some of the very poorest neighborhood schools in Madrid, and we’re thrilled to show that these children learn as impressively as those from more affluent neighborhoods. All children, given the right stimulation at the right time, can learn,” said Patricia Kuhl, co-director of I-LABS and co-author of the paper.

Children’s Spanish and English skills were assessed at the beginning of the study, midway through the school year and at the end of the year. Older children used a touch-screen based word-comprehension assessment tool in Spanish and English, matching words and pictures, and answering questions. All of the children also wore special vests outfitted with lightweight recorders to record any English words uttered by the infants during the 45-minute, daily language sessions.

About half of the children continued their lessons for an additional 18 weeks. At the end of that period, assessments showed that children who continued the lessons also continued to rapidly advance their second-language comprehension and production skills, while the group that returned to the original classroom maintained the English skills acquired after the first 18 weeks.

“Parents worldwide have a common problem: They want their children to speak a second language, but many don’t speak that language themselves. We know that zero to 5 is a critical age, a window of opportunity for second language learning, and our newest study shows that when teachers in early education classrooms are trained online to use our method and curriculum, children’s learning seems almost magical,” said Kuhl, who is also a UW professor or speech and hearing sciences.

The researchers now hope to begin using this method in the United States, where about one-quarter of children are raised in homes where a language other than English is spoken.

The study was supported by the Madrid Ministry of Education, Youth, and Sports; the UW I-LABS Ready Mind Project; and the Bezos Family Foundation.