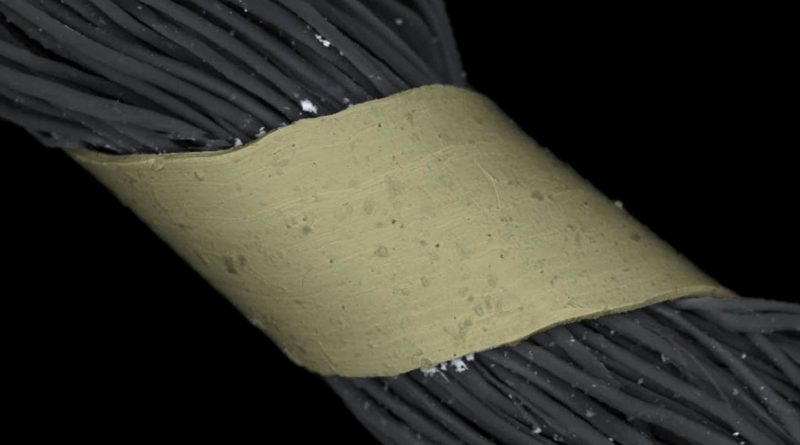 SAN DIEGO, Aug. 27, 2019 — When it comes to historical fashion, nothing stands out more than an item woven with shiny metal threads. These threads have been woven into textiles since ancient times and have been used by cultures around the world. However, the historical record has limited insight into how these materials were made, and conservation efforts limit scientists’ ability to obtain samples because many methods are destructive. Today, researchers report their progress toward a new, less damaging methodology for analyzing metal threads.

The researchers will present their results at the American Chemical Society (ACS) Fall 2019 National Meeting & Exposition. ACS, the world’s largest scientific society, is holding the meeting here through Thursday. It features more than 9,500 presentations on a wide range of science topics.

century Italian textile using a proteomics-based approach,” says Caroline Solazzo, Ph.D., who is one of the project’s principal investigators. Her team published a study last year characterizing the protein-containing membranes and adhesives in the threads of this artifact, which were made from animal products such as cow hide and pig intestine. Now, the team is reporting on their investigation into the exact composition of metal fibers of this and other historical objects.

“Conservation science is a unique area of chemistry research,” says Aleksandra Popowich, Ph.D., who is presenting the work at the meeting. “We are using microscopy techniques that allow us to build a 3D view of the threads, so we can see things like layering and micro-structure that give us insight into when and how the fibers were made.” Both Solazzo and Popowich are researchers at the Smithsonian’s Museum Conservation Institute, a center for specialized technical collections research and conservation of artistic, anthropological, biological and historical artifacts.

While decorative metal threads have been a subject of historical research interest for decades, studies to determine their manufacture and makeup have relied on cross-section analysis to view the internal metal structure. The current study, however, was driven by the desire to maintain the integrity of artifacts.

For this particular work, Popowich and her Smithsonian colleagues Thomas Lam, Ph.D., and Edward Vicenzi, Ph.D., obtained 30 samples from the Fashion Institute of Technology. The samples originated from Europe, Asia and the Middle East, and some of them were nearly 1,000 years old. The types of threads were diverse; some were strips of metal, others were strips of paper wrapped around fibers. Many of the pieces were religious textiles, such as vestments, demonstrating the cultural and historical importance of metal threadwork.

To get a closer look, the researchers developed a strategy that combined energy dispersive X-ray spectroscopy and correlated micro X-ray fluorescence. Together, the methods provided a high-resolution map of the threads’ elemental composition and thickness. These techniques only required a few micrograms of material, leaving most of the threads intact for future conservation efforts.

The resulting surface images and cross-sections showed that most threads had a combination of gold, silver and sometimes copper or zinc, creating a layered structure that highlighted the intricacy of the craftsmanship. The researchers learned that some thread-making techniques vary by culture, but other methods did not change much over time. For example, data from two French threads, one from the 16

century and one from the 18

century, showed that the process of rolling super-thin metal wires and wrapping them around a core material was largely unchanged between those years. In addition, the measurements taken using this method align with historic sources and data from computer simulations.

With this pilot investigation completed, the researchers plan to further develop this strategy to the point where they do not need to destroy a piece of the sample at all. This advance could open up the list of artifacts for study to include those that are too culturally important to damage for the sake of research. Such a method could also expand their work to include other materials, such as gilt leather, tapestries or gilded furniture.


A press conference on this topic will be held Tuesday, Aug. 27, at 3 p.m. Pacific time in the San Diego Convention Center. Reporters may check-in at the press center, Room 14B, Mezzanine Level, or watch live on Youtube

and the Sprague Endowment.

Decorative metal threads have been woven into textiles since ancient times to portray wealth and sociocultural importance. Often made of gold, silver, or alloys, the technique of manufacturing metal threads varied with resources, culture, and time. Unfortunately, these fabrication methods remain elusive, as little is described in written historical sources, and studies have been limited by number of threads, instrument sensitivity, or sample preparation method.

There is considerable interest in identifying the metals used in these precious threads, as the composition of the metal and gold/silver ratios are possible identifiers of provenance.

A highly sensitive analytical method was developed to characterize the chemical composition of ancient metal threads using scanning electron microscopy with energy dispersive X-ray spectroscopy (SEM-EDX) and correlated micro X-ray fluorescence (micro-XRF) mapping. These complementary techniques provide a quantitative two-dimensional map the elemental composition with high spatial resolution, which contains valuable information about the thickness of the strips/wires, metal coating, chemical heterogeneities, and identification of surface coatings and corrosion products. The surface and cross sections of threads ranging from 12th century Japanese gilt-paper threads to 18th century French solid metal strips, were analyzed using the developed method to determine what production techniques were used, and as a basis for establishing a relationship between gold/silver ratios and trace elements patterns and the provenance of the threads. Most threads contained multiple layers, frequently gold, silver, copper, or zinc bulk layers were detected, and both gilt and drawn-and-pulled strips were observed. This unique application of spectroscopic mapping is indispensable for investigating the origin and fabrication of ancient metal threads, providing insight into the cultural and historical significance of these textiles and the development of metallurgy and gilding technology.

This part of information is sourced from https://www.eurekalert.org/pub_releases/2019-08/acs-uth071819.php