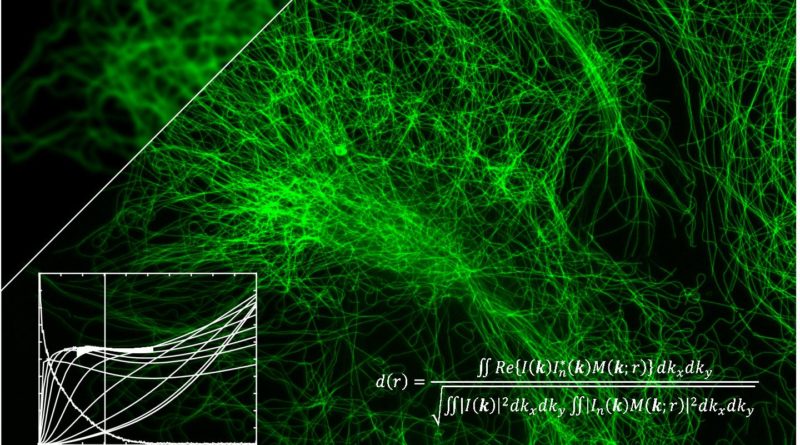 Thanks to the advent of super-resolution microscopes some 30 years ago, scientists can observe subcellular structures, proteins and living tissue with unprecedented precision. These microscopes operate by measuring the fluorescent light that some compounds emit naturally or the light emitted by artificial fluorophores, and by exploiting various quantum properties of the fluorophore, can deliver a resolution smaller than the one imposed by the diffraction limit. One problem is that image quality varies considerably with the particular instrument being used and its settings – such as how powerful the laser is and how the individual components are aligned – as well as with the proprieties of the sample being studied.

A team of scientists at EPFL’s Laboratory of Nanoscale Biology, headed by Aleksandra Radenovic in the School of Engineering, has developed an algorithm that can estimate a microscope’s resolution in just a few seconds based on a single image. The algorithm’s result indicates how closely a microscope is operating to its full potential. This could be particularly useful for the automated microscopes that have started appearing in research labs. The team’s findings have just been published in

The scientists used Fourier’s transform as the basis for their algorithm, but they modified it so as to extract as much information as possible from a single image.

The algorithm performs the calculation in just a few seconds and generates a single number. “Researchers can compare this number with the microscope’s maximum possible resolution to see whether the instrument can work even better or modify the experimental conditions and observe how the resolution evolves” says Adrien Descloux, the study’s lead author.

The algorithm can be used with any kind of imaging modality, including super-resolution models. “Our technique is particularly promising for the emerging generation of automated microscopes, where a computer adjusts all their settings,” says Radenovic. Her lab’s algorithm is the first ever to allow researchers to estimate a microscope’s resolution from a single image. Previously two images were needed, and the results were subject to high uncertainty if the images were not correctly pre-processed.

So that their discovery can be used on a large scale, the algorithm has been made available as an open source Image plugin. Researchers can download the tool and directly obtain the algorithm estimate – showing them how closely their microscope is operating to its maximum resolution. “Our algorithm is universal. And because only one image is needed, it is particularly suited for fast optimization of imaging conditions, which is challenging when observing dynamic processes. Also, the method can be applied in the image processing, as feedback for optimization of the advanced image reconstruction algorithms,” concludes Descloux.

This part of information is sourced from https://www.eurekalert.org/pub_releases/2019-08/epfd-uas082619.php