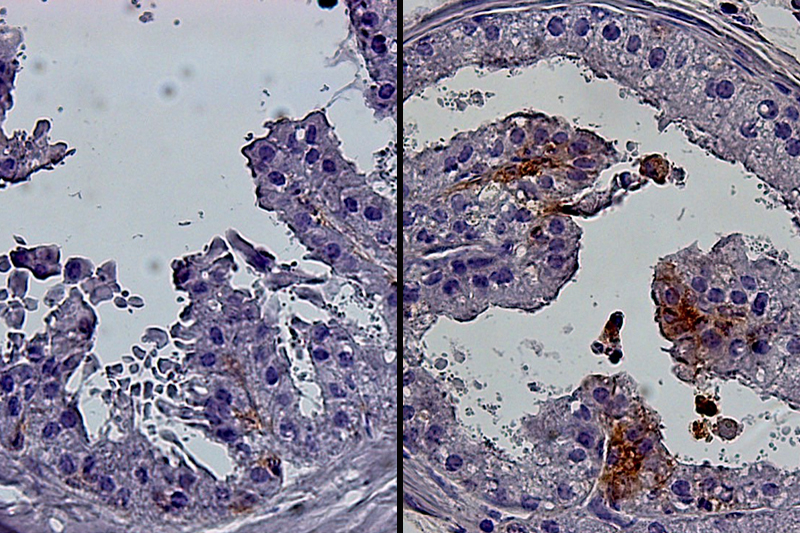 As the organ enlarges, the risk for cancer and other diseases increases

The observation, published in Cell Reports, helps explain why, as people age, the prostate tends to grow, leading to an increased risk for prostate cancer and other conditions.

“Understanding what’s causing the prostate to grow with age helps us to consider strategies to prevent the expansion of these cells and possibly reduce a person’s risk for prostate growth or disease,” said Andrew Goldstein, member of the Eli and Edythe Broad Center of Regenerative Medicine and Stem Cell Research at UCLA and a UCLA assistant professor of urology and of molecular, cell, and developmental biology.

Most organs in the body — including the kidneys, liver and spleen — lose mass as people age, and bone and muscle mass tend to decrease over time.

The prostate, however, typically grows with age, which is why more than half of men over age 60 have benign prostatic hyperplasia, or BPH, in which the enlarged prostate impinges on the urethra, the organ that carries urine out of the bladder.

Whether levels of stem cells or progenitor cells in the prostate changed with age was not previously known.

In the new work, Goldstein and his colleagues compared the prostates of two groups of mice: 3-month-olds (an age comparable to human young adults) and 24-month-olds (roughly equivalent to 80 human years). The prostates of the older mice were larger and heavier, and had more cells than those of younger mice.

“We thought it was a real possibility that older cells would have a reduced capacity to generate prostate tissue when we took them out of the prostate,” said Goldstein, who is also a member of the UCLA Jonsson Comprehensive Cancer Center. “So it was a surprising and important finding that there’s really no difference between old cells and young cells in their ability to form prostate tissue.”

The higher concentration of luminal progenitors, coupled with their maintained ability to form new tissue, helps explain why the prostate grows with age and why the risk of prostate cancer and benign prostatic hyperplasia increase: Both are associated with the growth of cells.

“One of the biggest questions we have now is what is causing this age-related increase in the number of luminal progenitor cells,” Goldstein said. “We have a few hypotheses but it remains to be seen what’s really happening.”

Answering that question, he said, could help identify a way to curb the growth of luminal progenitor cells and, in turn, prevent or treat prostate cancer or benign prostatic hyperplasia. It also could inform scientists better about why other organs lose mass with age.

Funding for the study was provided by the American Cancer Society, the Department of Defense, the Margaret E. Early Medical Research Trust, STOP CANCER and the National Cancer Institute.