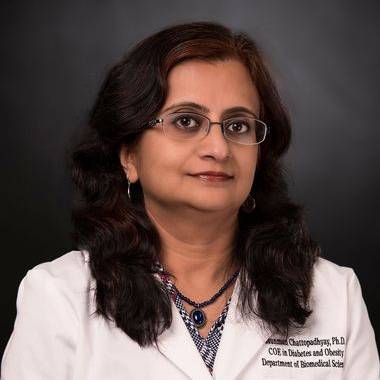 Dr. Chattopadhyay is a faculty researcher in the university’s Center of Emphasis in Diabetes and Metabolism within the Department of Molecular and Translational Medicine. Her research focuses on diabetes-related complications, which are a major health issue for El Paso’s diverse border population.

The Marsh Foundation grant will fund her research on gastroparesis, a rare but serious digestive disorder that prevents or delays the stomach from emptying food, leading to complications that include dehydration from vomiting, malnutrition and increased blood sugar levels that can worsen diabetes.

The most commonly known cause of gastroparesis is diabetes, a disease that can damage the vagus nerve that controls the muscles of the stomach. Diabetes is a major health issue in El Paso County, Texas, where 14% of adults have been diagnosed with diabetes, compared to 10.5% nationally, according to the Paso del Norte Health Foundation. Other underlying causes of gastroparesis include hypothyroidism and viral infections of the stomach.

For reasons not well understood, gastroparesis affects women more than men. According to the National Institute of Diabetes and Digestive and Kidney Diseases, out of every 100,000 people in the U.S., about 10 men and about 40 women have gastroparesis.

“A growing number of teenage girls and women suffer from gastroparesis,” Dr. Chattopadhyay said. “To increase the understanding of this disorder, my study will help compile new and significant data on how this disorder affects people with diabetes, and also why it is more prevalent in women compared to men.”

Dr. Chattopadhyay’s project will involve the analysis of biopsy samples from gastroparetic (patients diagnosed with the disease) and non-gastroparetic patients to better understand the physiological processes associated with the disease. She will identify molecular markers that could be used to help improve treatment options for people with gastroparesis.

The Edward N. and Margaret G. Marsh Foundation was established under the last will and testament of El Paso, Texas resident Edward Norton Marsh, who passed away in 1982. The foundation, which primarily supports El Paso-based organizations, provides funding for charitable, scientific, literary and educational purposes, with special attention to medical research.