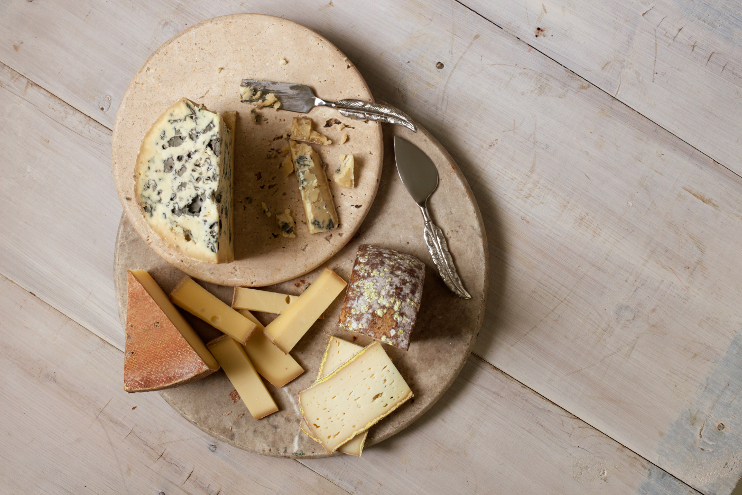 MEDFORD/SOMERVILLE, Mass. (October 16, 2020)— Researchers at Tufts University have found that those distinctly funky smells from cheese are one way that  fungi communicate with bacteria, and what they are saying has a lot to do with the delicious variety of flavors that cheese has to offer. The research team found that common bacteria essential to ripening cheese can sense and respond to compounds produced by fungi in the rind and released into the air, enhancing the growth of some species of bacteria over others. The composition of bacteria, yeast and fungi that make up the cheese microbiome is critical to flavor and quality of the cheese, so figuring out how that can be controlled or modified adds science to the art of cheese making.

The discovery, published in Environmental Microbiology, also provides a model for the understanding and modification of other economically and clinically important microbiomes, such as in soil or the gastrointestinal tract.

“Humans have appreciated the diverse aromas of cheeses for hundreds of years, but how these aromas impact the biology of the cheese microbiome had not been studied,” said Benjamin Wolfe, professor of biology in the School of Arts and Science at Tufts University and corresponding author of the study. “Our latest findings show that cheese microbes can use these aromas to dramatically change their biology, and the findings’ importance extends beyond cheese making to other fields as well.”

Many microbes produce airborne chemical compounds called volatile organic compounds, or VOCs, as they interact with their environment. A widely recognized microbial VOC is geosmin, which is emitted by soil microbes and can often be smelled after a heavy rain in forests. As bacteria and fungi grow on ripening cheeses, they secrete enzymes that break down amino acids to produce acids, alcohols, aldehydes, amines, and various sulfur compounds, while other enzymes break down fatty acids to produce esters, methyl ketones, and secondary alcohols. All of those biological products contribute to the flavor and aroma of cheese and they are the reason why Camembert, Blue cheese and Limburger have their signature smells.

The Tufts researchers found that VOCs don’t just contribute to the sensory experience of cheese but also provide a way for fungi to communicate with and “feed” bacteria in the cheese microbiome. By pairing 16 different common cheese bacteria with 5 common cheese rind fungi, the researchers found that the fungi caused responses in the bacteria ranging from strong stimulation to strong inhibition. One bacteria species, Vibrio casei, responded by growing rapidly in the presence of VOCs emitted by all five of the fungi. Other bacteria, such as Psychrobacter, only grew in response to one of the fungi (Galactomyces), and two common cheese bacteria decreased significantly in number when exposed to VOCs produced by Galactomyces.

The researchers found that the VOCs altered the expression of many genes in the bacteria, including genes that affect the way they metabolize nutrients. One metabolic mechanism that was enhanced, called the glyoxylate shunt, allows the bacteria to utilize more simple compounds as “food” when more complex sources such as glucose are unavailable. In effect, they enabled the bacteria to better “eat” some of the VOCs and use them as sources for energy and growth.

“The bacteria are able to actually eat what we perceive as smells,” said Casey Cosetta, post-doctoral scholar in the department of biology at Tufts University and first author of the study. “That’s important because the cheese itself provides little in the way of easily metabolized sugars such as glucose. With VOCs, the fungi are really providing a useful assist to the bacteria to help them thrive.”

There are direct implications of this research for cheese producers around the world. When you walk into a cheese cave there are many VOCs released into the air as the cheeses age. These VOCs may impact how neighboring cheeses develop by promoting or inhibiting the growth of specific microbes, or by changing how the bacteria produce other biological products that add to the flavor. A better understanding of this process could enable cheese producers to manipulate the VOC environment to improve the quality and variety of flavors.

The implications of the research can even extend much further. “Now that we know that airborne chemicals can control the composition of microbiomes, we can start to think about how to control the composition of other microbiomes, for example in agriculture to improve soil quality and crop production and in medicine to help manage diseases affected by the hundreds of species of bacteria in the body,” said Wolfe.