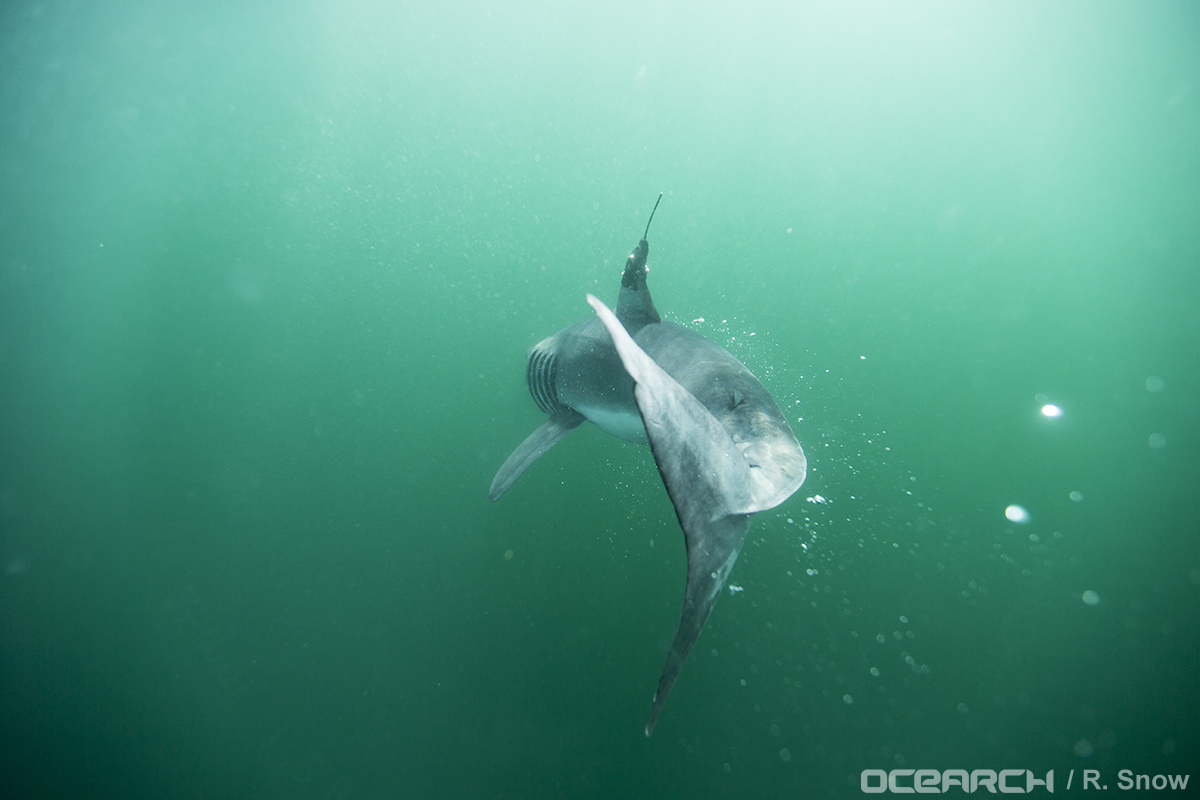 Uncovering detailed travel patterns and habitat use of sharks along and across shelf territories has been historically challenging – especially for most pelagic shark species – which remain offshore for most of their lives. Their vertical diving behavior has been a subject of inquiry for a long time, and for young sharks in particular, has remained elusive.

Using cutting-edge 3D satellite technology, a study led by Florida Atlantic University’s Harbor Branch Oceanographic Institute, in collaboration with NOAA’s National Marine Fisheries Service; OCEARCH; The South Fork Natural History Museum and Nature Center; and the Wildlife Conservation Society, is providing a unique look into how young white sharks in the North Atlantic Ocean travel and use their habitats. The study also is the first to provide fine-scale analysis of vertical movement behavior in young-of-year (1 to 2 years) and juvenile white sharks (Carcharodon carcharias) in the New York Bight, the only confirmed white shark nursery area in the entire North Atlantic Ocean.

Results published in the journal Frontiers in Marine Science, showed that across multiple years, the tagged young white sharks consistently displayed horizontal movements parallel to Long Island’s southern shoreline and the New Jersey coast and likely cling to these waters due to their summertime productivity. Horizontal movements ranged from the surf zone to more than 130 kilometers from shore; however, more than 90 percent of the sharks were positioned within 20 kilometers of Long Island’s southern shoreline, which further confirms the importance of this region to baby white sharks.

Data from the study simultaneously address many questions on the ecology, behavior and conservation of a highly mobile marine species that has been challenging to explore, and will inform ongoing preservation strategies for this vulnerable white shark population.

“We have known about the importance of nurseries for young sharks for some time, however, knowledge of the finer scale use of shelf systems by these animals has been limited. This lack of information impacts our understanding of potential shark ‘hotspots’ within these large ecosystems,” said Rachel Shaw, lead author, and a recent graduate from the Fisheries Ecology and Conservation (FEC) Lab, led by Matt Ajemian, Ph.D., co-author and an assistant research professor at FAU Harbor Branch.

Between 2016 and 2019, 21 young-of-year and juvenile white sharks were fitted with satellite and acoustic tags to examine their distribution and habitat selection during late summertime (August to October) in the New York Bight – the coastal region between Montauk, New York and Cape May, New Jersey. Movement data from the 21 young white sharks were collected (11 males and 10 females ranging in size from 54 to 61 inches in length) and linked to environmental measurements from remote sensing platforms.

“Undoubtedly, our research shows that young white sharks traverse variable oceanographic features across the continental shelf in the New York Bight, but they certainly have their habitat preferences,” said Shaw.

The vertical diving behavior and accompanying measurements showed that sharks encountered several areas across the shelf with thermally stratified water column structure. This was most evident around the Hudson Shelf Valley region where some of the coldest bottom temperatures were recorded during the summertime, and is indicative of the “cold pool” that sets up in this region. Further, young white sharks also selected areas with relatively high levels of productivity (i.e., mesotrophic waters) as reflected by salinity and chlorophyll-a concentration. Tagged individuals selected sea surface salinities slightly less saline than oceanic waters, which are typically associated with coastal areas.

Altogether, the research suggests young white sharks prefer nearshore habitats, but can exhibit connectivity between the immediate shoreline and mid-continental shelf region, where they play important ecological roles as apex predators on a variety of species. The study improves characterization of essential habitat for young white sharks and provides new insights into their reliance on this productive continental shelf ecosystem, which may provide them with the resources needed to grow quickly as well as a refuge from predators.

“While the northwest Atlantic white shark population appears to be recovering from historical overfishing, there is considerable uncertainty in their population dynamics, seasonal habitat preferences, ecological roles, and exposure to environmental impacts,” said Ajemian. “Understanding species-habitat relationships is critical for predicting the potential impacts of long-term environmental changes including climate change, which is disproportionately affecting this region.”