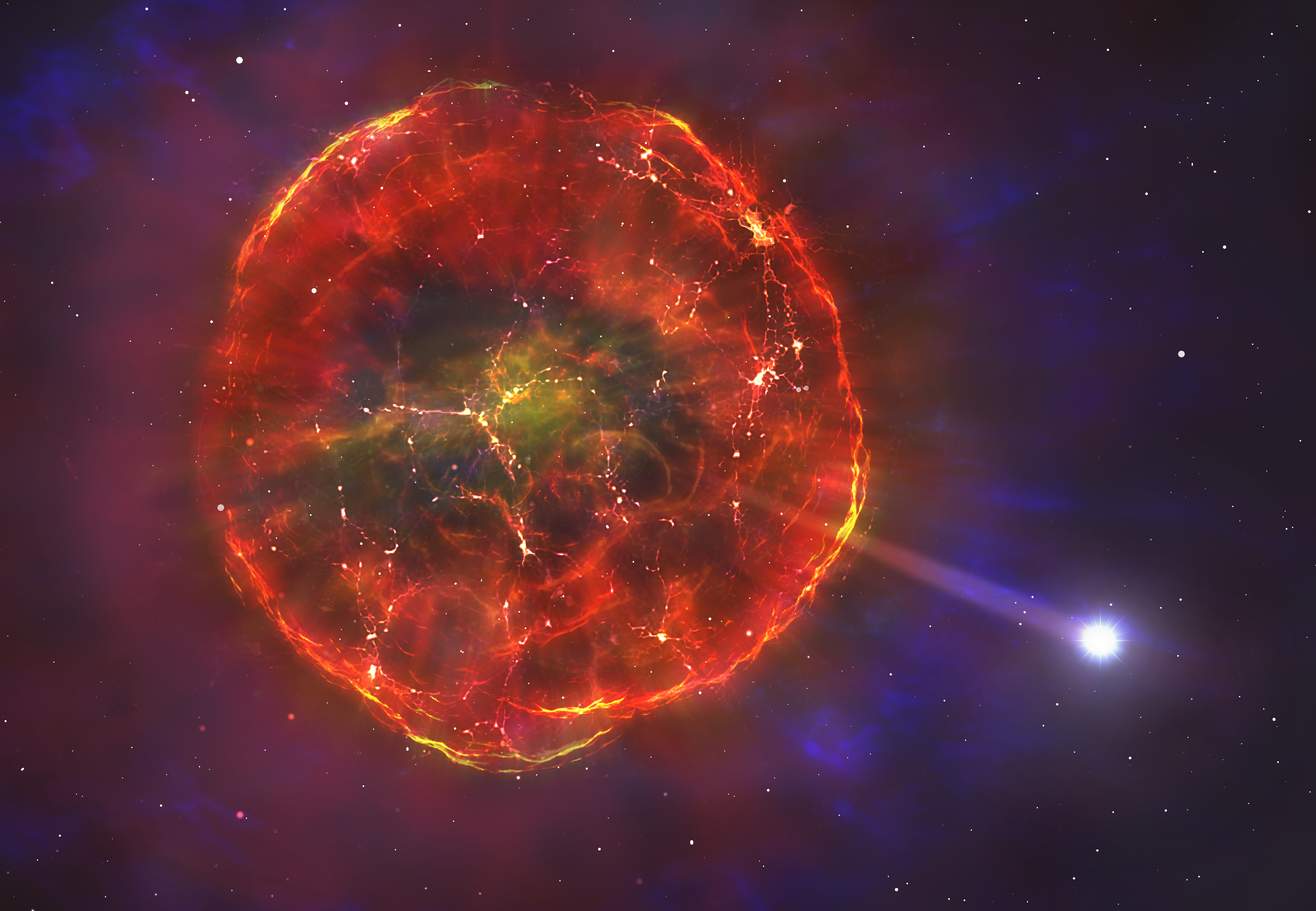 An exploding white dwarf star blasted itself out of its orbit with another star in a ‘partial supernova’ and is now hurtling across our galaxy, according to a new study from the University of Warwick.

It opens up the possibility of many more survivors of supernovae travelling undiscovered through the Milky Way, as well as other types of supernovae occurring in other galaxies that astronomers have never seen before.

Reported today (15 July) in Monthly Notices of the Royal Astronomical Society the research, funded by the Leverhulme Trust and Science and Technology Facilities Council (STFC), analysed a white dwarf that was previously found to have an unusual atmospheric composition. It reveals that the star was most likely a binary star that survived its supernova explosion, which sent it and its companion flying through the Milky Way in opposite directions.

White dwarfs are the remaining cores of red giants after these huge stars have died and shed their outer layers, cooling over the course of billions of years. The majority of white dwarfs have atmospheres composed almost entirely of hydrogen or helium, with occasional evidence of carbon or oxygen dredged up from the star’s core.

This star, designated SDSS J1240+6710 and discovered in 2015, seemed to contain neither hydrogen nor helium, composed instead of an unusual mix of oxygen, neon, magnesium and silicon. Using the Hubble Space Telescope, the scientists also identified carbon, sodium, and aluminium in the star’s atmosphere, all of which are produced in the first thermonuclear reactions of a supernova.

However, there is a clear absence of what is known as the ‘iron group’ of elements, iron, nickel, chromium and manganese. These heavier elements are normally cooked up from the lighter ones, and make up the defining features of thermonuclear supernovae.  The lack of iron group elements in SDSSJ1240+6710 suggests that the star only went through a partial supernova before the nuclear burning died out.

The scientists were able to measure the white dwarf’s velocity and found that it is travelling at 900,000 kilometres per hour. It also has a particularly low mass for a white dwarf – only 40% the mass of our Sun – which would be consistent with the loss of mass from a partial supernova.

Lead author Professor Boris Gaensicke from the Department of Physics at the University of Warwick said: “This star is unique because it has all the key features of a white dwarf but it has this very high velocity and unusual abundances that make no sense when combined with its low mass.

“It has a chemical composition which is the fingerprint of nuclear burning, a low mass and a very high velocity: all of these facts imply that it must have come from some kind of close binary system and it must have undergone thermonuclear ignition. It would have been a type of supernova, but of a kind that that we haven’t seen before.”

The scientists theorise that the supernova disrupted the white dwarf’s orbit with its partner star when it very abruptly ejected a large proportion of its mass. Both stars would have been carried off in opposite directions at their orbital velocities in a kind of slingshot manoeuvre. That would account for the star’s high velocity.

Professor Gaensicke adds: “If it was a tight binary and it underwent thermonuclear ignition, ejecting quite a lot of its mass, you have the conditions to produce a low mass white dwarf and have it fly away with its orbital velocity.”

SDSSJ1240+6710 may be the survivor of a type of supernova that hasn’t yet been “caught in the act”. Without the radioactive nickel that powers the long-lasting afterglow of the Type Ia supernovae, the explosion that sent SDSS1240+6710 hurtling across our Galaxy would have been a brief flash of light that would have been difficult to discover.

Professor Gaensicke adds: “The study of thermonuclear supernovae is a huge field and there’s a vast amount of observational effort into finding supernovae in other galaxies. The difficulty is that you see the star when it explodes but it’s very difficult to know the properties of the star before it exploded.

“We are now discovering that there are different types of white dwarf that survive supernovae under different conditions and using the compositions, masses and velocities that they have, we can figure out what type of supernova they have undergone. There is clearly a whole zoo out there. Studying the survivors of supernovae in our Milky Way will help us to understand the myriads of supernovae that we see going off in other galaxies.”

Professor S.O. Kepler of Universidade Federal do Rio Grande do Sul, Brazil, and who originally discovered this star, said: “The fact that such a low mass white dwarf went through carbon burning is a testimony of the effects of interacting binary evolution and its effect on the chemical evolution of the Universe.”

Dr Roberto Raddi of Universitat Politècnica de Catalunya, Spain, who carried out the kinematic analysis, said: “Once again, the synergy between very precise Gaia astrometry and spectroscopic analysis have helped to constrain the striking properties of a unique white dwarf, which probably formed in a thermonuclear supernova and was ejected at high velocity as consequence of the explosion.”

STFC funds and supports research in particle and nuclear physics, astronomy, gravitational research and astrophysics, and space science and also operates a network of five national laboratories, including the Rutherford Appleton Laboratory and the Daresbury Laboratory, as well as supporting UK research at a number of international research facilities including CERN, FERMILAB, the ESO telescopes in Chile and many more. Visit https://stfc.ukri.org/ for more information. @STFC_Matters

About the Leverhulme Trust
The Leverhulme Trust was established by the Will of William Hesketh Lever, the founder of Lever Brothers. Since 1925 the Trust has provided grants and scholarships for research and education. Today, it is one of the largest all-subject providers of research funding in the UK, currently distributing £100 million each year. For more information about the Trust, please visit www.leverhulme.ac.uk and follow the Trust on Twitter @LeverhulmeTrust