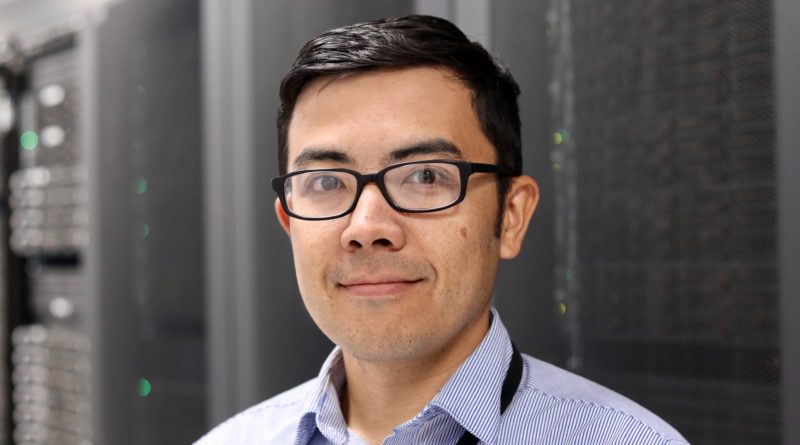 Quarks and gluons are elementary particles that make up everything you see before you, including yourself, and Nobuo Sato wants to know how. At the Department of Energy’s Thomas Jefferson National Accelerator Facility, he will be tackling this question as the recipient of the JSA/Jefferson Lab Nathan Isgur Fellowship for Nuclear Theory.

Sato’s fellowship began in October and will last three years. The appointment is intended to further the early career of a person displaying extraordinary scientific ability, allowing the recipient to pursue independent research in theoretical physics at Jefferson Lab.

“It’s very encouraging that they love the scientific work I’ve been doing enough to support my research in the upcoming years,” said Sato, who is the fifth fellow since the program began in 2003.

Jefferson Lab and the Southeastern Universities Research Association established this fellowship as a memorial to the late Nathan Isgur, who served as head of Jefferson Lab’s Theory Group and as chief scientist until his death in 2001. The program now continues with joint funding from the Jefferson Science Associates Initiatives Fund and Jefferson Lab. The JSA Initiatives Fund supports activities that further the scientific outreach; promote the science, education and technology of Jefferson Lab; and benefit the lab’s extended user community in ways that complement the lab’s basic and applied research missions.

“I have very ambitious ideas for this project, and if I had to balance between a teaching position and research, those ideas might not happen,” said Sato. “But this fellowship is a very unique opportunity to spend 100% of my time in trying to achieve those goals, which are aligned with the mission of the lab.”

And what big goals they are! Sato wants to know how quarks and gluons form most of the matter that we see in our daily lives.

“It might be too ambitious, but without having ambition you will never even take the first steps, so I hope I will be able to accomplish at least something significant,” he said.

“The history of science is based on trying to find out what exactly made us all,” Sato said. “And it’s not enough to say it’s just quarks and gluons, because there is a huge gap in knowledge right now going from quarks and gluons to hadrons.”

Hadrons are made of quarks. Protons and neutrons, which occupy the center of every atom of matter, are both species of hadrons. Confoundingly, although built of quarks, these quarks alone cannot account for all the properties of hadrons.

Take mass, for example. Adding up the masses of all the quarks inside a hadron does not equal the mass of the hadron. It’s much, much less; so, where exactly does the rest of that mass come from? The same situation occurs with a hadron’s spin: it isn’t equal to the spins of its constituent quarks.

To account for all of the properties of hadrons, you need to include gluons. Gluons act like a glue to hold the quarks together (as their name might suggest).

“A major challenge at the lab is to be able to understand how these quarks and gluons create these emergent phenomena that are observed as these hadrons, and how their properties somehow arise from the theory of strong interactions: Quantum Chromodynamics,” Sato said.

To achieve his ambitious goals, Sato will bridge theory and experiment. He’ll, as he calls it, “poke” his questions by applying a theoretical framework based on Quantum Chromodynamics to experimental data. However, because his questions are not simple, the answers are not easily found via experiment.

“It’s not like, Oh, if you measure these, you answer this question. It doesn’t work that way,” Sato said. Instead, he must use different theoretical approaches to analyze experimental data. The measurements he considers will depend on the lens of the theory he’s using to look at the data with.

“I’m trying to approach these questions from different points of view,” he said.

“I’ve been at Jefferson Lab for a long time and I’m familiar with this setting, so this project is going full steam ahead,” he said.

Ultimately, Sato’s desire to answer how these particles collectively form all objects is what fuels him.

“I’m really happy that for my career I ended up asking a very interesting and exciting question that today is still largely unknown,” Sato said. “We have a problem, and it’s not a simple textbook problem. It’s an entire program that requires millions of dollars invested in machines and many people working together for a glimpse of understanding. I think that’s what captured my curiosity.”

Jefferson Lab recently announced the expansion of its fellowship programs to foster innovation and growth in nuclear and accelerator physics. Fellowship recipients are expected to take a leadership role in nuclear physics and accelerator research and will receive a three year appointment at the lab, as well as research support to assist in the conduct of advanced research in their field. Applications are now being accepted for the Nathan Isgur Postdoctoral Fellowship in Nuclear Experiment and for the Hermann Grunder Postdoctoral Fellowship in Accelerator Science.