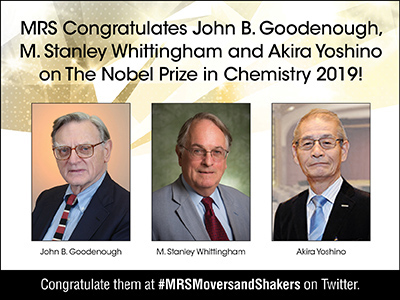 This Nobel Prize is very much a materials science prize. The development of lithium-ion batteries has crucially depended on advances in materials. This is seen from Whittingham’s development of titanium disulfide intercalated with lithium (Li) ions for use as a cathode in the first functional Li battery, to Goodenough’s use of cobalt oxide with intercalated Li ions to improve performance, to Yoshino’s use of petroleum coke to intercalate Li ions to create the first commercial battery. These materials developments have led to the current ubiquitous use of Li-ion batteries to power our world, changing our lives enormously.

Goodenough has been active MRS member and author since the late 1980s, serving on several MRS Awards Committees. He was awarded the Materials Research Society’s highest honor, the Von Hippel Award, in 1989. The award recognizes those qualities most prized by materials scientists and engineers—brilliance and originality of intellect, combined with vision that transcends the boundaries of conventional scientific disciplines.

Whittingham has been an enthusiastic and committed MRS member, author and volunteer since the late 1980s. Currently serving on the Editorial Boards of both MRS Bulletin and MRS Energy & Sustainability, he has also chaired the Academic Affairs Committee and the University Chapters and Special Projects Subcommittee. He has also been strong advocate for MRS education and outreach programs, participating in both the Strange Matter and Making Stuff—Stronger, Smaller, Cleaner, Smarter efforts. Whittingham was named MRS Fellow in 2013 and in 2018 was awarded the David Turnbull Lectureship, which recognizes the career of a scientist who has made outstanding contributions to understanding materials phenomena and properties through research, writing and lecturing, as exemplified by the life work of David Turnbull.

“The Materials Research Society extends its sincerest congratulations to the 2019 recipients of the Nobel Prize in Chemistry—John B. Goodenough, M. Stanley Whittingham and Akira Yoshino,” states MRS President, Michael R. Fitzsimmons. “Their development of the lithium-ion battery has, indeed, created “the rechargeable world” and revolutionized our lives. It is a win for chemistry and materials science!”

The Nobel Prizes will be awarded during a ceremony in Stockholm, Sweden, on December 10, the anniversary of Alfred Nobel’s death.