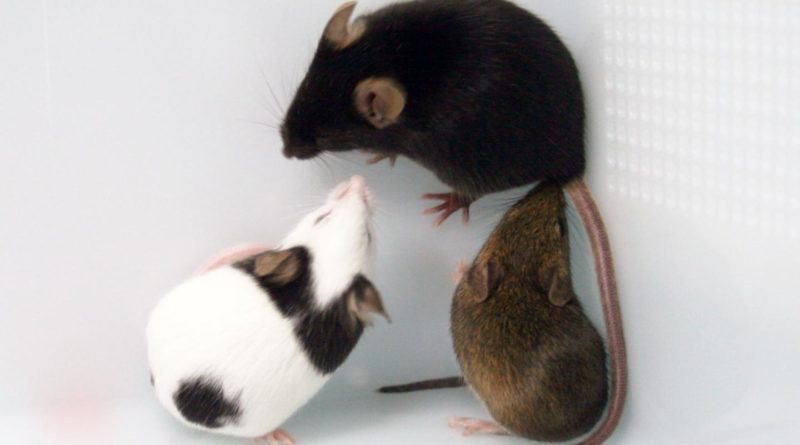 For the past few hundred years, the colorful hair and unique patterns of the so-called “Fancy Mouse” have made them the stars of pet shows in Japan and beyond. Now, scientists have finally revealed the true cause of the genetic mutation responsible for the iconic black pigmentation in the popular East Asian pet.

Their findings were published on August 2, 2019 in

All mammals possess an “agouti gene,” which controls the distribution of melanin pigment that determines the color of hair, skin and eyes. The dominant A allele — the variant form of a gene that gives rise to specific physical traits — restricts black pigmentation, and its presence in wild mice results in an “agouti mouse” with a coat comprised of black and yellow banded hairs. “Nonagouti mice,” by contrast, possess two a/a alleles due to a hypomorphic mutation of the agouti gene. This mutation causes an almost entirely loss of gene function, resulting in the mouse’s coat consisting of only black hair.

In addition to being popular pets, nonagouti mice have been used for a variety of studies into the mechanism and role of pigmentation and the production, storage and distribution of melanin, as well as the link between coat color and behavior.

“Nonagouti mutation is one of the most famous, classical mutations in mouse genetics. Until now, it has been thought that the insertion of a single retrovirus, called VL30, into the gene responsible for expressing hair color is the cause of the nonagouti mutation that results in black coat color in East Asian mice,” said study co-author, Tsuyushi Koide, an associate professor in the Mouse Genomics Resource Laboratory at the National Institute of Genetics (NIG), and the Department of Genetics, SOKENDAI (The Graduate University for Advanced Studies) in Japan.

In the study, another endogenous retrovirus, known as β4, was found in VL3, and β4, but not VL30, interrupts the agouti gene expression. The researchers used a genome editing technique whereby the genome DNA sequence is efficiently inserted or removed to effect a change or mutation. By using these ‘molecular technique’ to precisely target and delete the β4 retrovirus located within the VL30 virus on the DNA strand of fertilized mouse eggs that were then inserted into pseudopregnant female mice, the coat color of the neonatal pups was changed from nonagouti (black hairs) to agouti (black and yellow banded hairs). These results show that insertion of a new type of retrovirus β4 into the VL30 retrovirus is the true cause of black coat color, and not the VL30 alone.

After analyzing DNA samples from black (nonagouti) mice as well as a series of wild-derived strains, the researchers also found that the nonagouti trait originated from a line of East Asian mice that were most likely related to Japanese fancy mice.

“We found that the insertion of the β4 retrovirus into VL30 occurred in the lineage of Japanese fancy mice,” said Koide. “This mutation was then introduced into a variety of laboratory mice including a standard strain in the early days of mouse genetics.”

According to Koide, the insertion of the β4 retrovirus is also found in the gene that causes another type of classical mutation — piebald coloration — in mice. “The piebald mutation was also found in the Japanese fancy mice and is known to cause the characteristic black and white piebald pattern,” said Koide.

The authors speculated that the β4 retrovirus actively spread within the founder group of Japanese fancy mice. “It will be important to understand when and how β4 was infected into the mouse DNA and the genetic consequences of it amplifying and spreading into several genes that form part of the genetic makeup of the mouse,” said Koide.


About National Institute of Genetics (NIG)

was established to carry out broad and comprehensive research in genetics. NIG contributes to the development of academic research as one of the inter-university research institutes constituting the Research Organization of Information and Systems (ROIS).


About the Research Organization of Information and Systems (ROIS)

This part of information is sourced from https://www.eurekalert.org/pub_releases/2019-08/rooi-tmo082719.php