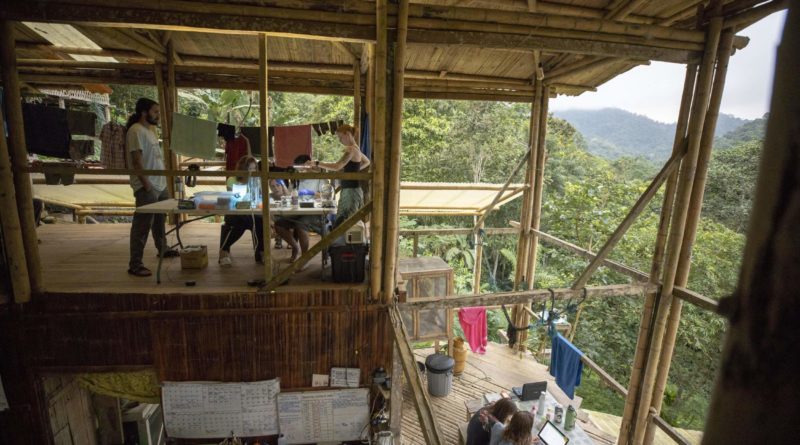 “In the jungle, you have to do things differently.”

It’s a simple statement, too simple to fully capture what Dr. David Rodriguez does. On the one hand, the cutting-edge technology he uses performs all the same functions as a normal on-campus molecular biology lab. On the other, Rodriguez is currently some 2,380 miles away from the university, with no internet access, no cellphone signal and very limited, intermittent electricity. His lab is set up on a folding table in a wall-less bamboo structure in the forests of coastal Ecuador.

Rodriguez is an assistant professor in Texas State University’s Biology Department. His specialty is host-pathogen dynamics — the relationship between living things, such as amphibians, and agents that infect them, in this case a group of microscopic fungi called chytrid (pronounced like “kit-rid”). Together with Ryan Lynch, executive director of local conservation nonprofit Third Millennium Alliance (TMA), and Dr. Shawn McCracken, educator at both TMA and Texas State, Rodriguez is studying the genetic diversity of a chytrid fungus species called Batrachochytrium dendrobatidis and the amphibians it infects.

The fungus, known as Bd for short, kills frogs and other amphibians by damaging their skin. A little surface-level damage may not sound so bad at first, but skin means everything to an amphibian. Frogs and their relatives not only take in oxygen through their skin but also use it to regulate the amount of salts and other chemicals within their bodies; in some ways, amphibian skin combines the functions of a human’s skin, lungs and kidneys. A Bd infection stops amphibians’ bodies from doing these vital tasks.

Amphibian deaths due to Bd infection, called chytridiomycosis, are at epidemic levels around the globe; National Geographic reported in March 2019 that the fungus is responsible for more destruction of biodiversity than any other known disease. Scientists around the world see the importance of studying this alarming phenomenon. Rodriguez, McCracken and Lynch have a unique angle on the problem.

“Our research is a little bit different from what other people are doing,” Rodriguez says, “in that we take a fungus-centric view of the system. Whereas a lot of people focus mostly on the host — on the amphibians — we actually look through the perspective of the pathogen.” What this means is that Rodriguez and his team need to analyze not only the frogs’ DNA but also the DNA of the Bd itself to see how the whole complex system interacts. Along the way, McCracken notes, “We also seek to train graduate students and expose undergrads to the cutting-edge molecular technology that can be employed with rigorous data collection methodologies in a challenging field environment.” On this trip there are three master’s students and eight undergraduates, all eager to be involved.

Rodriguez, McCracken and Lynch are performing this research in Ecuador because of the country’s enormous biodiversity. Although Ecuador is only about the size of Nevada, it’s home to around 620 species of amphibians, compared to around 230 in the U.S. and Canada combined. Specifically, the researchers are working in a protected area called the Jama-Coaque Reserve, which encompasses over 1,400 acres of land and a variety of habitats, including tropical dry forest, rainforest and cloud forest. This location is excellent for finding frogs for genetic analysis.

The on-site science starts with a collecting hike. Armed with headlamps, clean plastic bags, notebooks for recording data and a handheld GPS unit, the team heads out after nightfall, when frogs are more active. Some hikes are relatively easy, traversing a mainly level landscape. Others climb up steep slopes with cliff-like edges falling away into the unseen darkness, the paths made slick with ubiquitous mud.

“It was exhilarating,” says master’s student Bria Marty of her first collecting hike. “It was also one of the scariest things I’ve done in my life.”

Undergraduate AJ Sanjar went on a collecting trip that was less perilous than Marty’s, but longer. His group hiked for seven hours into the evening, and then he got up after only a couple hours of sleep in order to go bird banding the next morning. He was prosaic about it all: “Well, you gotta do what you gotta do to catch a frog.”

Once the frogs have been collected and each assigned a specimen number, the researchers gather data (non-fatally). They work at an assembly line of sorts, set up in an open-air classroom on the hill. Rodriguez starts by swabbing each frog’s skin to collect any microscopic Bd spores that may be present. Once he’s done, the swab goes into a numbered tube and the frog goes to Marty, who places it onto a small scale for weighing. After that, Rodriguez uses a sterile scalpel to carefully take a tissue sample from the frog’s toe; just like the swab, this sample goes into its own tube. Rodriguez then hands the frog to master’s student Chloe Reeves to measure its length. Lisa Koetke, also a master’s student, writes down each data point in a logbook, with everything keyed to the frog’s specimen number. Finally, Rodriguez takes photos of the frog (back and belly) for reference before returning the animal to its bag, which has air, water and vegetation inside. At night, they’ll return each frog to the wild using the GPS coordinates recorded earlier.

These skin swabs and toe tissues will give the researchers DNA to analyze — from both the frogs and, if present, the chytrid fungus. But not quite yet. Before they perform the actual DNA extraction, the group talks their way through each step, checking that they understand the purpose.

“In order for us to actually study DNA, what do we have to do?” Rodriguez asks the graduate students. Reeves responds quickly: “Break it out.”

DNA is a molecule that is essentially the coded instruction manual for how to build a living organism, passed down from one generation to the next. A strand of DNA, coiled up tightly, forms one chromosome. A living thing’s chromosomes — 23 pairs in humans, varying numbers in frog species — are located deep inside its cells. In other words, DNA is packaged securely in the middle of a lot of other tissue, hence the need to break it out.

Adding the right type of molecule can do this. Proteinase K is a naturally derived enzyme — a trigger for a chemical reaction — that biologists use to dissolve the proteins that surround a cell. “So proteinase K is like breaking the strings that tie everything together,” comments Marty. Once cells are released from the surrounding protein, a soapy reagent called cell lysis solution dissolves the cell and nuclear membranes. The next step is separating the DNA itself from the mixture of cellular debris. This means adding ethyl alcohol to draw out the DNA through a chemical reaction known as precipitation: pulling a solid (the clustered strands of DNA) out of a liquid solution (the watery cell soup). Next, the researchers will adjust the pH levels (called buffering), remove the alcohol and rehydrate the DNA with pure water, and add a chemical to prevent bacterial growth.

Talking through the steps in great detail, with insightful questions, takes Rodriguez and the students an hour, which is a worthwhile investment. “The toughest part of genetics is troubleshooting,” Rodriguez asserts. “If you don’t understand the fundamentals of what you’re running, it’s hard to troubleshoot.” That’s truer than ever when your lab is far off-campus and out of internet signal range.

A couple of days later, after more sample collection, the researchers start their DNA extraction and analysis. They set up on the open second floor of the reserve’s main bamboo house, out of the high-traffic areas downstairs. At the table, Rodriguez and Reeves take turns using micropipettors to add precise amounts of enzyme to the frog tissue samples.

If any of the sampled frogs are hosts to the Bd fungus, then the samples from their skin will contain the fungus’ DNA as well as their own, mixed up in a single tube. But geneticists have developed a way to make billions of copies of just the section of DNA they actually want. It involves a method called polymerase chain reaction, or PCR.

“PCR amplifies the DNA,” explains Koetke. “So you choose the part of the DNA you want to look at, and PCR duplicates it like what happens in a cell — pulls the DNA apart and puts another half on each piece.”

“Two into four, four into eight, eight into sixteen … ” interjects Reeves, from the lab table.

This will produce a large enough volume of known Bd genetic material to run other, more in-depth testing on. Likewise, if Rodriguez targets the PCR to a frog’s DNA, he can analyze its genetics as well.

After a lengthy process to prepare the products of the PCR for sequencing, the researchers put their samples into a stapler-sized DNA sequencer that connects through a USB cable to Rodriguez’s laptop. In real time, the sequencer reveals the order of the “letters” that make up the DNA’s code — the code for that one frog or that one fungus.

Deep, labor-intensive research projects of any kind can be nerve-racking, but there’s an extra level of stress for field research like this. It comes from the long-distance transportation of delicate equipment, the physically demanding and uncontrollable conditions, the limited infrastructure and limited time on the ground.

“If I screwed it up — if anything screws up — that’s it,” Rodriguez says. However, he says it with the retrospective matter-of-fact air of someone who has seen the readout scrolling across the laptop screen and knows that he did not, in fact, screw it up. The data are safe.

With these data, the researchers hope to get a better understanding of how Bd adapts to new environments — new ecological niches with new amphibian species to infect. “One of the questions that still remains for the study of Bd is explaining why we see differential dynamics in different areas,” Rodriguez explains. “In certain areas, you have what looks like a spreading pathogen, and in other areas you have what looks like an endemic pathogen that has been there for a long time. We still need to explain why we see these differences.”

Rodriguez looks forward to seeing advancements over the next few years. He’s also invested in seeing a more diverse scientific community contributing to that progress. “Coming from a Mexican family, what I do is strange — chasing after frogs and stuff,” he acknowledges. His research specialty came out of the opportunity to retrain from crocodilian studies to amphibian chytrid when he was awarded the National Science Foundation’s Minority Postdoctoral Research Fellowship. He turned that training opportunity into a career of exploring genetic diversity and mentoring the next generation of scientists.

“I want to help impart these wonderful experiences that I’ve had during my career to our students now,” he says of his work at Texas State. “I believe that these impactful field experiences are one way that we can encourage that.”

Horizon-broadening experiences like studying frog genetics in Ecuador are one way that undergraduate students get hooked on research. As more scientists with diverse backgrounds, new insights and unique talents join the collective pursuit of knowledge, we get better at understanding problems such as widespread chytrid infection. In turn, we get better at addressing those problems and finding ways of working together to preserve the wonders of life on earth.