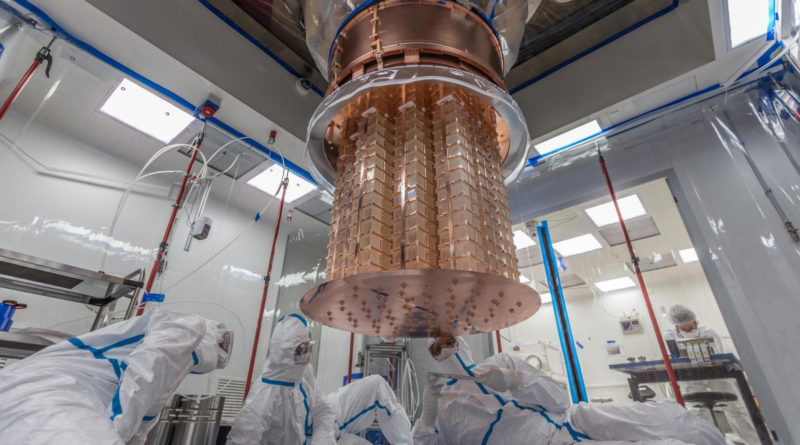 In an underground laboratory deep beneath a mountain in Central Italy, an array of crystals, chilled to within a hair of absolute zero – the coldest possible temperature in the universe – has been steadily compiling one of the most precise measurements to date in pursuit of a rare particle process. If it is proven to exist, this process may well be the “smoking gun” of how matter was created in the universe.

The experiment that is designed to seek out this process, called CUORE (Cryogenic Underground Observatory for Rare Events), is at Gran Sasso National Laboratories, part of the Italian National Institute for Nuclear Physics (INFN).

The observation of this process, known as neutrinoless double-beta decay, would have profound implications for understanding the properties of ghostly, abundant particles called neutrinos that pass through most matter unaffected. U.S. Department of Energy-supported nuclear physicists play a leading scientific and technical role in this experiment.

The latest results represent more than a 2-year span of data collection – from April 2017 to July 2019. This data set, which is about four times larger than the initial results announced in October 2017 (see a related article), sets even more stringent limits on the theoretical ultra-rare process that CUORE is designed to seek out.

Double-beta decay is a proven particle process in which two neutrons – uncharged particles in the nucleus, morph into two protons and emit two electrons and two antineutrinos – the antiparticles, or antimatter counterparts, to neutrinos.

CUORE is designed to detect the signature of a theoretical neutrinoless double-beta decay process in which no antineutrinos are created. This is because they would erase each other in the decay process, proving that the neutrino is its own antiparticle, as the Italian scientist Ettore Majorana hypothesized in 1937.

“We have now more than quadrupled the collected data, reaching one of the best sensitivities worldwide for the discovery of this rare particle process,“ said Oliviero Cremonesi, senior researcher at INFN Milano Bicocca and spokesperson of the CUORE Collaboration.

Yury Kolomensky, U.S. spokesperson for the CUORE collaboration and senior faculty scientist at the U.S. Department of Energy’s Lawrence Berkeley National Laboratory (Berkeley Lab), said, “The decay process in the CUORE crystals is a matter-creating process relevant to the Big Bang at the inception of our universe, and could help us to explain how matter won out over antimatter in its evolution.” Kolomensky is also a physics professor at UC Berkeley.

Discovery of this neutrinoless process would mean that a neutrino and an antineutrino, which are both electrically neutral, are essentially the same particle (called a Majorana neutrino) and only differ in a mirroring property known as helicity. Helicity is somewhat analogous to a person being either left-handed or right-handed, and a Majorana neutrino could switch handedness – akin to an ambidextrous person.

The CUORE detector array consists of 988 cube-shaped crystals made of a highly purified, natural form of tellurium dioxide that are stacked in 19 copper-cladded towers.

While no sign of neutrinoless double-beta decay is found in the data at this time, CUORE improved by a factor of two, compared to the previous results, the bound on the rate of this process in the nuclei of tellurium-130 atoms that are contained in the CUORE crystals. The interpretation of this result is a tighter bound on the allowed value of the neutrino mass in the Majorana hypothesis, which now extends below one-tenth of an electronvolt, at least 5 million times lighter than an electron.

The results incorporate a sophisticated new algorithm that helps to amplify CUORE’s detected signals while cutting out unwanted background “noise.” The algorithm helps identify and reject signals caused by small energy deposits in the detectors, such as those left by some other, well-known particle decays. This could provide a cleaner signature of neutrinoless double-beta decay.

The new algorithm would also allow CUORE to hunt for theoretical particles of dark matter known as WIMPs, or weakly interacting massive particles, in its nearly 1-ton detector.

“This is the largest, most sensitive detector of its kind in the world,” said Thomas O’Donnell, professor of physics at Virginia Tech University and a member of the CUORE Physics Board that organized and coordinated the data analysis. “Each month we are accumulating as much data as some detectors get in a year.”

CUORE’s latest results represent the largest data set collected by a particle detector that uses solid crystals, rather than the more common tank of liquid, in an effort to find this particle process. It is the first example of a solid-state detector with nearly a ton of mass.

Solid-state detectors have the ability to very accurately measure the energy of particle decays. But it is challenging to scale up a solid-state detector to very large sizes when compared to a liquid-based detector.

“We are delighted that we are now operating the detectors at close to 90% efficiency,” added Carlo Bucci, senior researcher at INFN’s Gran Sasso, who is the Italian spokesperson and technical coordinator of the experiment. “All of the work invested in the last two years to bring the system to this performance has paid off. Warming up and cooling back down takes several months, so we have to get it right each time.”

The crystal array is extremely sensitive to a very slight and narrow energy signature that is predicted for the neutrinoless decay process. Chilling the array to below minus 459 degrees Fahrenheit makes the entire array, which weighs about 1,650 pounds, sensitive to an incredibly slight rise in temperature arising from a particle interaction with a detector crystal. The tellurium-130 in the crystals, which is the decaying component in the detector, accounts for about 450 pounds of that weight.

This heightened sensitivity, which enables CUORE to look for signatures of dark matter particles – could possibly help to understand a periodic signal that a dark matter experiment called DAMA/LIBRA, installed at the same Gran Sasso site, has reported.

After CUORE’s 5-year run, a planned next-gen upgrade called CUPID will exchange the tellurium crystals with new crystals that will use a form of molybdenum with light-emitting properties. These crystals can produce both temperature-based and light-based signals that will further extend the sensitivity of the detector’s measurements.

“It is an exciting time for neutrino physics,” said Claudia Tomei, a member of the CUORE Executive Board and a researcher at INFN Roma, “with numerous complementary experiments that will help us better understand the properties of neutrinos.”