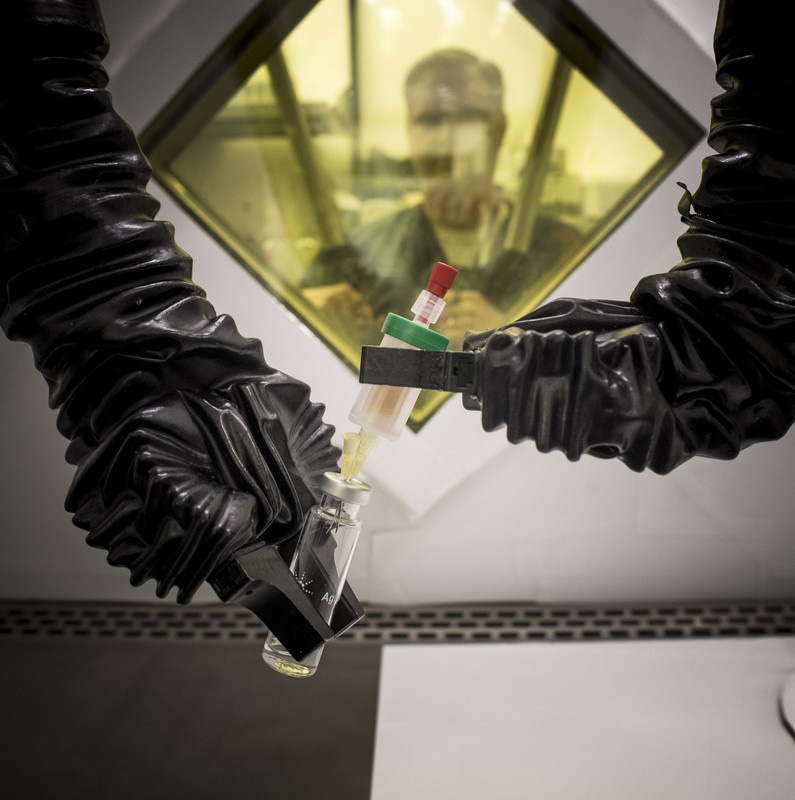 BIRMINGHAM, Ala. – Two radioactive isotopes of the metallic element scandium, or Sc, appear to be ideal for visualizing, and then destroying, solid tumors. A barrier, however, blocks their use — the inability to rapidly produce and purify the isotopes in useful amounts.

The University of Alabama at Birmingham, in conjunction with researchers at the University of Wisconsin and Argonne National Laboratory in Illinois, have received a Department of Energy grant to solve this production roadblock for the radioactive isotopes 43Sc and 47Sc. 43Sc has a half-life of 3.9 hours, so every four hours more than half the radioactivity is lost. It must be used in a PET scan the same day it is made.

43Sc and 47Sc are a sought-after “theranostic” pair, says Suzanne Lapi, Ph.D., director of the UAB Cyclotron Facility, professor in the UAB Department of Radiology and leader on the grant.

The neologism “theranostics” combines the words therapy and diagnostics. Both 43Sc and 47Sc — if available — would be attached to a targeting peptide to guide them to a solid tumor for imaging and for tumor eradication. 43Sc would allow a diagnostic scan because it emits positrons resulting in gamma radiation that would travel out of the body for detection and size measurement by a PET scan. 47Sc would deliver the therapy at the tumor, by emitting a tissue-damaging beta particle.

The Lapi lab at UAB used the UAB cyclotron — a key machine for the development of advanced cancer diagnosis and treatment at the O’Neal Comprehensive Cancer Center at UAB — for preliminary work on how to make the theranostic pair.

They found that protons, fired from the particle accelerator, formed Sc isotopes when using titanium oxide targets. Shaun Loveless, a graduate student in the Lapi lab, also developed a purification scheme — target titanium oxide was dissolved in acid and ammonium bifluoride and poured through an ion exchange column to separate Sc from titanium.

All three labs will work together, at small scales, to perfect the purification of 43Sc and 47Sc from the target materials.

Lapi says UAB’s targeting expertise and its powerful cyclotron helped the university compete for the $390,000 research grant. She also says all three sites will involve graduate students in collaborative training and research, which is a goal of the Department of Energy to prepare the future workforce.

The UAB Cyclotron Facility has national recognition. It produces zirconium-89 and other isotopes for clinicians and researchers at institutions that include Stanford University, the University of California, MD Anderson Center in Houston, the University of Pennsylvania, Yale University and the Memorial Sloan Kettering Cancer Center in New York.

Also, the UAB cyclotron was part of a surprising, nonmedical basic science discovery published in the journal Nature this year. Lapi and Loveless were co-authors with nuclear physicists working at the Lawrence Livermore National Laboratory in California, City University of New York and the University of Missouri to test the ability of a radioactive zirconium-88 isotope — produced and purified at UAB — to capture neutrons.

Zirconium 88’s ability to capture neutrons was 1 million times greater than the theoretically predicted value, a gap called “surprisingly large” in the study’s title. “This is the second-largest thermal neutron capture cross-section ever measured,” the authors wrote. “No other cross-section of comparable size has been discovered in the past 70 years.”

Funding for this isotope production research comes from Department of Energy Isotope Program grant DE-SC0020197. The federal Isotope Program supports development of production techniques for radioactive and stable isotopes that are in short supply for research and have strategic importance to the nation.

In the UAB Department of Radiology, Lapi is also vice chair of Translational Research, director of the Radiochemistry Laboratory and division director of Advanced Medical Imaging Research. She is also a senior scientist in the O’Neal Comprehensive Cancer Center at UAB.