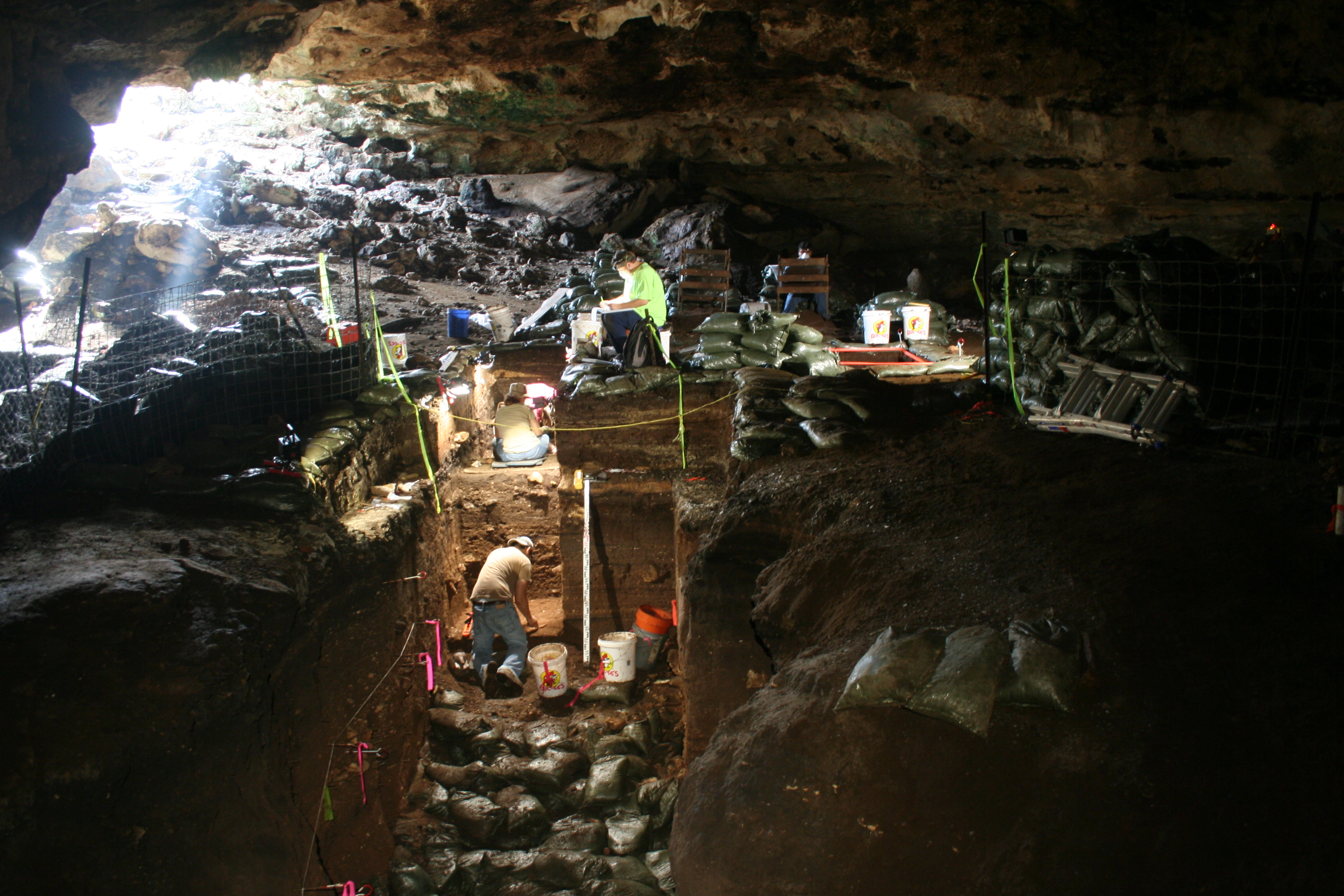 Texas researchers from the University of Houston, Baylor University and Texas A&M University have discovered evidence for why the earth cooled dramatically 13,000 years ago, dropping temperatures by about 3 degrees Centigrade.

The evidence is buried in a Central Texas cave, where horizons of sediment have preserved unique geochemical signatures from ancient volcanic eruptions — signatures previously mistaken for extraterrestrial impacts, researchers say.

The resolution to this case of mistaken identity recently was reported in the journal Science Advances.

“This work shows that the geochemical signature associated with the cooling event is not unique but occurred four times between 9,000 and 15,000 years ago,” said Alan Brandon, Ph.D., professor of geosciences at University of Houston. “Thus, the trigger for this cooling event didn’t come from space. Prior geochemical evidence for a large meteor exploding in the atmosphere instead reflects a period of major volcanic eruptions.”

After a volcano erupts, the global spread of aerosols reflects incoming solar radiation away from Earth and may lead to global cooling post eruption for one to five years, depending on the size and timescales of the eruption.

The study indicates that the episode of cooling, scientifically known as the Younger Dryas, was caused by numerous coincident Earth-based processes, not an extraterrestrial impact.

“The Younger Dryas, which occurred about 13,000 years ago, disrupted distinct warming at the end of the last ice age,” said co-author Steven Forman, Ph.D., professor of geosciences at Baylor University.

The Earth’s climate may have been at a tipping point at the Younger Dryas, possibly from the ice sheet discharge into the North Atlantic Ocean, enhanced snow cover and powerful volcanic eruptions that may have in combination led to intense Northern Hemisphere cooling, Forman said.

“This period of rapid cooling is associated with the extinction of a number of species, including mammoths and mastodons, and coincides with the appearance of early human occupants of the Clovis tradition,” said co-author Michael Waters, Ph.D., director of the Center for the First Americans at Texas A&M University.

University of Houston scientists Brandon and doctoral candidate Nan Sun, lead author, accomplished the isotopic analysis of sediments collected from Hall’s Cave in the Texas Hill Country. The analysis focused on difficult measurements at the parts per trillion on osmium and levels of highly siderophile elements, which include rare elements like iridium, ruthenium, platinum, palladium and rhenium. The researchers determined the elements in the Texas sediments were not present in the correct relative proportions to have been added by a meteor or asteroid that impacted Earth.

That meant the cooling could not have been caused by an extraterrestrial impact. It had to have been something happening on Earth. But what?

“The signature from the osmium isotope analysis and the relative proportion of the elements matched that previously reported in volcanic gases,” Sun said.

Kenneth Befus, Ph.D., volcanologist at Baylor University, added that “these signatures were likely the result of major eruptions across the Northern Hemisphere, including volcanoes in the Aleutians, Cascades and even Europe.”

“I was skeptical. We took every avenue we could to come up with an alternative explanation, or even avoid, this conclusion,” Brandon said. “A volcanic eruption had been considered one possible explanation but was generally dismissed because there was no associated geochemical fingerprint.”

A volcanic cause for the Younger Dryas is a new, exciting idea, he said. Whether a single major eruption of a volcano could drive the cooling observed, however, is still an open question, the researchers said.

Volcanic eruptions cause their most severe cooling near the source, usually in the year of the eruption, with substantially less cooling in the years after the eruption. The Younger Dryas cooling lasted about 1,200 years, so a sole volcanic eruptive cause is an important initiating factor, but other Earth system changes, such as cooling of the oceans and more snow cover were needed to sustain this colder period, Forman said.

This research underscores that extreme climate variability since the last ice age is attributed to unique Earth-bound drivers rather than extraterrestrial mechanisms. Such insights are important guidance for building better models of past and future climate change.

Baylor University is a private Christian University and a nationally ranked research institution. The University provides a vibrant campus community for more than 18,000 students by blending interdisciplinary research with an international reputation for educational excellence and a faculty commitment to teaching and scholarship. Chartered in 1845 by the Republic of Texas through efforts of Baptist pioneers, Baylor is the oldest continually operating University in Texas. Located in Waco, Baylor welcomes students from all 50 states and more than 90 countries to study a broad range of degrees among its 12 nationally recognized academic divisions.

ABOUT THE COLLEGE OF ARTS & SCIENCES AT BAYLOR UNIVERSITY

The College of Arts & Sciences is Baylor University’s largest academic division, consisting of 25 academic departments and eight academic centers and institutes. The more than 5,000 courses taught in the College span topics from art and theatre to religion, philosophy, sociology and the natural sciences. Faculty conduct research around the world, and research on the undergraduate and graduate level is prevalent throughout all disciplines. Visit baylor.edu/artsandsciences.