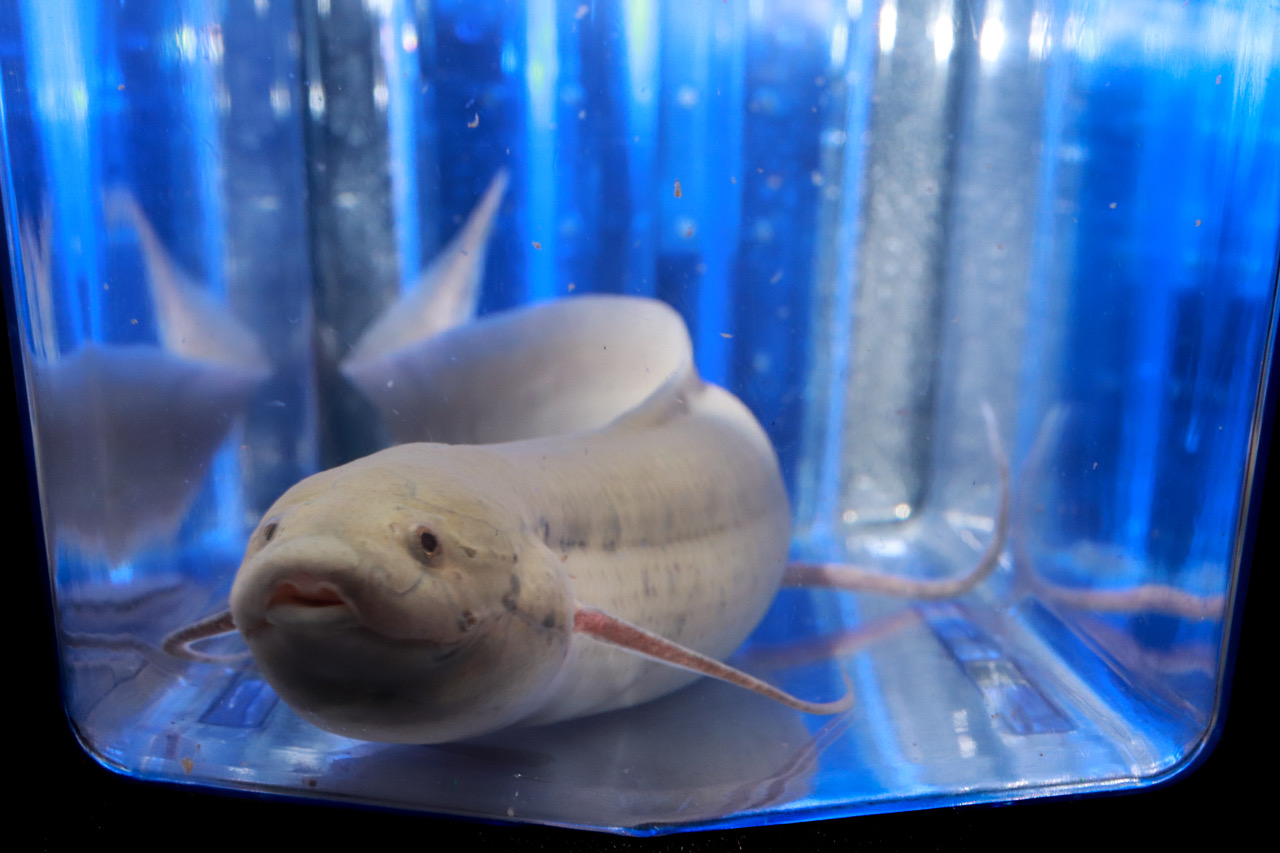 For most vertebrates, losing a limb is permanent, but a lucky few species — such as salamanders and tadpoles — have the ability to completely regrow complex body parts. Understanding the molecular mechanisms underlying this phenomenon may be the key to developing new kinds of regenerative medicine, giving us the power to heal spinal cord injuries and other severely damaged tissues.

A new study published in the Proceedings of the Royal Society B from researchers at the University of Chicago and Universidade Federal do Pará explores this regenerative ability in the tails of West African lungfish for the first time, and finds that the process shares many of the same traits as tail regeneration in salamanders. Their results indicate that this trait was likely found in a common ancestor – and provide a new opportunity for better understanding and harnessing the mechanisms of limb regrowth.

The inspiration for this research grew out of a postdoctoral fellowship in the Shubin Lab at UChicago. After completing his postdoctoral studies in evolutionary biology, Igor Schneider, PhD, accepted a faculty position in Belém, Brazil, where he found the diversity of the Amazon rainforest at his fingertips. He became interested in exploring evolutionary traits in new animal models and ultimately narrowed his focus to regenerative biology. He began exploring mechanisms of regeneration in the lungfish – first in South American species, and then in West African lungfish.

“When we’re talking about how a salamander regrows a lost tail, we’re talking about regrowing all sorts of tissues,” said Schneider, an Associate Professor of Biological Sciences at the Universidade Federal do Pará and a Visiting Associate Professor of Organismal Biology at UChicago. “Vertebrae, spinal cord, muscle, it’s a very complex structure. Mammals, birds and most reptiles can’t regenerate tissue like that, but salamanders can. We know some of the biology of how that happens, but we don’t really know much about how it evolved, or when. Did our ancestors have the ability to regenerate a lost limb? Did we lose this capacity as mammals, or did salamanders get lucky enough to invent it later on?”

One way to answer this question is to determine whether or not the trait existed in the common ancestor between humans and salamanders. To do this, the researchers took a phylogenetic approach, looking for additional relatives that possess a similar regenerative trait. Lungfish are unique in that they are “our closest fish cousin,” Schneider said. “They can regenerate their tails, but they are also our closest relative in the water. This lets us explore whether or not this regenerative ability was also likely to be present in our common ancestor, without having to go too deep into our phylogenetic tree.”

Lungfish represent an ideal model for more reasons than one. “These animals have the right anatomy to study this question and can also be easily managed in the lab,” said Neil Shubin, PhD, the Robert R. Bensley Distinguished Service Professor of Organismal Biology and Anatomy at UChicago. “Lungfish are much more closely related to humans than other common species that have regenerative abilities, like zebrafish. For instance, lungfish have a humerus in their fin, just like the bone in our upper arms. They have lungs that are similar to ours. There is a suite of characteristics suggesting that these animals are much more closely related to us than zebrafish.”

The investigators were initially challenged with establishing the lungfish as a model from the ground up, learning how to care for the fish in a laboratory setting, sampling tissue and obtaining DNA sequencing data to get a clearer picture of the animal’s genetics, and testing new antibodies and techniques in a brand-new species.

What they found was that the West African lungfish could not only fully regenerate a lost tail, but that the regeneration used similar molecular mechanisms to the limb regrowth seen in amphibians. This includes a critical signaling molecule, Shh, which plays a key role in the growth and organization of the brain and body during embryonic development. This provides support for the hypothesis that this type of regeneration was present in a common ancestor of these species — and of humans.

But perhaps even more interesting than the similarities in regeneration processes are the differences. “What I found particularly intriguing were some of the aspects of tail regrowth that are unique to the lungfish,” said Schneider. “These animals are known for having gigantic genomes — up to 40 times as large as a human’s — because their genomes contain a lot of virus-derived DNA elements, called transposons. During regeneration, some of those genes turn on, but we don’t know if it’s just because they’re close to other key genes in this process, or if it’s because these genes are actively involved in regeneration. Some of this has been seen in amphibian regeneration as well, so it begs the question of whether or not these transposons play a particular role in regeneration.”

In addition to providing insights on the evolutionary origin of this trait, the researchers say this new animal model will help further the field of regenerative medicine. “Often, when you have limited models, you’ll try to understand a process very well in a given species, and then extrapolate what you learn to other species,” Schneider said. “But you might encounter things that are unique to the species you’re studying that won’t always apply to other animals. Understanding phenomena like regeneration in a comparative way, looking at how other organisms are doing this, can help us find general themes in regeneration.”

Further clarifying the evolution of limb regeneration in lungfish and other species, along with their underlying mechanisms, may uncover new treatments for severe wounds, spinal cord injuries and amputations. “Ultimately, we’re trying to understand the ancestral tool kit used by these species to conduct the regeneration process,” said Shubin. “This will help us figure out what parts of that tool kit we as humans have lost, at the genetic and cellular level, and more importantly, what parts can we recreate?”

About the University of Chicago Medicine & Biological Sciences

The University of Chicago Medicine, with a history dating back to 1927, is one of the nation’s leading academic health systems. It unites the missions of the University of Chicago Medical Center, Pritzker School of Medicine and the Biological Sciences Division. Twelve Nobel Prize winners in physiology or medicine have been affiliated with the University of Chicago Medicine. Its main Hyde Park campus is home to the Center for Care and Discovery, Bernard Mitchell Hospital, Comer Children’s Hospital and the Duchossois Center for Advanced Medicine. It also has ambulatory facilities in Orland Park, South Loop and River East as well as affiliations and partnerships that create a regional network of care. UChicago Medicine offers a full range of specialty-care services for adults and children through more than 40 institutes and centers including an NCI-designated Comprehensive Cancer Center. Together with Harvey-based Ingalls Memorial, UChicago Medicine has 1,296 licensed beds, nearly 1,300 attending physicians, over 2,800 nurses and about 970 residents and fellows.