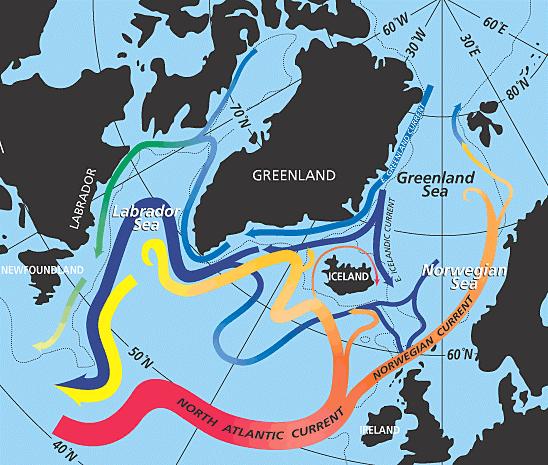 “We have found a new trigger to explain the start-up of the Atlantic current system during the greenhouse-icehouse climate transition: During the warm climate, buoyant fresh water flooded out of the Arctic and prevented the ocean-sinking that helps power the conveyor. We found that the Arctic-Atlantic gateway closed due to tectonic forces, causing a dramatic increase in North Atlantic salinity. This caused warming of the North Atlantic and Europe, and kickstarted the modern circulation that keeps Europe warm today,” says David Hutchinson, researcher at the Department of Geological Sciences, Stockholm University, and lead author of the article published in

The team of scientists, from the Bolin Centre for Climate Research, used a combination of geophysical data and climate modelling to show that the freshwater transport through the Arctic-Atlantic gateway plays a critical role in controlling the overturning circulation.

“Not only did deep water start forming in the Atlantic Ocean, it also stopped forming in the North Pacific at the same time, which matches geological evidence. We were surprised to find that our computer simulations can explain both of these changes due to salty ocean currents connecting the Pacific to the Atlantic. Our study is the first to show that these two events are linked, which is very exciting,” says Hutchinson.

The climate at this time was very warm, with atmospheric CO2 levels two to three times the present day levels, and this contributed to extremely fresh Arctic waters. The study begs the question of whether in a future warm world, in which the Arctic may again be very fresh, the sinking in the Atlantic may cease again, which may dramatically alter the climate of Europe. Without the Atlantic conveyor belt, Europe can experience both colder winters and hotter and drier summers, making a more extreme and inhospitable climate.

“Our study helps to bridge the gap between climate modelling and geological observations of the deep past. We hope this will inspire further research from both communities on the deep circulation of the ocean,” says Hutchinson.

This part of information is sourced from https://www.eurekalert.org/pub_releases/2019-08/su-sot082119.php