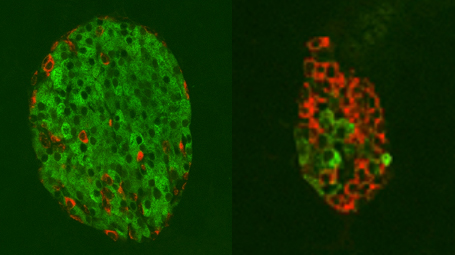 Blocking cell receptors for glucagon, the counter-hormone to insulin, cured mouse models of diabetes by converting glucagon-producing cells into insulin producers instead, a team led by UT Southwestern reports in a new study. The findings, published online in PNAS, could offer a new way to treat both Type 1 and Type 2 diabetes in people.

More than 34 million Americans have diabetes, a disease characterized by a loss of beta cells in the pancreas. Beta cells produce insulin, a hormone necessary for cells to absorb and use glucose, a type of sugar that circulates in the blood and serves as cellular fuel.

In Type 2 diabetes, the body’s tissues develop insulin resistance, prompting beta cells to die from exhaustion from secreting excess insulin to allow cells to take in glucose. In Type 1 diabetes, which affects about 10 percent of the diabetic population, beta cells die from an autoimmune attack. Both kinds of diabetes lead to severely elevated blood sugar levels that eventually cause a host of possible complications, including loss of limbs and eyesight, kidney damage, diabetic coma, and death.

Most treatments for diabetes focus on insulin, but its counterpart – the hormone glucagon that is produced by alpha cells in the pancreas – has received comparatively little attention, says study leader May-Yun Wang, Ph.D., assistant professor of internal medicine at UTSW. Glucagon binds to receptors on cells in the liver, prompting this organ to secrete glucose. Some recent studies have suggested that depleting glucagon or blocking its receptor can help research animals or humans with diabetes better manage their glucose levels. But how this phenomenon occurs has been unknown.

To answer this question, Wang and her colleagues, including William L. Holland, Ph.D., a former assistant professor of internal medicine at UTSW who is now at the University of Utah, and Philipp E. Scherer, Ph.D., professor of internal medicine and cell biology at UTSW and director of UTSW’s Touchstone Center for Diabetes Research, used monoclonal antibodies – manmade proteins that act like human antibodies and help the immune system identify and neutralize whatever they bind to – against the glucagon receptor in mouse models of diabetes.

In one model, called PANIC-ATTAC (pancreatic islet beta-cell apoptosis through targeted activation of caspase 8), a genetic mutation causes beta cells to selectively die off when these mice receive a chemical treatment. Once these animals’ beta cells were depleted, the researchers administered monoclonal antibodies against the glucagon receptor. Weekly treatment with the antibodies substantially lowered the rodents’ blood sugar, an effect that continued even weeks after the treatments stopped.

Further investigation showed that the number of cells in the pancreas of these animals significantly increased, including beta cells. Searching for the source of this effect, the researchers used a technique called lineage tracing to label their alpha cells. When they followed these alpha cells through rounds of cell divisions, they found that treatment with monoclonal antibodies pushed some of the glucagon-producing alpha cell population to convert into insulin-producing beta cells.

Although the PANIC-ATTAC model shares the same beta cell loss that occurs in both Type 1 and Type 2 diabetes, it’s missing the autoimmune attack that spurs Type 1 diabetes. To see if beta cells could rebound through alpha cell conversion under these circumstances, the researchers worked with a different mouse model called nonobese diabetic (NOD) mice in which their beta cells become depleted through an autoimmune reaction. When these animals were dosed with monoclonal antibodies, beta cells returned, despite active immune cells.

In a third animal model that more closely mimics a human system, the researchers injected human alpha and beta cells into immunodeficient NOD mice – just enough cells to produce sufficient insulin to make the animals borderline diabetic. When these mice received monoclonal antibodies against the glucagon receptor, their human beta cells increased in number, protecting them against diabetes, suggesting this treatment could do the same for people.

Being able to produce native insulin, adds Wang, could hold significant advantages over the insulin injections and pumps used by both Type 1 and Type 2 diabetics. Eventually, she says, similar monoclonal antibodies could be tested in diabetics in clinical trials.

“Even though Type 1 and Type 2 diabetics try their very best to keep glucose under control, it fluctuates quite massively throughout the day even with the best state-of-the-art pump,” Wang says. “Giving them back their own beta cells could help restore much better natural regulation, greatly improving glucose regulation and quality of life.”

UT Southwestern, one of the premier academic medical centers in the nation, integrates pioneering biomedical research with exceptional clinical care and education. The institution’s faculty has received six Nobel Prizes, and includes 23 members of the National Academy of Sciences, 17 members of the National Academy of Medicine, and 13 Howard Hughes Medical Institute Investigators. The full-time faculty of more than 2,500 is responsible for groundbreaking medical advances and is committed to translating science-driven research quickly to new clinical treatments. UT Southwestern physicians provide care in about 80 specialties to more than 105,000 hospitalized patients, nearly 370,000 emergency room cases, and oversee approximately 3 million outpatient visits a year.