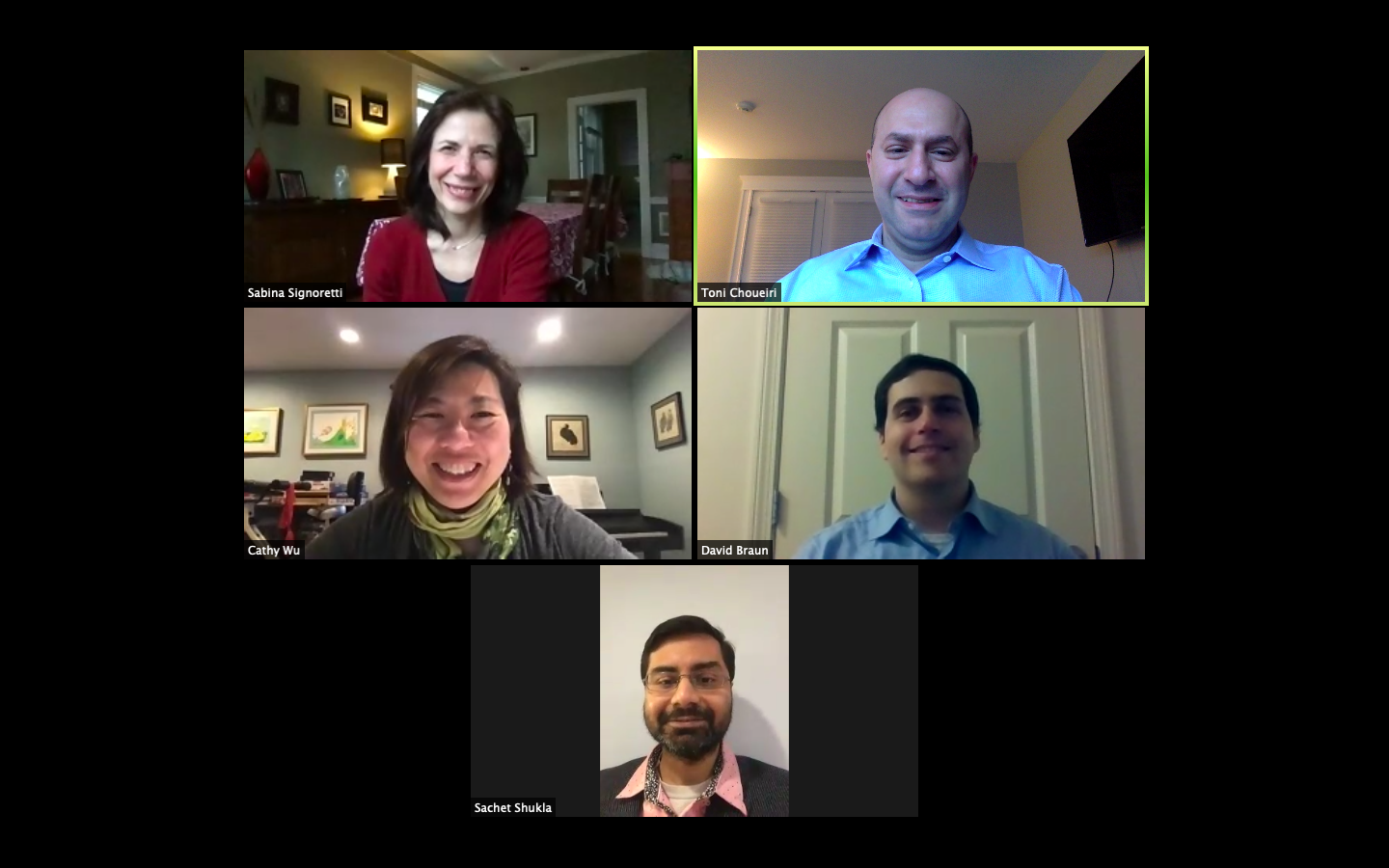 The research was presented during the Clinical Science Symposium at the American Society of Clinical Oncology (ASCO) Annual Meeting and published simultaneously in Nature Medicine. The researchers say the study provides important clues about kidney cancer genetics and its interaction with the immune system that may prove to be vital in our ability to predict which patients are likely to benefit from immunotherapy drugs, which have been approved for first- and second-line treatment in the disease, but which don’t work in all patients. The study showed that features that are typically linked to immunotherapy response or resistance in other types of cancer don’t work the same way in advanced clear cell renal cell cancer (ccRCC).

“Kidney cancer breaks all those rules,” said David Braun, MD, PhD, a Dana-Farber kidney cancer specialist and first author of the report. Co-senior authors are Toni Choueiri, MD, Catherine J. Wu, MD, Sachet A. Shukla, PhD, and Sabina Signoretti, MD all of Dana-Farber. Other authors are from the Broad Institute of MIT and Harvard, Bristol Myers Squibb, and Brigham and Women’s Hospital.

Clear cell renal cell cancer is the most common form of kidney cancer. There are about 74,000 new cases of kidney cancer in the United States each year, and about 15,000 deaths.  Checkpoint inhibitor immunotherapy drugs such as pembrolizumab (Keytruda) and nivolumab (Opdivo) used in advanced kidney cancer work by blocking PD-1, a protein on immune T cells that normally keep these cells from attacking other cells in the body. By blocking PD-1, these drugs boost the immune response against kidney cancer cells.

PD-1 checkpoint inhibitors have brought a powerful new weapon to bear on advanced kidney cancer, which generally doesn’t respond to standard chemotherapy. In cancers such as melanoma and lung cancer, checkpoint inhibitors – drugs like pembrolizumab (Keytruda) and nivolumab (Opdivo) – tend to be more effective against tumors with a “high mutational burden,” that is, their DNA is riddled with many mutations. Advanced clear cell renal cell cancer, by contrast, has a moderate number of mutations yet is relatively responsive to checkpoint inhibitors – and scientists don’t know why that is. Another puzzling difference is that in melanoma and some other cancers, tumors that are infiltrated with large numbers of immune CD8 T cells, creating what’s termed an inflamed or “hot” environment within the tumor, respond better to PD-1 blockade. But the reverse is true in advanced kidney cancer – high infiltration by CD8 T cells is associated with a worse outcome.

In this study, the scientists analyzed 592 tumors collected from patients with advanced kidney cancer who were enrolled in clinical trials of PD-1 blocking drugs. They used whole-exome and RNA sequencing and other methods to uncover the genomic changes and other factors that were associated with how the patients’ tumors responded to the drugs – specifically, the patients’ progression-free survival and overall survival.

The study was aimed at determining what features of advanced kidney cancer cells were associated with their response or resistance to PD-1 inhibitors. In analyzing the tumors from advanced ccRCC patients treated with PD-1 inhibitors, the investigators looked for biomarkers – genetic changes, mutations, copy number alterations, and so forth – in the genomes of the kidney cancer cells that might be correlated with patient outcomes – such as progression-free survival and overall survival.

Braun said that some of the most interesting findings were characteristics of the kidney tumors that – unlike with other types of cancer – did not influence responsiveness to PD-1 inhibitor drugs. For example, tumors containing a large number of neoantigens – proteins made by cancer-related DNA mutations that may make the tumors more responsive to immunotherapy, but this proved not to be true of the kidney tumors. Also, even though the kidney tumors were heavily infiltrated by CD8 immune T cells – which causes other kinds of cancer to provoke a strong immune attack against the tumors – this actually led to no difference in outcome for these kidney cancer patients. “To our surprise, the immunologically ‘hot’ tumors did not respond any better than the ‘cold’ tumors,” said Braun.

Another factor that affects responsiveness in some types of cancer – the specific HLA molecules inherited by individuals that present antigens to the immune system – didn’t affect the immune response to advanced kidney tumors. “That surprised us,” said Dr. Wu, chief of Division of Stem Cell Transplantation and Cellular Therapies. “We reasonably hypothesized that the potential of the patient’s immune system to present and react to a greater diversity of antigens may be associated with better outcomes, but clearly kidney cancer does not fit the standard mold,” noted Wu.

“However, we did uncover some factors that may explain the unexpected observations,” said Dr. Shukla who leads the computational group at the Dana-Farber Translational Immunogenomics Laboratory. The study uncovered that advanced kidney tumors heavily infiltrated with CD8 T cells did not respond well to immune checkpoint blockers even though they were immunologically “hot” tumors. The scientists, with their comprehensive analysis of changes in the kidney tumors’ genomes,  found that the tumors were depleted of mutated PBRM1 genes – which are correlated with improved survival with PD-1 blockade therapy – and also had an abundance of deletions of a chromosomal segment known as 9p21.3, which is associated with worse outcomes with PD-1 blockade. “We believe that these two factors may explain why CD8 T cell infiltration of the tumors did not make them responsive to checkpoint blocker therapy,” explained Shukla, “while other types of cancer that exhibited CD8 T cell infiltration but did not have those chromosomal changes did respond.”

“Our work highlights the importance of integrating genomic data with immunopathologic data generated through painstaking review by expert pathologists,” said Dr. Signoretti, professor of pathology at Harvard Medical School. “Our findings reveal that interactions between immune T cell infiltration and alterations in the tumor DNA (such as inactivation of the PBRM1 gene and the abundance of 9p21.3 deletions) can be important influences on tumors’ response to PD-1 blockade – perhaps not only in kidney cancer but in other types of tumors as well.”

“The current study provides critical insights into immunogenomic mechanisms contributing to response and resistance to immunotherapy in clear cell renal cell cancer,” said Dr. Choueiri, director of the Lank Center for Genitourinary Oncology and the Jerome and Nancy Kohlberg Professor of Medicine at Harvard Medical School.  “The detailed clinical, genomic, transcriptomic, and immunopathology data produced by this study will serve as a valuable resource for the cancer immunology community. This work, therefore, will be important for ongoing research in precision medicine and immuno-oncology, helping to identify which patients are likely to respond to current therapies, and providing fundamental information to aid in development of rational combination therapies to overcome resistance in the future.”

“One notable thing,” said Choueiri, “is the collaboration between multiple disciplines and stakeholders: Immunology, pathology, genetics, computational and clinical expertise all converged on one tumor, while involving academic and industry stakeholders.”

This study is being presented in the ASCO 2020 Virtual Scientific Program, held May 29-May 31:

Updates on Immunotherapy Biomarkers Development in Kidney and Bladder Cancers

Dana-Farber Cancer Institute is one of the world’s leading centers of cancer research and treatment. It is ranked in the top 5 of U.S. News and World Report’s Best Hospitals for both adult and pediatric cancer care. Dana-Farber’s mission is to reduce the burden of cancer through scientific inquiry, clinical care, education, community engagement, and advocacy.  We provide the latest in cancer for adults through Dana-Farber/Brigham and Women’s Cancer Care and for children through Dana-Farber/Boston Children’s Cancer and Blood Disorders Center. Dana-Farber is dedicated to a unique and equal balance between cancer research and care, translating the results of discovery into new treatments for patients locally and around the world.

A Distinctive Inflammatory Signature Found in a Genetic Form of ALS

What factors put Philippine birds at risk of extinction?