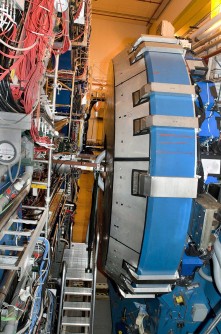 The “proton spin puzzle” concerns how much the building blocks of the proton, quarks and gluons, and their motion within protons each contribute to a proton’s overall spin. Using STAR’s “forward” detectors provides the first measurements of how the spins of gluons (and quarks) with lower momentum contribute to spin. Momentum measures the motion of a moving body, defined as a product of its mass and velocity. Though carrying a small fraction of the proton’s momentum, these “wimpy” gluons are abundant, which could add up to a large contribution to spin. So far, the results match those predictions.

Knowing how spin arises from the quarks and gluons will help nuclear physicists understand how these building blocks give rise to all visible matter. Scientists once thought quarks were the main contributors to spin. RHIC is the first collider to measure gluon polarization—how an individual gluon’s spin aligns with the spin of its parent proton—and how much gluon spin contributes to proton spin. If each “wimpy” gluon carries just a bit of spin, together they could have a big impact. The new data provides the first-ever glimpse into this low-momentum (wimpy) range and gives a more detailed picture of how the gluon spin contribution changes depending on the momentum of these particles.

Nuclear physicists used the Solenoidal Tracker at RHIC (STAR) detector, essentially a giant 3D digital camera, to capture the subatomic debris of particle smashups at the Relativistic Heavy Ion Collider (RHIC). These results come from experiments in which RHIC collided beams of polarized protons—where proton spins are aligned in a controlled way. Specifically, STAR physicists compared collisions where the spins in both beams of protons were aligned or anti-aligned with their direction of motion to collisions where only one beam’s spin was flipped relative to its direction. Using detector components positioned close to the beam line, they looked for differences arising from the two collision conditions. These “forward” detectors are particularly sensitive to collisions where an energetic quark or gluon in one beam collides with a wimpy gluon in the other beam, pushing the resulting particle jets forward like a semitruck would push the debris of a small car it collided with head-on. If the wimpy gluons within the proton were randomly arrayed, there should be no difference in particle jet production with the switch in proton spin direction. But if the wimpy gluons were 100% spin-aligned, there would be a big difference. Scientists will need to collect more data to say for sure, but so far, these first measurements of wimpy gluons’ spin alignments agree with theoretical predictions that they align to some extent with the overall spin. These predictions are derived by extrapolating from measurements of more energetic gluons, so they are currently just a best guess. The new data will help refine the theories used to make these predictions. The measurements will also pave the way for using even more precise forward detectors planned for installation at STAR to provide a more definitive answer about the size of the wimpy gluons’ contribution.

This work was funded primarily by the Department of Energy’s (DOE’s) Office of Science, Office of Nuclear Physics, and by the agencies and organizations supporting STAR listed here. Researchers used resources at the Relativistic Heavy Ion Collider and the National Energy Research Scientific Computing Center, both DOE Office of Science scientific user facilities.