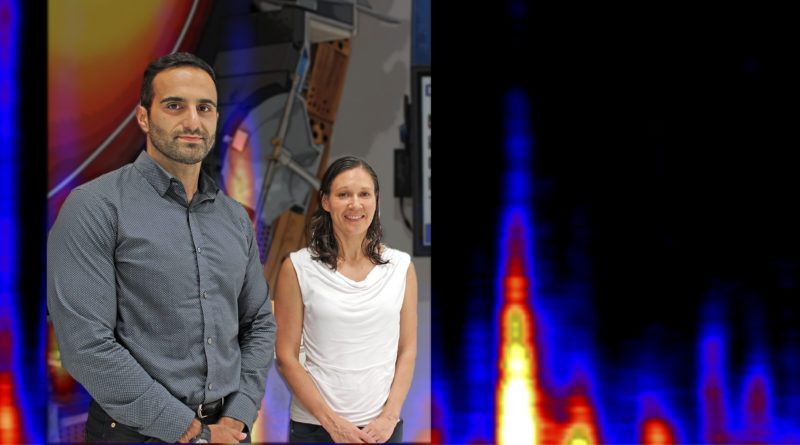 Turbulence, the swirling eddies and currents that jostle fluids and air, is traditionally seen as disruptive of efforts to capture and control on Earth the fusion energy that powers the sun and stars. Now a discovery by scientists at the U.S. Department of Energy’s (DOE) Princeton Plasma Physics Laboratory (PPPL) and General Atomics has found that enhanced turbulence in the edge of the plasma may actually improve the thermal insulation required to achieve fusion energy.

The surprise finding on the DIII-D national fusion facility operated by General Atomics for the DOE, could lead to improved performance of future tokamaks — magnetic fusion facilities such as ITER, which is under construction in France to demonstrate the practicality of fusion energy. “The plasma edge plays a critical role in providing an insulating layer that allows fusion reactions to take place in the plasma core,” said PPPL physicist Raffi Nazikian, a coauthor of the study reported in Physical Review Letters.  “In high-power experiments we found that the normally quiet edge of the plasma became strongly turbulent, causing the edge to take on a staircase shape and the core temperature to increase, which was very surprising,” said Nazikian, who discovered the plasma staircase.

Fusion, the power that drives the sun and stars, is the fusing of light elements in the form of plasma — the hot, charged state of matter composed of free electrons and atomic nuclei — that releases massive amounts of energy. Scientists around the world are seeking to replicate fusion on Earth for a virtually inexhaustible supply of power to generate electricity.

Researchers used powerful supercomputer simulations to reveal the mechanism for the enhanced turbulence that leads to staircase formation at the edge of the plasma, said PPPL physicist Arash Ashourvan, lead author of the report who discovered the mechanism behind the staircase formation.  “Our research shows that as the insulating layer gets wider at the plasma edge, enhanced turbulence should occur more often,” Ashourvan said. “This turbulence will occur in zones, producing a staircase in the edge profile.”

Researchers performed the simulations using an advanced turbulence code developed by General Atomics coauthors and physicists Jeff Candy and Emily Belli to address “new challenges posed by the tokamak edge region. It turns out to be very challenging to simulate plasma turbulence in the extreme edge of the plasma where there are very steep temperature gradients,” said Belli.

The discovery, built on DIII-D experiments, “was really serendipitous,” said PPPL physicist Brian Grierson, a coauthor of the paper. “The earlier work by Nazikian showed an unusual staircase structure in the edge, and relatively quickly Arash was able to use his theoretical understanding and advanced simulation tools to develop a detailed understanding.”

“The DIII-D tokamak has an extensive diagnostic set to measure plasma behavior,” said physicist Richard Buttery of General Atomics, head of experimental sciences for the DIII-D program.  “We depend on collaborators from around the U.S. to provide outstanding instruments for measuring the plasma and making new discoveries.” Support for this work comes from the DOE Office of Science.

About the DIII-D National Fusion Facility. DIII-D is the largest magnetic fusion research facility in the U.S. and has been the site of numerous pioneering contributions to the development of fusion energy science. DIII-D continues the drive toward practical fusion energy with critical research conducted in collaboration with more than 600 scientists representing over 100 institutions worldwide. For more information, visit www.ga.com/diii-d.

PPPL, on Princeton University’s Forrestal Campus in Plainsboro, N.J., is devoted to creating new knowledge about the physics of plasmas — ultra-hot, charged gases — and to developing practical solutions for the creation of fusion energy. The Laboratory is managed by the University for the U.S. Department of Energy’s Office of Science, which  is the single largest supporter of basic research in the physical sciences in the United States and is working to address some of the most pressing challenges of our time. For more information, visit energy.gov/science.