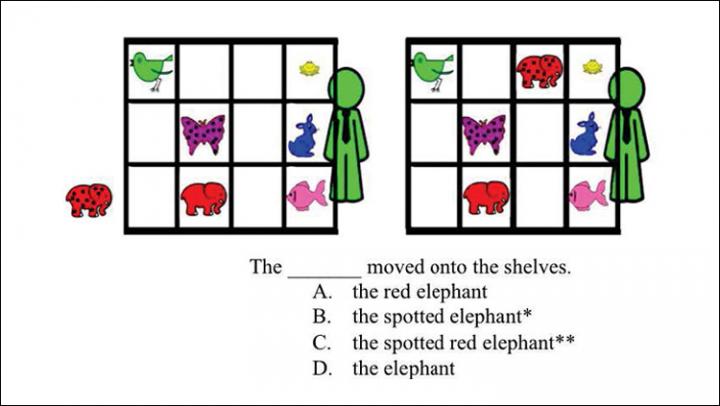 Impairments in social and executive brain functions hinder effective communication, according to research in patients with dementia recently published in

Meghan Healey and colleagues at the University of Pennsylvania showed patients with dementia and healthy participants illustrations of an object near and then on a bookshelf. The participants chose descriptive words from a multiple-choice list in order to communicate which object moved to an imaginary partner, who was said to be colorblind in some rounds.

The patients selected descriptions that were either overdetailed or too vague more often than the healthy participants, even though they had comparable scores on simple language tests. The healthy participants performed best with a colorblind partner, since they knew to avoid color descriptors and chose other adjectives. The patients, on the other hand, were not sensitive to the needs of their conversational partner. These findings demonstrate that social and executive functions must be integrated during language processing for successful communication.

for full-text PDF and to join SfN’s journals media list.

, the Society for Neuroscience’s open-access journal launched in 2014, publishes rigorous neuroscience research with double-blind peer review that masks the identity of both the authors and reviewers, minimizing the potential for implicit biases.

is distinguished by a broader scope and balanced perspective achieved by publishing negative results, failure to replicate or replication studies. New research, computational neuroscience, theories and methods are also published.

About The Society for Neuroscience

The Society for Neuroscience is the world’s largest organization of scientists and physicians devoted to understanding the brain and nervous system. The nonprofit organization, founded in 1969, now has nearly 37,000 members in more than 90 countries and over 130 chapters worldwide.

This part of information is sourced from https://www.eurekalert.org/pub_releases/2019-08/sfn-seb082019.php