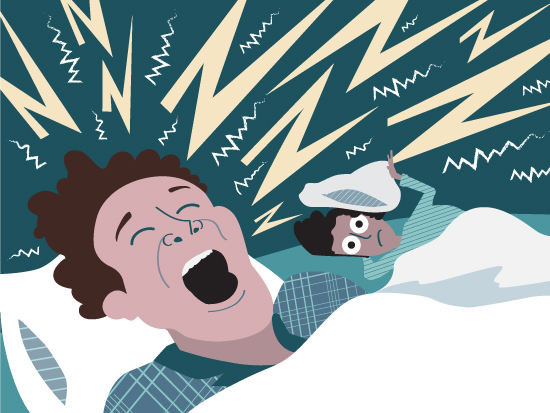 BIRMINGHAM, Ala. – Snoring, the nocturnal malady that is the bane of countless marriages, affects nearly 40 percent of adult men and 24 percent of adult women. In addition to affecting others who are trying to sleep, snoring can be a symptom of a more serious sleep disorder such as obstructive sleep apnea.

Snoring is the result of tissue vibration as air flows through the convolutions and constrictions that make up the human airway. This happens during sleep due to the relaxation of the muscles that support the airway.

“Consider the awake state to be like a fully inflated balloon,” said University of Alabama at Birmingham Associate Professor Kirk P. Withrow, M.D. “The sides of the balloon are far apart, with no danger of coming into contact. As a person goes deeper into sleep, it’s like the air is being let out of the balloon, bringing the sides closer and closer together.”

Once this collapse reaches a certain point — one that is different for every person — things start to get noisy.

Withrow, a UAB otolaryngologist, says that, besides the bulldog, humans are the only animals that suffer from this habit.

“Can you please stop?”

Because every person has a different circumstance, Withrow says, causes of snoring can be difficult to determine and often warrant an evaluation by a knowledgeable medical professional.

“In most cases, snoring arises from structures in the upper portion of the throat, including the uvula, soft palate and tonsils,” he said. “Less commonly, the tongue and epiglottis can be at fault.”

While the nose generally is not the direct source of the tissue vibration, nasal obstruction — like that from congestion due to cold or allergy — can play a role in snoring. This contributes to snoring due primarily to the change in position of the structures in the throat that occurs with mouth breathing, namely the displacement of the tissue toward the back wall of the throat.

“Alleviating nasal obstruction and transitioning away from mouth breathing can improve or eliminate snoring,” Withrow said. “Such treatment can include allergy management or surgery to correct structural defects in the nose.”

Withrow adds that, because of gravity, snoring is typically found to be worse when sleeping on the back. Various devices and techniques aimed at keeping a person off of their back can be beneficial in this situation.

“In some cases, it can be as simple as sewing a tennis ball in a shirt pocket and wearing it backward to sleep,” he said.

Alcohol and other sedating medications lead to increased muscle relaxation during sleep and subsequently increased snoring.

“The importance of body weight as it relates to snoring cannot be overstated,” Withrow said. “Cadaver studies have shown that fat deposition in the tongue and sidewalls of the throat directly correlates to overall body weight. As such, weight loss is often an important part of the treatment of snoring and obstructive sleep apnea.”

Withrow says that, if the problem is purely snoring without apneic episodes — pauses in breathing, there is some evidence that snoring can contribute to more significant issues like atherosclerosis of the carotid arteries in the neck.

“This is more likely a concern if the snorer suffers from other issues such as obesity, high cholesterol or tobacco abuse,” he said. “Studies have linked primary snoring to increased incidence of daytime sleepiness as well as mood disorders such as depression and anxiety. Snoring in older men has been shown to be associated with diminished sexual satisfaction, a problem noted to worsen as the volume of the snoring increases.”

Known for its innovative and interdisciplinary approach to education at both the graduate and undergraduate levels, the University of Alabama at Birmingham is an internationally renowned research university and academic medical center, as well as Alabama’s largest employer, with some 23,000 employees, and has an annual economic impact exceeding $7 billion on the state. The five pillars of UAB’s mission include education, research, patient care, community service and economic development. UAB is a two-time recipient of the prestigious Center for Translational Science Award. Learn more at www.uab.edu. UAB: Powered by will.