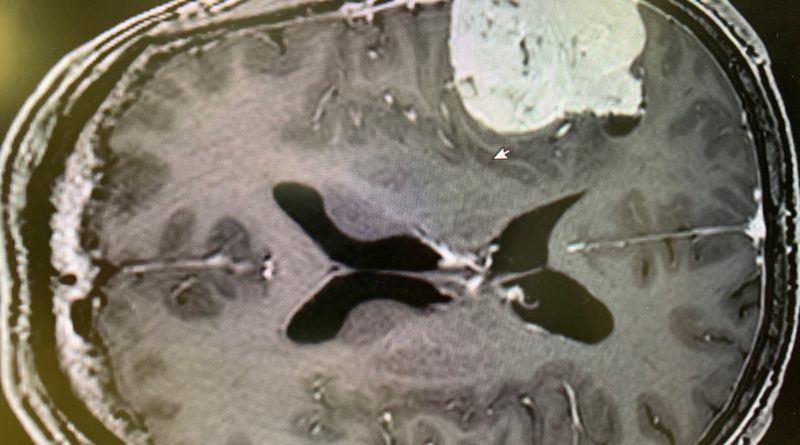 Gary Colon suddenly had trouble speaking. He kept repeating the numbers “0-1-4” and the name “Becky”. While the numbers didn’t mean anything at the time, Becky is Gary’s younger sister. Becky always looks out for her big brother. So when Gary learned he would need a complex surgery to remove a large brain tumor — which was causing his speech problems — Becky sprang into action to make sure he got the best care possible. Gary traveled from Florida to Connecticut to be with his sister and have brain surgery at Norwalk Hospital.

Losing the ability to speak

Every other Monday morning, Gary and his girlfriend, Susan, go on a date: they donate platelets (red blood cells) for cancer patients, and then they go out to breakfast. On one of these Mondays, Gary felt odd after donating platelets. At the restaurant, he couldn’t order breakfast. He attested this lapse in speech to being famished, and his hemoglobin (a protein in red blood cells that carries oxygen throughout the body) being lower than normal after donating platelets. He ordered breakfast by pointing to what he wanted on the menu, and went home thinking he was better after having eaten. Susan thought otherwise. She began to worry when Gary couldn’t have a normal conversation with her.

“I didn’t want to go to the emergency department, even though Susan wanted me to,” said Gary. “I’ve been really healthy my entire life — I eat organic, I exercise, and I’m the same weight as I was when I was in college — so I didn’t think anything was truly wrong with me.”

Susan videoed Gary so he could see that he acting abnormally. Gary watched the video and saw that at times, he couldn’t say his name, or the names of his dog, Hopper, or cats, Miss Pretty Kitty and Willa. Gary called Becky for help.

“When Gary called me, he was talking funny, which was unusual because he’s usually very articulate. I could tell by his voice that he was nervous. I asked him to send me the video immediately,” said Becky, a radiology patient access manager at Norwalk Hospital.

After Becky watched the video, she began to worry that Gary had a serious medical problem. She understood Gary’s hesitation to find out what was going on with him, but she urged him to go to the emergency department.

“Don’t make me come to Florida to bring you to the hospital,” Becky, who lives in Stratford, Connecticut, had said to Gary at the time.

Gary went to the emergency department (ED) at a hospital near his home in Miami, Florida. His ED physician suspected he had a neurological condition based on his symptoms. Gary had a CT scan of his head, which showed a large tumor that was squishing his brain.

“I freaked out for the first time after I saw the CT scan. The tumor was big. It was on the left side of my head and it was clearly pushing my brain to the right,” said Gary. “I thought, ‘I’ve been fine for 50 years, now I’m 51, and all of a sudden I have a brain tumor?’”

Gary then had an MRI, which showed that the tumor was thankfully not cancerous. Gary was diagnosed with a meningioma, a slow-growing benign brain tumor. Meningiomas form on the membranes that cover the brain just inside the skull. Meningiomas grow from outside of the brain and then push into brain. They continue growing once they break into brain. Symptoms vary depending on the location of the tumor. In Gary’s case, the tumor was indenting and injuring the speech area of his brain.

Gary’s mom also had a meningioma. She had brain surgery in the 1970s to remove it.

“I had been waiting by the phone all day to hear from Gary. When I finally heard from him, he texted, ‘I have what mom had.’ I called him right away,” said Becky. “He put me on speaker phone when the ED physician was going over his diagnosis. A neurosurgeon would need to confirm the treatment plan, but we knew Gary most likely would need brain surgery.”

“I started to realize that I wasn’t mentally right, and that the doctors should speak with Becky. I also knew the one person that would know what to do and take care of me was Becky,” said Gary.

While on speaker phone, Becky was already making plans to bring Gary to Norwalk Hospital. She has power of attorney, so she was able to request his medical records from the hospital in Florida.

“Even before the consultation with the neurosurgeon in Florida, I started the process to bring Gary home for surgery. I knew he would get the best care at Norwalk Hospital,” said Becky. “I’ve worked at Norwalk Hospital in the radiology department for 17 years — we’re a family. So I reached out to my network of radiologists to find a neurosurgeon, and they all recommended Dr. Sanderson. I also knew Dr. Sanderson well and trusted him to help my brother.”

Within one day, Becky had obtained Gary’s medical records, consulted with Dr. Sanderson, and finalized all of the arrangements for Gary to have brain surgery at Norwalk Hospital.

Gary left the hospital in Florida with anti-seizure medication and steroids to reduce brain swelling, which is a standard treatment for meningiomas. It was not safe for Gary to fly due to the brain swelling. Becky and their sister, Danielle, made plans to drive Gary from Florida to Connecticut. However, when Gary’s friend learned about his situation, he drove seven hours out of his way home to Connecticut from Tennessee to pick Gary up in Florida.

“I felt lucky to have so much support from my family and friends during the entire experience,” said Gary.

On the drive to Connecticut, Gary tried to stay positive. But he started to get worried when he noticed a cognitive decline.

“I’ve always been very smart, especially when it comes to grammar and speaking. I was mispronouncing words and phrases more and more, which was unlike me.”

In good hands at Norwalk Hospital

When Dr. Sanderson first met Gary, he had a moderate speech deficit and he was stuttering.

“After examining Gary, it was clear he needed surgery to remove the meningioma. No doubt he would have gotten worse, because the tumor would have continued to grow and cause irreversible brain damage,” said Dr. Sanderson, who is also an assistant clinical professor of neurosurgery at New York University Medical Center.

Dr. Sanderson explained to Gary that the main risk of surgery was that his speech could be severely impaired; worst case scenario, he could come out of surgery and not be able to speak.

Danbury Hospital and Norwalk Hospital neurosurgeons perform about 50 brain surgeries every year and about one a month is a meningioma. Dr. Sanderson is a particularly skilled neurosurgeon because of his training at New York hospitals where he saw an extensive number of brain tumor cases. In addition to highly trained neurosurgeons, Danbury Hospital and Norwalk Hospital are equipped to handle these types of brain surgery cases because of the seasoned physician assistants, nurses, medical assistants, operating room staff, and intensive care unit staff who work so well together.

“I wanted a neurosurgeon who operates on a lot of brain tumors, and who is scared of failure,” said Gary. “When I first met Dr. Sanderson, it took me only a few seconds to know he was the guy for me.”

Getting the tumor out

A meningioma has blood vessels that supply it blood, which is how it grows. Dr. Sanderson recommended for Gary to have a procedure called tumor embolization the day before surgery to reduce blood supply to the tumor. This approach can result in a safer surgery and better outcome for the patient because there’s less blood loss and a cleaner field so the surgeon can be even more precise when removing the tumor.

Dr. Joshua Marcus — one of the only neurosurgeons in Connecticut with advanced training in endovascular surgery and interventional neuroradiology — performed the tumor embolization with a minimally invasive transfemoral artery approach. Dr. Marcus guided a catheter through an artery in Gary’s groin to his brain. When he reached the tumor, he placed surgical glue in large blood vessels to block blood supply to it.

The next day, Dr. Sanderson and a surgical team, including Dr. Marcus and Katie Swan, neurosurgical PA, successfully removed the meningioma.

“The surgery was eight hours long. About every half hour, Katie kept me and Danielle informed, which was very reassuring,” said Becky, who decided to keep herself busy with work because she knew she’d be anxiously pacing in the waiting room.

Becky and Danielle waited for a status update while Gary recovered from surgery in the Intensive Care Unit (ICU). Not long after Gary’s surgery, they got great news.

“Danielle and I were so relieved when Dr. Sanderson said Gary was talking!” exclaimed Becky.

“We take all surgical cases very personally, which is why we are always cautious and meticulous. Gary’s situation particularly hit home because he’s part of the Norwalk Hospital family,” said Dr. Sanderson. “We were extremely pleased that he was able to talk soon after waking up from surgery, and that he had an overall great outcome.”

“After I woke up from surgery, the first thing I said to Dr. Sanderson was, ‘Doc, you’re a rock star, you saved my life.’ Then, I asked for coffee,” said Gary.

Gary spent four days at Norwalk Hospital after his surgery before going home to Becky’s house, where he stayed for a month. His discharge plans were simple: rest and ibuprofen for pain, of which he had very little.

“I’ve always been very independent — I’ve been taking care of myself since I was 17 years old. So I’m especially thankful that I was able to maintain my independence without any permanent limitations from the brain tumor,” said Gary. “I can’t think of how this could have gone any better. I didn’t even need physical therapy or speech therapy.”

Gary continued, “I had an alien living in my head, trying to knock me off my pedestal of being the smartest guy on earth. I’m back to my normal self, but I’m the second smartest guy now. Dr. Sanderson is the first.”

“We have excellent, core doctors that truly care about their patients. In my heart, I knew Gary would have the best care at Norwalk Hospital,” said Becky. “I’m very glad that he’s doing so well now.”

When Gary first experienced symptoms of the brain tumor, he kept repeating the numbers “0-1-4”. After his surgery, 0-1-4 were Connecticut Play 3 winning lottery numbers! Go figure.