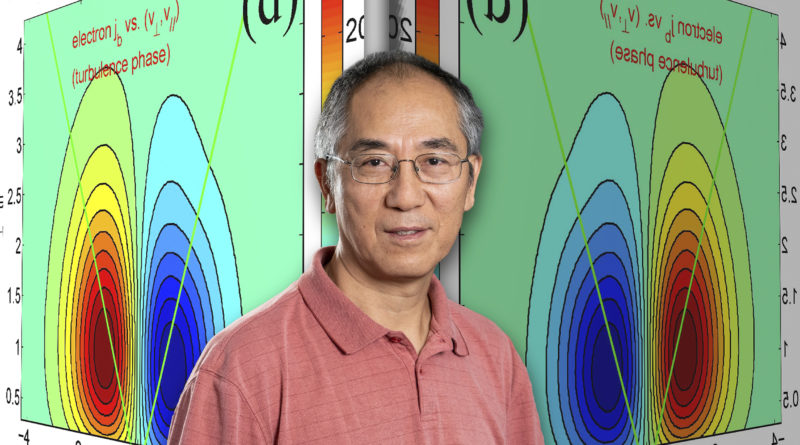 The swirls created by milk poured into coffee or the shudders that can jolt airplanes in flight are examples of turbulence, the chaotic movement of matter found throughout nature. Turbulence also occurs within tokamaks, doughnut-shaped facilities that house the plasma that fuels fusion reactions. Now, scientists at the U.S. Department of Energy’s (DOE) Princeton Plasma Physics Laboratory (PPPL) have discovered that turbulence may play an increased role in affecting the self-driven, or bootstrap, current in plasma that is necessary for tokamak fusion reactions.

Fusion, the power that drives the sun and stars, is the fusing of light elements in the form of plasma — the hot, charged state of matter composed of free electrons and atomic nuclei, or ions — that generates massive amounts of energy. Scientists are seeking to replicate fusion on Earth for a virtually inexhaustible supply of power to generate electricity.

For fusion to occur in tokamaks, the plasma must be confined by a cage of magnetic fields that shape and control the hot, charged matter. The bootstrap current plays an important role in creating the cage and disturbing it could affect the confinement of the plasma and the production of fusion reactions.

“It turns out that turbulence may significantly affect the bootstrap current,” said PPPL physicist Weixing Wang, lead author of a paper reporting the results in Nuclear Fusion. “This is a potential effect that needs to be taken fully into account.”

For large tokamaks like ITER, the multinational fusion facility being built in France to demonstrate the practicality of fusion energy, weakening the self-driven current could decrease the energy gain in discharges with fully non-inductive, or non-pulsed, currents. Such weakening means that more of the overall plasma current would have to be created by external means like radio waves rather than by the self-generated bootstrap current that naturally occurs in tokamaks.

Though there is no fusion device with an entirely self-driven current in operation, the findings from this computational and theoretical study can be tested and validated by current fusion experiments for non-pulsed steady-state scenarios achievable on tokamaks including the DIII-D National Fusion Facility, a DOE Office of Science user facility operated by General Atomics. More massive supercomputer simulations will be required to answer important questions, such as how much self-driven current may be expected in future burning plasma experiments.

The research team includes scientists from Seoul National University. Simulations were performed on the Edison computer at the National Energy Research Scientific Computing Center, a DOE Office of Science User Facility at Lawrence Berkeley National Laboratory in Berkeley, California. Support for this research was provided by the DOE’s Office of Science and the SciDAC Tokamak Disruption Simulation project. Support also came from the R&D Program of ITER Burning Plasma Research and Development of the ITER Plasma Exploitation Plan through the National Fusion Research Institute of Korea.

PPPL, on Princeton University’s Forrestal Campus in Plainsboro, N.J., is devoted to creating new knowledge about the physics of plasmas — ultra-hot, charged gases — and to developing practical solutions for the creation of fusion energy. The Laboratory is managed by the University for the U.S. Department of Energy’s Office of Science, which is the single largest supporter of basic research in the physical sciences in the United States and is working to address some of the most pressing challenges of our time. For more information, visit https://energy.gov/science