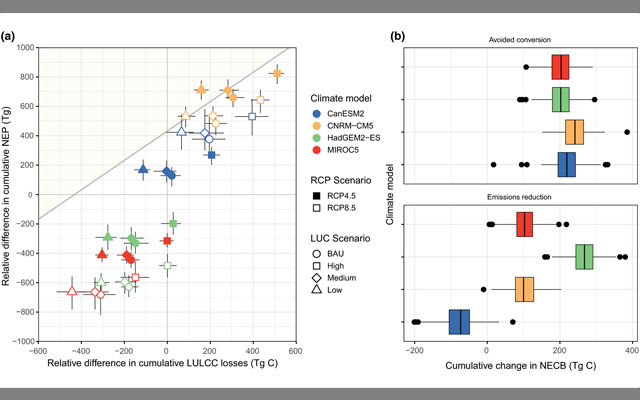 Their conclusion? The amount of carbon held in the Earth’s terrestrial ecosystems is likely to decline by approximately 10 percent through the year 2100.

“Since 1850, land-use change has added nearly half as much carbon to the atmosphere as fossil fuel emissions and has exerted a dominant influence on the storage of carbon in terrestrial ecosystems,” said Benjamin Sleeter, lead author of the study and a research geographer with the US Geological Survey (USGS) in Seattle, WA. “Our research presented the foundation to help assess how and where to implement changes to the way we manage our natural landscapes in our state and beyond.”

These disturbed ecosystems discussed in the study refer to California’s forests, shrublands, grasslands, and soils. When carbon dioxide – absorbed by vegetation and stored as carbon in the form of branches, trunks, roots, and in soil – is released back to the atmosphere, it can contribute to the acceleration of climate change. While this cycle of absorption and release is a very natural process, the researchers said that humans have accelerated the releases and slowed the absorption.

Sleeter said that he and his colleagues used Comet to investigate this notion in an objective light. That is, using USGS sources, they created simulations of a combination of four global climate models, four land use models, and two emissions models.

“Access to Comet allowed us to perform a rigorous uncertainty assessment by running four of the 32 scenarios many times,” said Sleeter. “We discovered that no matter how we ran the calculations, carbon dioxide will decline by nearly 10 percent within the next 80 years unless we work with policy-makers to promote both reduced land development and global climate action.”

While the four models were representative of all 32 scenarios, the results would likely be different if all 32 models were assessed, explained Sleeter. “More importantly, our framework didn’t include variability in key parameters, such as changes in vegetation type, which may result from the coupled effects of climate change and high-severity fire.”

The researchers plan to address these issues in subsequent studies.

Funding for this research was provided by the USGS’s Biological Carbon Sequestration Program and Climate and Land Use Research & Development Program. Additional funding was provided by The Nature Conservancy (Grant #18WSZL00TNC201802). Access the SDSC’s Comet supercomputer was done via the National Science Foundation’s Extreme Science and Engineering Discovery Environment (XSEDE), which is supported by NSF grant ACI‐1548562.