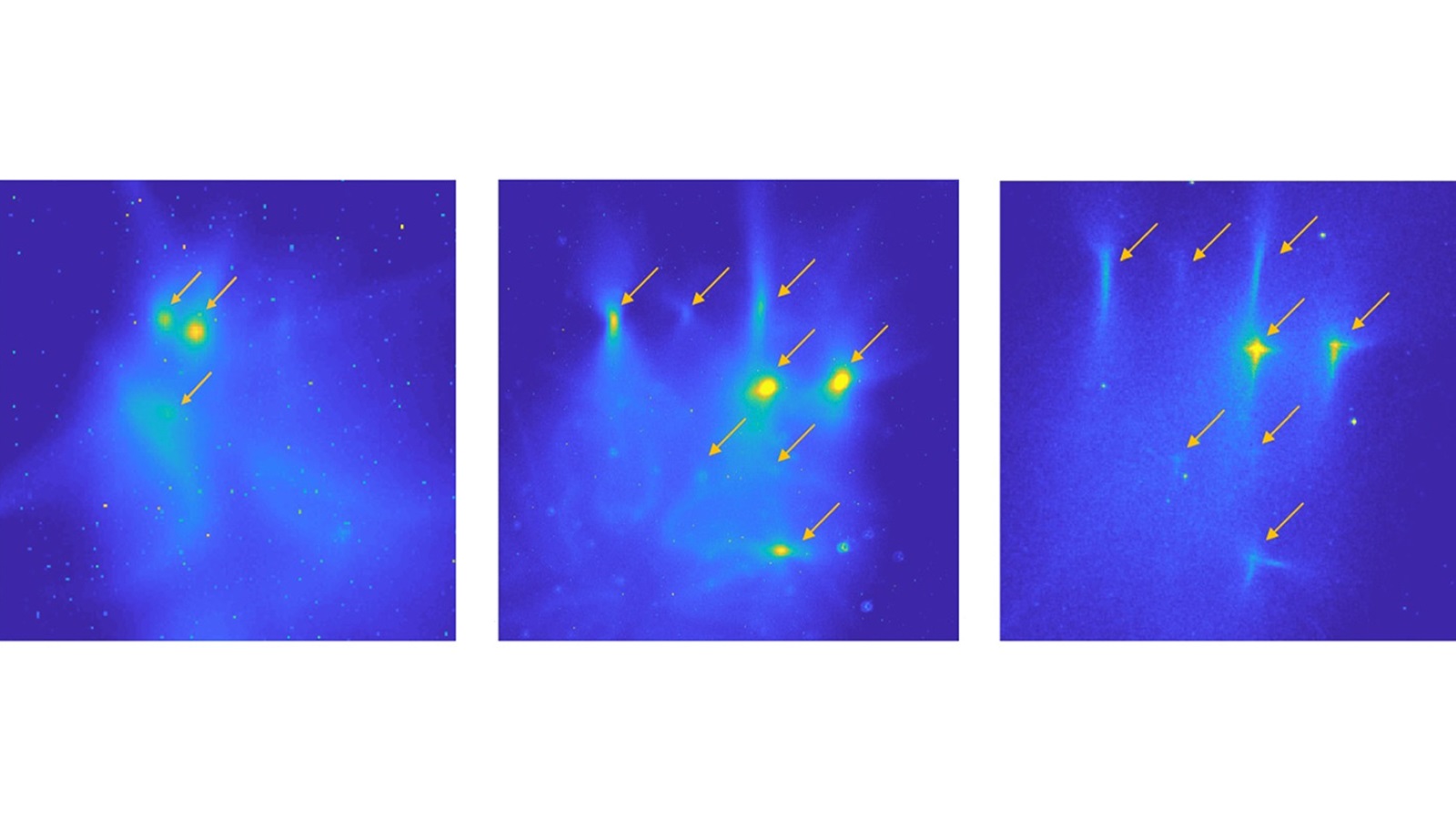 Beam-driven wakefield acceleration approaches are promising candidates for future large-scale machines, including X-ray free electron lasers and linear colliders, as they have the potential to improve efficiency and reduce operation cost.

One of the key factors that drives this efficiency improvement involves manipulating the temporal distribution of beams of electrons. Over the past few decades, researchers have investigated a number of different mechanisms that successfully produce temporally shaped electron beams of varied quality with different limitations.

“It’s as if by applying these fields we can change a brick wall into drywall — it’s much easier to go through it.” — Argonne accelerator physicist Jiahang Shao

In a new study from the U.S. Department of Energy’s (DOE) Argonne and Los Alamos national laboratories, scientists used a phenomenon called field emission to explore the use of arrays of tiny diamond tips to produce what they hoped would be a transversely shaped electron beam. The beam will then be sent into an emittance exchange beamline to convert the transverse distribution into the temporal one.

Field emission works by decreasing the quantum barriers that electrons can, according to the laws of probability, occasionally tunnel through. “It’s as if by applying these fields we can change a brick wall into drywall — it’s much easier to go through it,” said Argonne accelerator physicist Jiahang Shao, an author of the study.

The advantage of field emission cathodes, according to Shao, is that they require neither a heat source nor an expensive laser setup. “We’re using electric fields regardless when it comes time to accelerate the electrons,” Shao said. “It’s not much more inconvenient to use them to generate them in the first place.”

To successfully use the field emission technique, the researchers needed to apply a very strongly concentrated electric field directly on the surface of the cathode. To do so, they created a film of diamond that contained diamond pyramids approximately 10 micrometers on a side with nanometer-scale tips on top that were arranged into a one-millimeter equilateral triangle.

The experimental study is conducted on the Argonne Cathode Test-stand (ACT) beamline at the Argonne Wakefield Accelerator facility. “Generating a transversely shaped beam by field emission is the first step of the project, and we are exploring different emitter geometries as well as (radio-frequency) rf gun operation parameters,” Shao said.

According to Argonne accelerator scientist Manoel Conde, another author of the study, the researchers were trying to balance two separate but competing phenomena by using these diamond field-emitter arrays. The scientists needed to generate as high a current as possible of electrons leaving the material; however, they wanted to mitigate the expelling force between electrons to maintain the triangle shape during emission and transportation.

An article based on the study, “Demonstration of transport of a patterned electron beam produced by diamond pyramid cathode in an rf gun,” appeared in the January 2020 issue of Applied Physics Letters and reported the successful demonstration of generation and transportation of a transversely shaped electron beam from a diamond field-emitter arrays cathode in an rf gun. Another article, “Shaped beams from diamond field-emitter array cathodes,” appeared in the July 2020 issue of IEEE Transactions on Plasma Science and reported the continuous geometry optimization of diamond field-emitter arrays. In addition to Shao and Conde, other Argonne authors included Darrel Doran, Gwanghui Ha, Wanming Liu, John Power and Eric Wisniewski. Other authors included Heather Andrews, Kimberley Nichols, Dongsung Kim and Evgenya Simakov from Los Alamos National Laboratory, as well as Sergey Antipov from Euclid Techlabs and Gongxiaohui Chen from the Illinois Institute of Technology.

This work was performed, in part, at the Center for Integrated Nanotechnologies, an Office of Science User Facility operated for the DOE Office of Science. There, scientists used Fluorine Inductively Coupled Plasma for silicon etching, Karl Suss Mask Aligner for photolithography and Nova NanoSEM 450 for scanning electron microscopy.