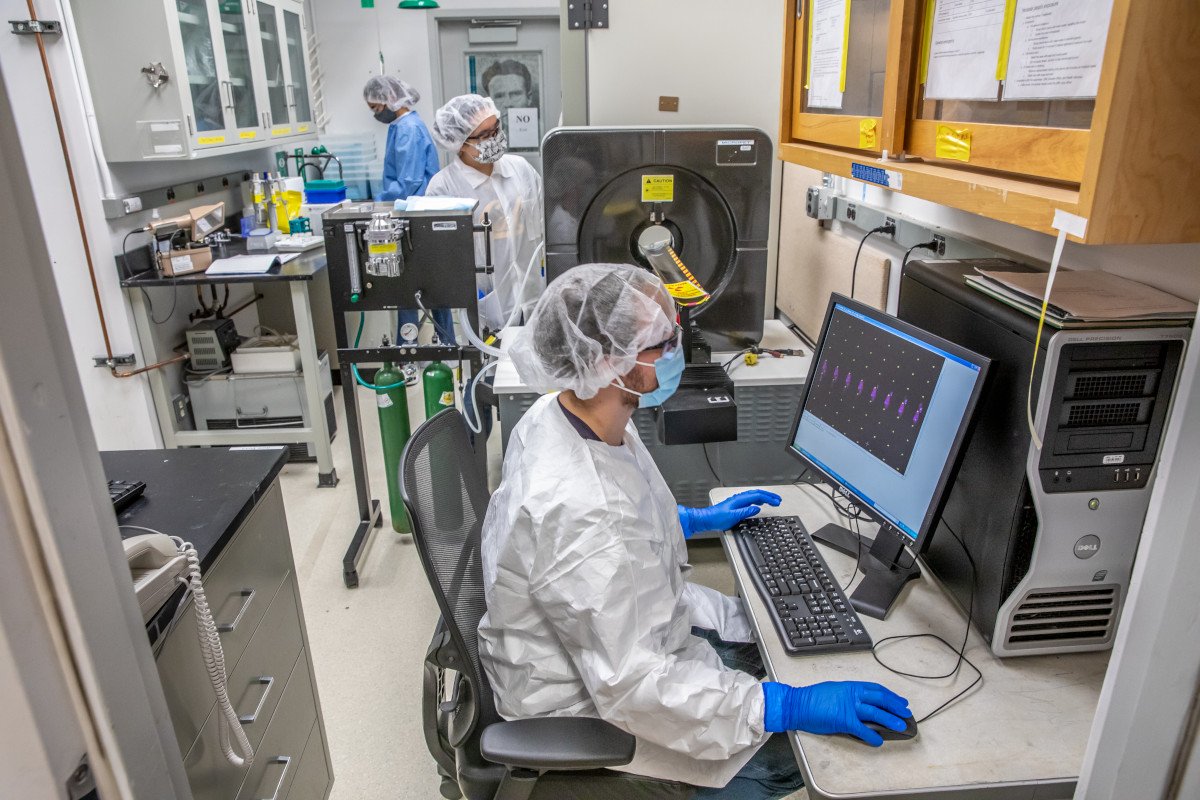 A promising approach to treating cancer – called targeted alpha-particle therapy or TAT – could better harness the curative power of radiation treatments and lessen the severity of their more debilitating side effects.

While interest in TAT has been steeply growing in the past years, clinicians do not have a good method for monitoring whether these drugs actually hit their target once they’ve entered a patient’s bloodstream. That’s because the gold standard for imaging in nuclear medicine – positron emission tomography, or PET – only detects positron-emitting radioisotopes, and therefore can’t directly detect the alpha-emitting radioisotopes central to TAT.

Now, a solution is in sight. A collaboration between researchers supported by the DOE Isotope Program in the U.S. Department of Energy’s Lawrence Berkeley National Laboratory (Berkeley Lab) and Los Alamos National Laboratory (LANL) has led to the development of new methods for the large-scale production, purification, and use of the radioisotope cerium-134, which could serve as a tunable PET imaging surrogate for several alpha-emitting therapeutic isotopes.

Their findings, reported in the journal Nature Chemistry, also have implications for the use of a single molecular system for both the diagnosis and targeted treatment of cancer in real time.

“Our study demonstrates the power of designing small molecules that will control the chemistry of metallic elements for different applications in nuclear medicine,” said senior author Rebecca Abergel, a faculty scientist who leads the BioActinide Chemistry and Heavy Element Chemistry groups in the Chemical Sciences Division at Berkeley Lab, and Assistant Professor in nuclear engineering at UC Berkeley. “But what’s even more exciting is that the newly demonstrated large-scale production of new alpha-compatible PET-imaging isotopes through the DOE Isotope Program may also serve as a roadmap for making targeted alpha-emitting therapies more widely available,” she added.

Knocking out neutrons: Ringside with cerium-134

Ever since whole-body PET scanning was first developed in the 1970s, scientists all over the world – including chemists and nuclear physicists at Berkeley Lab, a driving force in the emergence and growth of nuclear medicine since the 1930s – have been working on ways to produce new radioisotopes for PET imaging and other medical applications.

In the 1990s, researchers proposed that cerium-134 – a radioisotope of cerium, an abundant, rare earth element – could be useful for PET. But proving that theory in practice has been a challenge, because very few research institutions have ready access to multidisciplinary teams with expertise in radiochemistry, nuclear physics, nuclear data, and medicine – the hallmarks of nuclear medicine.

Berkeley Lab, on the other hand, with its rich legacy in nuclear medicine, nuclear physics, and particle physics, has the resources, capabilities, and infrastructure to work with radioisotopes and chemicals in biological systems, and to collaborate with big scientific teams and laboratories, Abergel said.

“And what makes this such a beautiful project is that it is truly a collaboration between people from very different fields. It takes a lot of moving parts,” she added, citing early inspiration for revisiting the idea of making cerium-134 from an informal brainstorming session with co-author Jonathan Engle, a nuclear physicist visiting from LANL at the time (now an assistant professor at the University of Wisconsin, Madison); and Jim O’Neil, a radiochemist in Berkeley Lab’s Molecular Biophysics and Integrated Bioimaging Division who passed away just before Abergel and her team received funding to perform the work. (In recognition of O’Neil’s contributions to those formative discussions, Abergel and co-authors dedicated the paper to O’Neil.)

To produce cerium-134, one must induce nuclear reactions by irradiating a naturally occurring stable element, such as lanthanum, a neighbor of cerium in the Periodic Table. Abergel credits an initial study performed at Berkeley Lab’s 88-Inch Cyclotron and led by Lee Bernstein, head of Berkeley Lab’s Nuclear Data Group and a UC Berkeley associate professor of nuclear engineering, for insight into the best irradiation parameters for the largest cerium-134 production possible. This effort was conducted alongside a nuclear data study at the Los Alamos Neutron Science Center (LANSCE) Isotope Production Facility (IPF) to expand the available energy range that could be investigated and to explore relevant production conditions.

At the IPF, a team led by co-author Etienne Vermeulen, a staff scientist at LANL, began the arduous process of making cerium-134 from lanthanum by irradiating a sample of naturally occurring lanthanum with a 100 mega-electron-volt (MeV) proton beam. The IPF is stewarded by the DOE Isotope Program that produces isotopes in short supply for a suite of applications, including medical applications.

Bombarding lanthanum with this proton beam generated a nuclear reaction that knocked out not just one, but “two, three, four, five, six neutrons,” and generated cerium-134 within the lanthanum target, said Stosh Kozimor, the principal investigator for the LANL portion of the project.

The irradiated lanthanum targets are remotely handled inside protective “hot cells,” behind two feet of leaded glass. The radioisotopes are then processed and purified at the Los Alamos Radiochemistry Facility.

Purifying and separating cerium-134 from an irradiated lanthanum sample is much easier said than done. On the periodic table, cerium and lanthanum sit next to each other in the heavy metal “f block” – the lanthanides. And because cerium-134 has a very short half-life – or the amount of time it takes for one-half of the radioisotope to decay – of just 76 hours, such a procedure would need to be done quickly, Abergel said.

All lanthanides are large oxygen-loving atoms and are most stable in an oxidation state of +3, which means it can acquire three electrons to form a chemical bond.

And when lanthanides are sitting next to each other in a piece of rock, for example, one oxygen-loving atom likes to hold onto the same molecular handle as the other oxygen-loving atom. “Separating adjacent lanthanides from one another is one of the hardest separations in inorganic chemistry,” said Kozimor.

However, by removing one of cerium-134’s negatively charged electrons and thus changing its oxidation state from +3 to +4, you can easily separate cerium-134 from lanthanum and other impurities, which is how the team processed the irradiated lanthanum sample.

The results from the separation and purification experiment – a high yield of over 80% – are stunning, Kozimor said, adding that the impressive outcome produces quantities of high-purity cerium-134 that could supply several PET scans.

Two promising targeted alpha-emitting therapies for prostate cancer and leukemia are the actinide isotopes actinium-225 and thorium-227. Actinium-225 has an oxidation state of + 3, and thorium-227 has an oxidation state of + 4 – these different chemistries direct them to adopt different biochemical behaviors and follow distinct paths throughout the body.

To demonstrate companion PET isotopes for alpha-emitting therapies, the researchers tuned the oxidation state of cerium-134 to either actinium-225’s +3 favored state, or to thorium-227’s +4 state. Having the same oxidation state as an alpha-emitting therapy would send cerium-134 to either actinium-225’s +3 route, or to thorium-227’s +4 route to diseased cells before exiting the body, the scientists reasoned.

To that end, they encapsulated cerium-134 in metal-binding molecules called chelators. This was intended to prevent the radioactive metal from reacting to random places in the body with the chelator sustaining the oxidation state of cerium-134 at either +3 or +4.

PET scans of mouse models performed by Abergel and her team at Berkeley Lab showed that the chelators effectively maintained the tuned oxidation state of cerium-134. For example, cerium-134 radioisotopes tuned to a stable oxidation state of +3 when bound to polyaminocarboxylate chelator DTPA and cleared through the kidneys and urinary tract – the same pathway followed by the alpha-emitting therapy actinium-225.

In contrast, cerium-134 radioisotopes tuned to a stable oxidation state of +4 when bound to HOPO, a hydroxypyridinonate chelator, and were cleared from the body through the liver and fecal excretion, the scientists reported.

Encouraged by these early results, the researchers next plan to investigate methods for attaching cell-targeting antibodies to the chelated cerium-134, and to demonstrate the targeting of cancer cells in animal models for diagnostic and therapeutic medical applications.

If successful, their technique could radically transform the way we treat cancer, Abergel said. Clinicians could monitor whether a patient is responding to alpha-emitting therapies like actinium-225 or thorium-227 in real time, she said.

Their study could also help medical researchers develop personalized medicine, Kozimor added. “If you develop a new drug and you’ve got a radionuclide that does PET imaging, you can use our technique to check how a patient is responding to a new drug. To watch your medicine in real time – that’s the new frontier.”

The Isotope Production Facility located at LANL is operated by the DOE Isotope Program in the Office of Science.

The research was supported by the DOE Office of Science.

Founded in 1931 on the belief that the biggest scientific challenges are best addressed by teams, Lawrence Berkeley National Laboratory and its scientists have been recognized with 14 Nobel Prizes. Today, Berkeley Lab researchers develop sustainable energy and environmental solutions, create useful new materials, advance the frontiers of computing, and probe the mysteries of life, matter, and the universe. Scientists from around the world rely on the Lab’s facilities for their own discovery science. Berkeley Lab is a multiprogram national laboratory, managed by the University of California for the U.S. Department of Energy’s Office of Science.

Study finds how our brains turn into smarter disease fighters