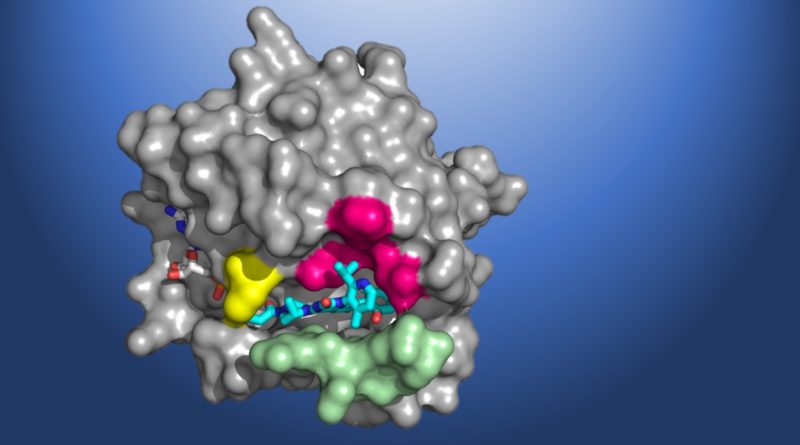 An investigational cancer drug that targets tumors caused by mutations in the KRAS gene will be evaluated in phase 2 clinical trials, following promising safety and efficacy results in preliminary human studies and excellent results in animal studies. The drug, developed by Amgen and currently referred to as AMG 510, is the first therapy to reach clinical trials that inhibits a mutant KRAS protein. Errors in the KRAS gene, which encodes a crucial cell signaling protein, are one of the most common causes of cancer. The particular mutant inhibited by AMG 510 – called KRAS(G12C) – is present in approximately 13% of lung adenocarcinomas, 3% of colorectal cancers, and 2% of other solid tumors.

Despite its significant role in the pathogenesis of cancer, scientists have been unable to design KRAS-specific therapeutics due to the shape of the protein – it has an exceptionally smooth surface with no obvious regions for a drug molecule to bind. Seeking to develop a long-sought direct inhibitor, researchers at Amgen conducted X-ray crystallography of KRAS(G12C) proteins at Berkeley Lab’s Advanced Light Source (ALS). The high-resolution structural maps generated using the data acquired at the beamlines helped Amgen make the breakthrough discovery of a small pocket on the molecule. In subsequent studies, the beamline data allowed scientists to investigate atomic-level molecular interactions between KRAS(G12C) and potential inhibiting compounds that bind in this pocket. AMG 510 emerged as a very promising candidate after a multiyear drug agent optimization program.

“It’s rare that a compound gets all the way through the development process and becomes a drug. So, for the BCSB team, it feels great to see our (small) contribution finding its way to fight diseases,” said Marc Allaire, one of the Berkeley Lab biophysicists who operate the BCSB beamlines.

Read more about the development of AMG 510 and its early clinical results.

These Artificial Proteins Have a Firm Grasp on Metal

A team of scientists led by Berkeley Lab has developed a library of artificial proteins or “peptoids” that effectively “chelate” or bind to lanthanides and actinides, heavy metals that make up the so-called f-block elements at the bottom of the periodic table.

The new library offers researchers an automated, high-throughput method for precisely designing new peptoids – protein-like polymers with a precise sequence of monomer units – that chelate lanthanides such as gadolinium, a common ingredient in MRI contrast agents, and actinides such as plutonium.

As reported in the journal Chemical Science, the researchers incorporated custom-made monomers with f-block-binding properties onto peptoid scaffolds at Berkeley Lab’s Molecular Foundry. In this initial study, the researchers assembled two bio-inspired hydroxypyridinone and catecholamide monomers onto molecular complexes called “tetramers,” yielding a library of 16 chelating peptoids (also known as “ligands”). The researchers then used a luminescence-based technique to measure how well each chelating peptoid coordinated to the lanthanide cations (positively charged ions) europium and terbium.

The researchers discovered that the chelating systems featuring three and four hydroxypyridinone functional groups show a high affinity for lanthanide metals, and in particular europium, suggesting that these peptoid-based chelators could be used to design ligands tailor-made for a wide range of applications with f-block metals, such as chemical separation processes, optical device optimization, and pharmaceutical development. In addition, extending the researchers’ technique to incorporate additional monomers could potentially lead to much larger libraries.

Enamel is composed of hydroxyapatite, a biomineral that forms long and thin 50-nanometer wide nanocrystals, bundled into rods like uncooked spaghetti in tubes. Previously, it was assumed that the nanocrystals’ internal structures (their lattices) were oriented in the same direction as the long axes of the rods and “spaghetti.”

But when the researchers studied enamel samples using X-rays produced by Berkeley Lab’s Advanced Light Source, they detected slight differences in the lattice orientations. “While the spaghetti nanocrystals are aligned parallel to each other,” said co-author and University of Wisconsin Professor of Physics Pupa Gilbert, “their crystal lattices are slightly misoriented from one nanocrystal to another.”

Computer simulations confirmed that slight misorientations are effective at preventing nanoscale cracks from spreading, thus protecting the enamel from catastrophic failure. Not only do the results help explain how human tooth enamel can last a lifetime, they also provide insight into strategies for designing similarly tough bio-inspired synthetic materials.