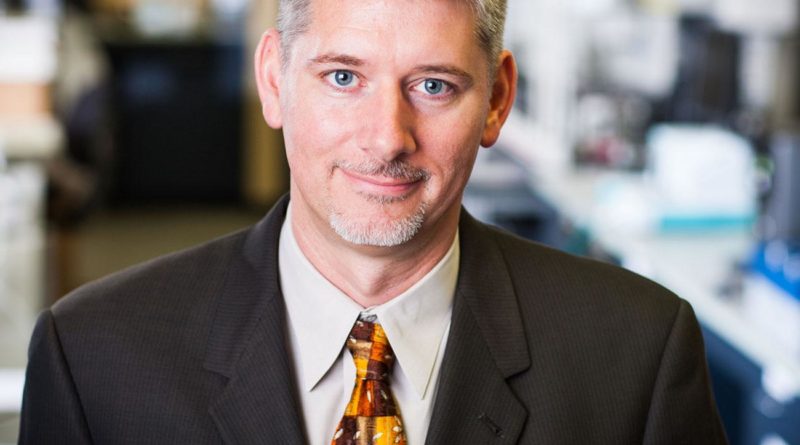 LA JOLLA, CALIF. – October 23, 2019 – The National Institute on Drug Abuse (NIDA), part of the National Institutes of Health (NIH), awarded a $3.58 million grant to Sanford Burnham Prebys scientist Anthony Pinkerton, Ph.D., to advance a potential treatment for opioid-use disorders, called SBI-553. With this funding, Pinkerton and the Conrad Prebys Center for Chemical Genomics at Sanford Burnham Prebys will collaborate with Duke University researchers Marc Caron, Ph.D., and Lawrence Barak, M.D., Ph.D., to complete preclinical testing of the compound to ready it for study in humans. If this milestone is achieved, NIDA will grant an additional $6.3 million to complete a Phase I study that evaluates the safety of the compound in healthy individuals. The grant was awarded as part of the Helping to End Addiction Long-term Initiative, or the NIH Heal Initiative, which awarded a total of $945 million in fiscal year 2019 to accelerate scientific solutions to address the national opioid crisis.

“One of the most dangerous times for a person struggling with opioid addiction is immediately after release from a treatment program, hospital or incarceration. Often they are re-sensitized to opioids and thus at high risk of overdose or relapse,” says Pinkerton, director of medical chemistry at the Prebys Center. “More preclinical studies are needed, but if successful, it’s possible that SBI-553 could be prescribed at this precarious time to help prevent relapse or overdose.”

Opioid-use disorder is a major public health crisis in the United States. In 2018, an estimated 10.3 million Americans over the age of 12 misused opioids, including heroin, fentanyl and oxycodone, leading to more than 50,000 fatal overdoses per year. A handful of medications—methadone, buprenorphine and naltrexone—are approved by the U.S. Food and Drug Administration (FDA) for the treatment of opioid-use disorder. However, these medications have limited effectiveness.

“There is a need for flexible and effective treatments to support individuals who have limited access to existing treatments for opioid-use disorders, or who do not do well with these otherwise life-saving medications,” says Carla Marienfeld, M.D., a psychiatrist at UC San Diego Health and associate professor of psychiatry in the UC San Diego School of Medicine. “Any compound that can help people with long-term recovery from opioid addiction would be a boon in the deadly opioid overdose crisis.”

Opioids are highly addictive because the drugs flood the brain with dopamine, the body’s feel-good neurotransmitter. Researchers have discovered that a receptor that regulates our dopamine response, called neurotensin receptor 1 (NTR1), can blunt the rewarding effects of opioids—making it a promising drug target. However, the receptor has been difficult to inhibit. Drugs that work by blocking the receptor’s active site—where the neurotensin peptide normally binds—have been studied in humans. However, these drug candidates had significant side effects, including hypotension (dangerously low blood pressure) and hypothermia, which limited further development.

The compound the team identified works differently. SBI-533 binds outside of the active site of the receptor—similar to altering a lock’s shape to allow a key to more easily turn. In mouse models of opioid addiction, the scientists showed that SBI-553 was able to help overcome addictive behaviors—including reducing self-administration of opioids and increasing time to relapse. In additional studies, the compound was found to be safe and did not cause hypothermia, hypotension, muscle relaxation or sedation. SBI-533 is a small-molecule compound, meaning it can be taken orally, and readily crosses into the brain, where NTR1 receptors are located.

In the first, two-year phase of the grant, the team aims to demonstrate that SBI-553 is safe and suitable for testing in a human trial—and will identify a backup compound that can be advanced if needed. The team will also fully explore the pharmacology of SBI-553 in a range of addiction models. If this milestone is achieved, the team will enter a second, two-year phase of the project, during which SBI-553 or the backup compound will undergo further safety and manufacturing preparations and advance into a Phase I trial overseen by Jeffrey Guptill, M.D., at Duke. Pinkerton leads the overall coordination of the grant’s aims, including lead-compound selection and optimization, manufacturing scale-up and good manufacturing practice activities that ensure quality standards are met. Caron and Barak lead the activities taking place at Duke, including lead-compound profiling and animal studies.

“Many dangerously addictive substances, including cocaine and methamphetamine, also activate the dopamine reward system,” says Pinkerton. “We hope this compound, if successful, might be able to help many people who struggle with different types of addiction. Even helping to prevent fatal overdoses would be a significant victory.”

The Helping to End Addiction Long-term Initiative, or NIH HEAL Initiative, is an aggressive, trans-NIH effort to speed scientific solutions to stem the national opioid public health crisis. Launched in April 2018, the initiative is focused on improving prevention and treatment strategies for opioid misuse and addiction and enhancing pain management. For more information, visit: https://heal.nih.gov.

Sanford Burnham Prebys is a preeminent, independent biomedical research institute dedicated to understanding human biology and disease and advancing scientific discoveries to profoundly impact human health. For more than 40 years, our research has produced breakthroughs in cancer, neuroscience, immunology and children’s diseases, and is anchored by our NCI-designated Cancer Center and advanced drug discovery capabilities. For more information, visit us at SBPdiscovery.org or on Facebook at facebook.com/SBPdiscovery and on Twitter @SBPdiscovery.