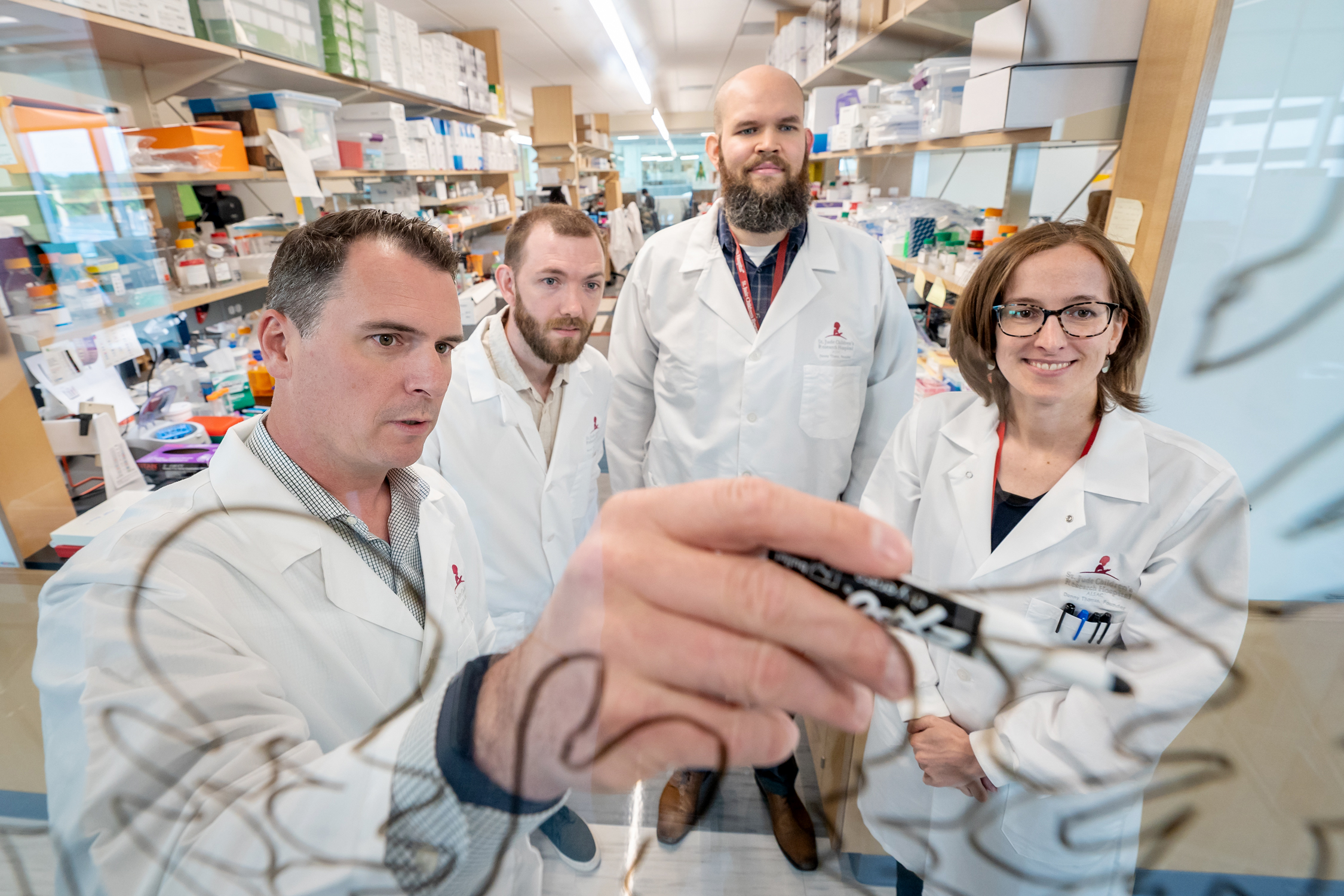 (Memphis, Tenn.—September 21, 2022) Scientists at St. Jude Children’s Research Hospital have discovered which cells give rise to certain high-risk groups of medulloblastoma. The findings will help researchers better understand the biology of the disease, as well as develop better research models and guide their hunt for therapeutic targets. The findings were published today in Nature.

Medulloblastoma is the most common malignant childhood brain tumor. There are four molecular subgroups: SHH, WNT, group 3 and group 4. Research has already revealed which neural tissues give rise to SHH and WNT: SHH from the external granule layer (where granule neurons develop) and WNT from the brainstem. However, where group 3 and group 4 medulloblastoma come from was harder to ascertain.

Now, scientists have tracked the developmental beginnings of group 3 and group 4 medulloblastoma to the rhombic lip, a structure present in the early development of the cerebellum. This is the first-time researchers have identified a specific origin for group 3 medulloblastoma and reinforces prior findings about group 4.

“There has existed this ambiguity and overlap between group 3 and group 4 that made it challenging to resolve their origins,” said corresponding author Paul Northcott, Ph.D., St. Jude Department of Developmental Neurobiology. “We’ve had evidence that these groups had some kind of common ancestry that then likely diverged depending on the genetic events driving those tumors, but we couldn’t say that definitively until now.”

“Having helped discover and describe groups 3 and 4 more than a decade ago, it’s been a burning curiosity for my lab to resolve their developmental biology and figure out whether they share a common ancestry,” Northcott said.

In 2019, Northcott and his team published an atlas of mouse cerebellar development. This work relied on single-cell transcriptional profiling and enabled the researchers to compare profiles from medulloblastoma patients to the mouse cerebellum. The previous mouse atlas work suggested that group 4 medulloblastoma originate from unipolar brush cells, which also trace back developmentally to the rhombic lip. But the origins of group 3 medulloblastoma remained murky.

Northcott then collaborated with the current study’s co-senior author Kathleen Millen, Ph.D., at Seattle Children’s. Millen and her team created the first atlas of human cerebellar development. Armed with the human atlas, Northcott and his team were able to look for the transcriptomic signatures of the different medulloblastoma subgroups in the context of the same species. Remarkably, the scientists found that both group 3 and group 4 likely arise from the rhombic lip, one of the major regions of the developing cerebellum.

“Once we had the human atlas everything just opened up,” Northcott said. “There were these clear, stark differences between human and mouse cerebellar development that showed how much more complexity there is in human development.”

Taking a cancerous turn along the path of development

Imagine the rhombic lip as the starting line at a race. There are stem and progenitor cells gathering, ready to take off. Once the cells start on their journey, they begin to diverge, going off in different directions to become distinct populations of cells.

The researchers matched these distinct populations of cells from the rhombic lip with group 3 and group 4 medulloblastomas. Group 3 cells are more primitive (they stayed closer to the starting line) whereas group 4 cells are further along in their development (they made it farther down the course).

The findings answer why group 3 and group 4 share some characteristics but are different. They arise from the same general area, but from different populations of cells along the trajectory of their development.

The findings also highlight the need for collaborative research that weaves together the expertise of different disciplines. For example, in addition to the transcriptomic analysis, the researchers also used imaging techniques to aid their research. Northcott and his team collaborated on this work with the late Zoltán Patay, M.D., Ph.D., who at the time served as the St. Jude Diagnostic Imaging Department chair.

An author on the paper, Patay recently said of the study: “This work highlights the need for, and value of, dialogue and an exchange of ideas between basic research scientists and clinical experts, including radiologists in research endeavors. This collaboration allowed synergistic mutual validation of observational magnetic resonance imaging findings and basic research data to determine the anatomical point of origin of these tumors in group 3 and 4 medulloblastoma. This is something that was uniquely possible at St. Jude.”

Aside from answering a burning biological question, the findings may help researchers design better models for studying these subgroups. Understanding the cell of origin will also allow researchers to compare the original and tumor cells to gain a more nuanced understanding of tumor specific dependencies that can be explored therapeutically.

The study was supported by the Sontag Foundation, St. Baldrick’s Foundation, a Pew-Stewart Scholar for Cancer Research award, a Future Leaders Award from the Brain Tumor Charity and ALSAC, the fundraising and awareness organization of St. Jude.