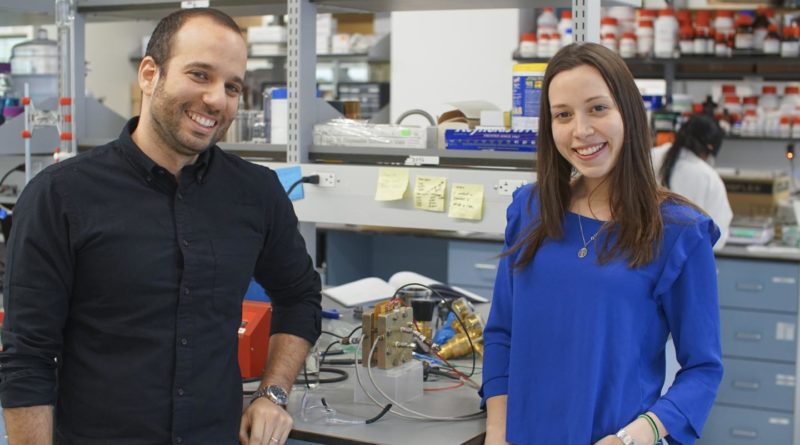 A team at the NYU Tandon School of Engineering reported that in its search to develop an innovative, environmentally friendly process to make adiponitrile (ADN) – the main precursor to nylon 6, 6 – it found a way to greatly improve the efficiency of organic electrosynthesis. The researchers credited their success in part to what they believe is the first use of artificial intelligence to optimize an electrochemical process.

Miguel Modestino, a professor of chemical and biomolecular engineering, and doctoral student Daniela Blanco tweaked how electrical current is delivered to catalytic electrodes and then applied artificial intelligence (AI) to further optimize the reaction. By doing so they achieved a 30% improvement in ADN production

The findings, detailed in the

Proceedings of the National Academy of Sciences

), could have major implications since the team targets one of the largest organic electrosynthesis processes in the chemical industry: the electrohydrodimerization of acrylonitrile (AN) to ADN.

Demand for ADN is high and growing: The market for nylon is expected to increase 4% annually through 2023. Only one company currently uses a Monsanto-invented electrochemical process to make ADN; the lion’s share of the nylon precursor is made via a toxic, energy intensive thermal hydrocyanation of butadiene. By contrast, electrosynthesis of ADN is a green, efficient, chemical process that uses water-based electrolytes and can be directly coupled with renewable electricity sources such as wind or sunlight.

The standard electrosynthetic process for ADN employs an “always on” direct electrical current delivered to the electrocatalytic site. But the NYU Tandon researchers found that a direct current did not maximize output of ADN and generated a great deal of the unwanted byproduct propionitrile (PN). They decided to engineer a system that delivers an intermittent current to constantly replenish reagent concentration at the electrocatalytic site (a phenomenon called mass transport) and improve ADN output.

The pair supplied an artificial neural network with data from 16 different experimental cases of pulse times.

“By analyzing electrochemical pulse techniques with AI, we were able to visualize ADN conversion efficiency across a range of pulse times without having to do more than a few physical experiments,” said Modestino. “This innovative, integrated approach led to an unprecedented 30% improvement in ADN production and a 325% increase in the ratio of ADN to PN, mostly due a large decrease in production of the latter.”

Blanco explained that this technique could advance industry adoption of more sustainable processes. That is exactly what she and a former student in Modestino’s laboratory envisioned when they founded a green-chemistry startup company, Sunthetics, to commercialize a sustainable nylon production process based on their research.

“We wanted to show with this new research that we can make the ADN electrochemical process more competitive,” she said. “Currently only 30% of global ADN output employs electrosynthesis; the rest of production involves processing over an energy- and oil-intensive catalytic reactor,” she said.

The next step for the team will be to use this AI approach to accelerate their research endeavors. “Instead of using a classical research model involving lengthy experimental campaigns, AI tools can help us predict experimental outcomes. To the best of our knowledge, this is the first time AI has been used to optimize an electrochemical process,” Modestino said.

The paper, “Optimizing organic electrosynthesis through controlled voltage dosing and artificial intelligence,” is available at

. This research is funded in part by the H&M Foundation.


About the New York University Tandon School of Engineering

The NYU Tandon School of Engineering dates to 1854, the founding date for both the New York University School of Civil Engineering and Architecture and the Brooklyn Collegiate and Polytechnic Institute (widely known as Brooklyn Poly). A January 2014 merger created a comprehensive school of education and research in engineering and applied sciences, rooted in a tradition of invention and entrepreneurship and dedicated to furthering technology in service to society. In addition to its main location in Brooklyn, NYU Tandon collaborates with other schools within NYU, one of the country’s foremost private research universities, and is closely connected to engineering programs at NYU Abu Dhabi and NYU Shanghai. It operates Future Labs focused on start-up businesses in downtown Manhattan and Brooklyn and an award-winning online graduate program. For more information, visit

This part of information is sourced from https://www.eurekalert.org/pub_releases/2019-08/ntso-rua082619.php