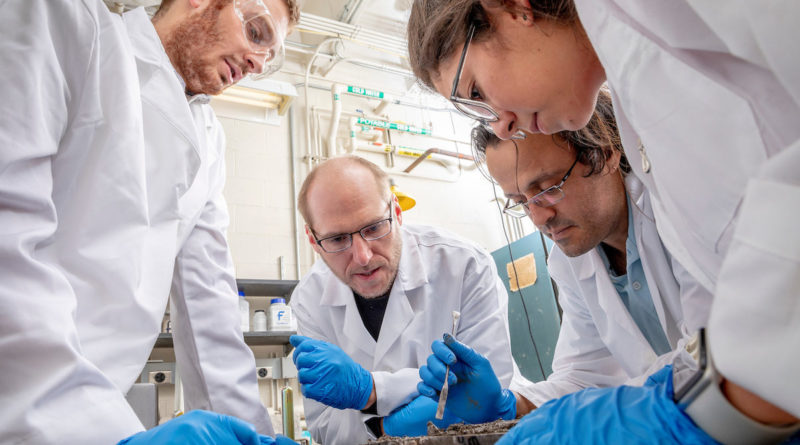 Last spring’s historic flooding along the Missouri and Mississippi rivers may have distributed toxic contaminants along wide flood routes. Researchers know little about how these materials may affect public health and safety in rural and urban areas. But a group of geologists and geological engineers from Missouri University of Science and Technology is working to find out.

The Missouri S&T researchers are working with the National Science Foundation (NSF) to study the effects of contaminants on soils as well as rivers, lakes, ponds and groundwater through wells.

“When you are looking into the entire Midwestern area over the last year, we’ve seen a terrifying increase in catastrophic floods,” says Dr. Marek Locmelis, assistant professor of geosciences and geological and petroleum engineering at Missouri S&T. “The problem is that we just don’t really understand that well how floods move all kinds of contaminants simply because in the past, these floods have been fairly infrequent and poorly studied.”

With funding from an NSF rapid response grant of almost $45,000, three Missouri S&T researchers are working to identify floodwater contaminants, understand how they are transported and deposited, and determine any potential public health risks.

In urban areas, Locmelis says it is likely that toxic organics such as gasoline, metals or pesticides are moved by floodwaters. In rural areas, the researchers expect to find large amounts of fertilizer swept away by floods from agricultural areas that farmers fertilized repeatedly over many years.

“Now that you have a flooding event rinsing entire agricultural areas, you re-mobilize all those theoretically good nutrients,” says Locmelis. “But you can potentially trap them in areas where they are so rich that they can create toxic conditions.”

The researchers point to examples of too many fertilizer nutrients such as nitrogen and phosphorus creating algal blooms in lakes or ponds that can kill all aquatic life.

“The Mississippi River gets a lot of rain in the spring. Much of the water eventually ends up in the Gulf of Mexico, where it concentrates nutrients and creates a zero-life zone,” says Dr. Jonathan Obrist-Farner, assistant professor of geosciences and geological and petroleum engineering at Missouri S&T. “The nutrient overload creates toxic conditions and kills everything. We want to know if we will see the same response in smaller systems near the flooded area close to these rivers.”

Not only are contaminant levels dangerous for soil and aquatic health, but they can also seep into aquifers, posing health risks for drinking water and agriculture.

“The risk of aquifer contamination rises when there are permeable pathways into the ground, but some sediments can help filter out the contaminants,” says Dr. Ryan Smith, assistant professor of geosciences and geological and petroleum engineering at Missouri S&T. But Smith says they have little data to understand how much contamination will occur after a major flooding event.

The team is gathering samples of soils and water from floodplain and non-flooded areas near the Missouri and Mississippi rivers – upstream and downstream – south of St. Louis and northwest of St. Louis near St. Charles, Missouri. They will analyze the samples for pH – a measure of how acidic or basic a solution is – and metal composition, as well as for other organic materials that point to a loss or enrichment of nutrients.

The Missouri S&T researchers bring diverse specialties to the project. Obrist-Farner is a sedimentologist who will look at how conditions in St. Louis-area lakes have changed based on the amount of nutrients that have entered the lakes. Locmelis, the principal investigator, is a geochemist who aims to understand how these chemical compounds are transported, where they are deposited and how long they stay in an area. Smith, a remote sensing hydrologist, will use satellites to determine floodwater extents and ground data to study how the floodwaters have changed groundwater quality.

They hope to help leaders in the region better understand how floods affect the soil and water and better recover from these increasingly common natural disasters.