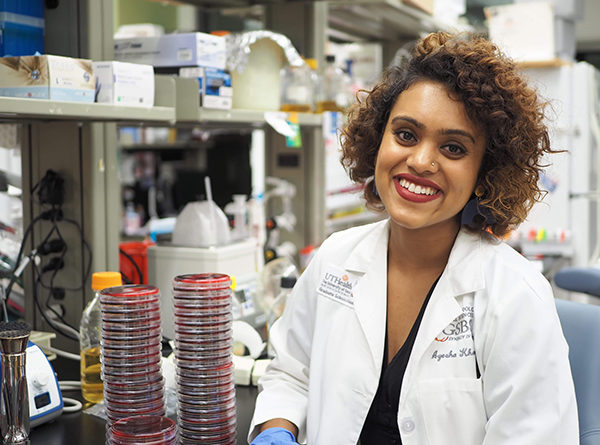 A deadly superbug that infects an estimated 54,500 Americans a year has a secret weapon, a protein, that allows it to defy antibiotic treatment and immune system attacks. However, the secret is out now that researchers at The University of Texas Health Science Center at Houston (UTHealth) have identified the protein that acts as a defense mechanism for vancomycin-resistant enterococci (VRE). Their discovery opens the door for future treatment options in the fight against antibiotic resistance.

“We know that bacteria have innate stress response systems, but we do not understand fully how these responses are triggered to cause antibiotic resistance,” said Ayesha Khan, a doctoral student in the Microbiology and Infectious Diseases Program at The University of Texas MD Anderson Cancer Center UTHealth Graduate School of Biomedical Sciences, and the study’s lead author.

The research, published in the December issue of the Proceedings of the National Academy of Sciences of the United States of America, revealed that a protein called LiaX is released by bacteria into the environment to sense the presence of antibiotics, causing restructuring of the bacterial cell that prevents the drug from destroying it. VRE is on the Centers for Disease Control’s latest threat report and is most commonly associated with health care settings. It can lead to serious complications, causing nearly 5,400 deaths in 2017 in the U.S.

“We have uncovered the ‘Achilles’ heel’ of an important hospital-associated and multidrug-resistant pathogen,” said senior author Cesar Arias, MD, PhD, a professor at McGovern Medical School at UTHealth and Herbert L. and Margaret W. DuPont Chair in Infectious Diseases. “By identifying the main mediator of the response against antibiotics and the first line of defense of our immune system, this will open major therapeutic and diagnostic research avenues against these organisms which are associated with disease in critically ill patients.”

The researchers studied clinical strains of VRE that were able to stop daptomycin, a last-resort treatment for severe bacterial infections, from attacking the bacteria’s cell membrane.

“The way daptomycin works to kill bacteria is not completely understood. We know bacteria have a ‘division septum,’ a region in the middle of the cell where they divide, and that daptomycin binds to the septum to kill the cell. However, the bacteria have learned how to distract the antibiotic from its target,” Khan said.

Enterococci and other bacteria have a stress response system, called LiaFSR, which helps germs build drug resistance and adapt to many environmental stressors. LiaX, they discovered, is a major player in that system.

“We call LiaX the master modulator of resistance, and it basically tells the bacteria to remodel their protective cell envelope, causing daptomycin to bind away from the septum and allowing the cell to survive,” Khan said.

When researchers were studying clinical strains, they noted one in particular from a patient who had a VRE infection in the blood. While that strain began as daptomycin-sensitive, it developed resistance after the patient was treated with daptomycin.

“We observed high levels of the protein outside of the cell that was binding to the antibiotic and signaling back to the cell to activate the stress response,” Khan said.

In essence, the LiaX protein behaves like Paul Revere alerting the bacteria that the antibiotics are coming. However, the researchers discovered it’s not just antibiotics that the protein can sense, it also signals when an immune response is happening.

The immune system produces antimicrobial peptides, which are molecules that help fight infections caused by germs like bacteria or fungi. They work by destroying the cell envelope, much like daptomycin does.

“What we revealed is that not only is LiaX acting as a sentinel protein that latches on to daptomycin, but it can sense the antimicrobial peptides created by our immune systems and elicit the same cell restructuring response,” Khan said.

The bacteria, enterococci, live naturally in the gut. For healthy individuals without a compromised immune system, it is usually not an issue. However, the discovery of this defense mechanism to both antibiotic treatment and the immune response the body naturally produces points to the overall evolution of germs to continue to grow increasingly drug-resistant and resilient.

According to the researchers, a major takeaway from their study is not just that VRE produces a sentinel protein that can protect bacteria against antibiotics and the immune system, but that its protection inherently makes the bacteria more lethal during infection. Other UTHealth authors of the study included Diana Panesso, PhD; William Miller, MD; Melissa Cruz; April Nguyen; Sara Siegel, PhD; Kavindra Singh, PhD; Danielle Garsin, PhD; and Truc Tran, PharmD.