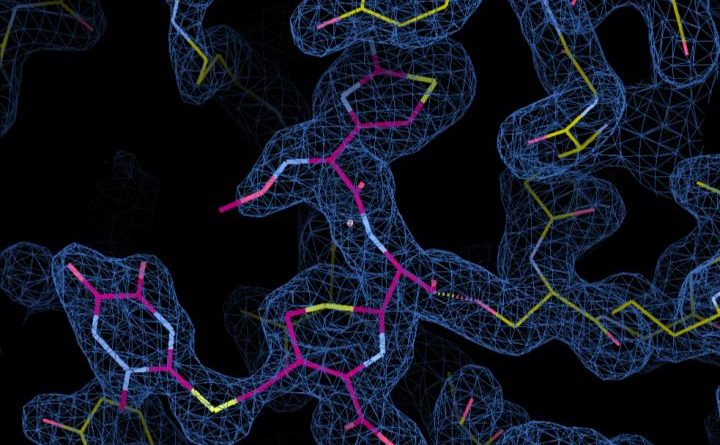 Steadily and relentlessly, the bacterium that causes gonorrhea has slipped past medicine’s defenses, acquiring resistance to once-reliable drugs, including penicillin, tetracycline, and ciprofloxacin. These former stalwarts are no longer used to treat the sexually transmitted disease.

, the bacterium responsible for gonorrhea, began showing resistance to one of the last remaining classes of antibiotics, the Centers for Disease Control and Prevention began recommending “dual therapy,” meaning that doctors now prescribe two drugs at the same time to fight gonorrhea. Currently, those two drugs are ceftriaxone, a member of the cephalosporin class of antibiotics, and azithromycin.

With fears increasing that gonorrhea could breach these last defenses, the work of researchers like crystallographer Christopher Davies, Ph.D., is crucial.

“We’re looking at a molecular level at the events that have got everybody worried out there in the clinics,” said Davies, a professor in the Department of Biochemistry & Molecular Biology and director of the MUSC Center for Structural Biology.

Davies’ team has just published a paper showing how cephalosporins bind and inactivate a gonococcal protein dubbed penicillin-binding protein 2 (PBP2). Led by postdoctoral fellow Avinash Singh, Ph.D., the researchers showed the protein undergoes key structural changes, including twisting and rolling of a loop to bind the antibiotic, that enhance the reaction with cephalosporins. Without these changes, the protein would react much more slowly with the antibiotic.

Davies explained that all antibiotics work by targeting essential functions in a particular bug. Cephalosporins work by attacking the bacterial cell wall.

Normally, PBP2 moves along the bacterial cell’s cytoplasmic membrane, reaching out into the space between the cytoplasmic membrane and the outer membrane, looking for peptides to bind to. The protein joins peptides together to create a mesh – just like an onion bag at the grocery store, Davies said. But antibiotics jump in to bind to the protein before it can get to a peptide.

“The protein is walking around the membrane layer as normal, but its active site is blocked by antibiotic, so all those potential interactions with the peptide substrate are fruitless,” Davies said.

With the protein out of commission and not building the mesh, holes start to appear in the cell wall. Cytoplasm starts to leak out, and the cell bursts and dies, Davies said.

Yet the resistant strains, which have been identified in Japan, France, Spain and most recently in Canada, evade the lethal action of cephalosporins by preventing the antibiotic from binding to the protein target. How they achieve this is a major focus of Davies’ research.

There are 60-some mutations on the PBP2 protein in the resistant strains of gonorrhea. Davies’ team has identified six mutations that are at the root of the resistance and is looking at how the mutations change the way the protein reacts to antibiotics.

Once researchers understand how the mutations are preventing antibiotics from doing their work, new drugs can be developed, Davies said. Knowing which mutations are important may also allow a diagnostic test to be developed to tell doctors whether a particular patient has a resistant strain and, therefore, which drugs to prescribe.

Davies said it appears that the mutations restrict the protein’s flexibility, preventing the structural changes needed to bind the antibiotic. That triggers a new mystery. If those movements are critical to its job of binding to peptides and building the mesh that keeps the cell wall intact, how can the mutations block the antibiotic but still allow the normal reaction? “This is the most fascinating aspect of our research,” Davies said.

“It’s an essential function, so the mutations can’t change the protein too much. It must be able to discriminate. Discriminating against an antibiotic while still retaining the normal binding and reaction with their substrate is a delicate balancing act they have to negotiate,” he said.

This balancing act might be the reason that antibiotic-resistant gonorrhea hasn’t spread as quickly as anticipated.

“There’s a fitness cost. They don’t function quite as well as their susceptible counterparts, and it’s probably for that reason they’re not spreading as fast as people feared they would,” Davies said.

Although the resistant-type gonorrhea isn’t spreading as quickly as public health officials feared, there have been increases in the number of cases of susceptible gonorrhea, as well as other sexually transmitted diseases.

“We expect gonorrhea will eventually wear down our last highly effective antibiotic, and additional treatment options are urgently needed,” said Gail Bolan, M.D., director of the CDC’s Division of STD Prevention, when it released those figures.

South Carolina has the fourth highest rate of gonorrhea, according to an analysis of CDC numbers by Health Testing Centers, a lab testing service.

“We know that there are proven interventions that individuals can use, including regular use of condoms, that markedly reduce the odds of acquiring a sexually transmitted disease. So the rise in STD rates suggests there’s a need for more public health interventions and education,” he said.

Although gonorrhea isn’t fatal, it can cause lifelong problems if left untreated, including infertility and susceptibility to other sexually transmitted diseases, like HIV.

“An important thing for people to know is you can have gonorrhea and not have symptoms, so you can’t rely upon the absence of symptoms alone to provide reassurance that you or your sexual partner do not have gonorrhea,” Meissner said. “Sexually active people at risk for gonorrhea exposure should get regular testing”.

Meanwhile, Davies and his team are continuing their work in the lab. The next step is understanding how the protein can still perform its normal essential function while eluding the antibiotics. The group has some ideas that it will put to the test, he said.

Meissner said antibiotic resistance is concerning to doctors in the clinic.

“Even though the specific strain Dr. Davies is studying is rare, it is important to note that the emergence of resistance in gonorrhea is a real concern,” Meissner said.

Founded in 1824 in Charleston, MUSC is the oldest medical school in the South, as well as the state’s only integrated, academic health sciences center with a unique charge to serve the state through education, research and patient care. Each year, MUSC educates and trains more than 3,000 students and 700 residents in six colleges: Dental Medicine, Graduate Studies, Health Professions, Medicine, Nursing and Pharmacy. The state’s leader in obtaining biomedical research funds, in fiscal year 2018, MUSC set a new high, bringing in more than $276.5 million. For information on academic programs, visit

and its affiliates have collective annual budgets of $3 billion. The more than 17,000 MUSC team members include world-class faculty, physicians, specialty providers and scientists who deliver groundbreaking education, research, technology and patient care.

This part of information is sourced from https://www.eurekalert.org/pub_releases/2019-08/muos-rwt082319.php