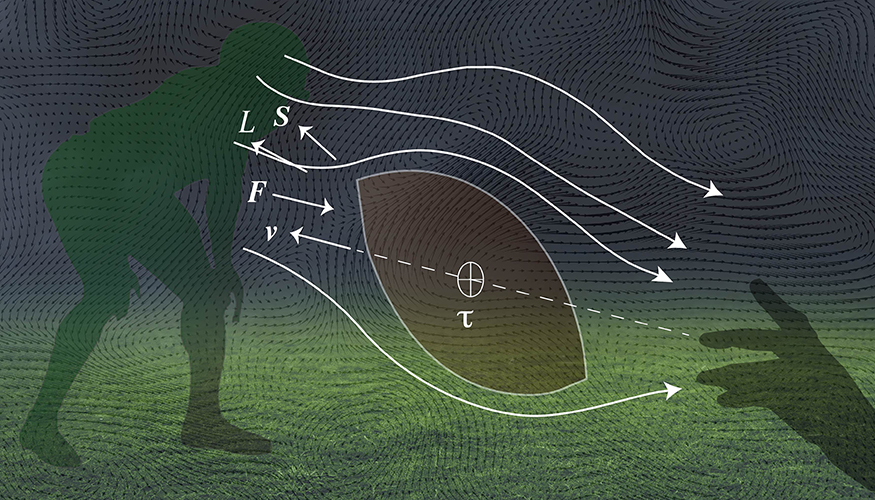 The hallmark of a perfectly thrown football is a tight spiraling of the tip around the trajectory of the parabolic path of flight. Why the tip follows the trajectory has presented a paradox for some time. A team of researchers, including LLNL Physicist Willy Moss, provided a simple resolution to this paradox in a paper published as an Editor’s Selection in the American Journal of Physics on Aug. 19.

Moss – along with lead author Richard Price of MIT and co-author Tim Gay of the University of Nebraska – distilled the physics into two simple equations that could be solved numerically. The solution explains why the tip of the ball follows the ball’s trajectory.

“If you were to put a pen on the nose of a spinning football in flight, you would see that the nose draws a spiral around its direction of motion as it flies, not a single dot at the center,” Moss said. “The combination of gravity, the wind force on the football, and gyroscopics are the key to this paradox. But, a numerical solution by itself still doesn’t help someone understand why the ball does what it does.”

The numerical solution illuminates a simple qualitative explanation based on the odd behavior of gyroscopes.

“Gyroscopic motion is not intuitive, even for physicists,” Moss said. “Just accept as fact the following behavior: If you have a gyroscope spinning vertically and you push the top of it with your finger, it will move to the left or right, at right angles to the push, not in the direction of the push. That’s what’s going on here.”

Because of gravity, the spin axis of the ball is typically slightly tilted, meaning it is not in the same direction as its trajectory. The only exception is in the case of a perfectly thrown spiral pass at the instant the ball is thrown. As the ball travels through the air, wind force pushes against the ball in the direction opposite to the trajectory. The wind pushing on the tilted ball functions like a finger pushing on a gyroscope. The spinning ball moves at right angles to the push and wants to trace a circular path – called “precession” – around the current trajectory. The nose of the ball ends up tracing a circle around wind velocity direction, which is constantly changing, as gravity changes the trajectory.

By focusing on gyroscopic behavior and the interaction of the wind-driven torque with the ball’s trajectory, the researchers were able to develop a quantitative solution that characterizes the motion of a football in flight. There are four key kinematic elements in the quantitative solution presented in this paper: the rate at which it’s spinning, two different types of wobble – nutation and precession – and its trajectory.

“I’ve been interested in this paradox for some time now,” Moss said. “I’ve known Tim for 50 years. We played college football together. We finally got to publish a paper together. It’s been long overdue.”