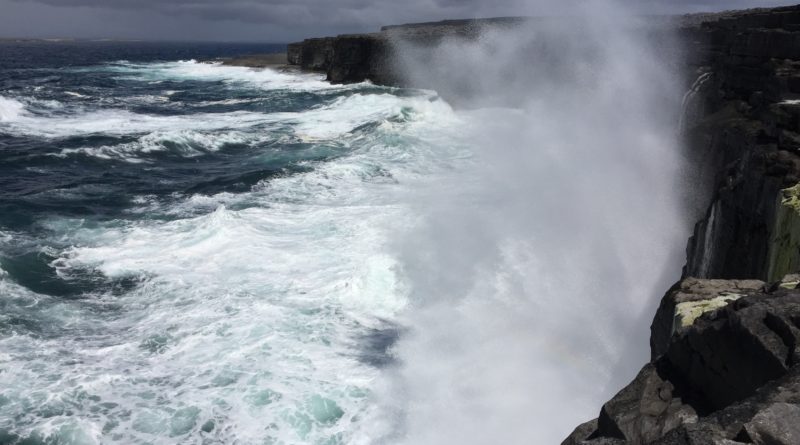 When cyclones or other massive oceanic storms make landfall, their giant waves batter coastlines and sometimes cause widespread damage.

Now, an international team of researchers has analyzed months of data of large nearshore waves to provide new insights that could help improve the designs of a variety of coastal structures from seaports to seawalls to better withstand destructive waves.

In the study published October 28 in the journal Scientific Reports, the researchers report combining a mathematical model to describe the formation of large waves with real-world measurements taken in shallow waters just off of the coast of Ireland, where waves have been reported to hit the shore with enough force to move 100-ton rocks.

“In this work we have analyzed real data in order to show that, over the course of several months measuring different storm events, we find that the extreme waves that we have observed in the coastal data tend on average to be smaller than the rogue waves we have observed in deep water, but they have similar characteristics,” said Francesco Fedele, a associate professor in the Georgia Tech School of Civil and Environmental Engineering.

“These large nearshore waves are still caused by constructive interference – the effect of waves coming in all different directions and basically meeting at one point and piling up to form a large wave, and by second order nonlinearities that distort the sinusoidal shape of waves to have sharper crests and shallower troughs ” Fedele said.

In the study, which was sponsored by Science Foundation Ireland, the researchers analyzed measurements captured by an acoustic doppler current profiler (ADCP) device that was deployed for several months on the ocean floor off Killard Point during Spring 2015 and off the Aran Islands during Spring 2017. During that time, the device was able to capture data from two intense storm events that produced large coastal waves.

The more recent storm, Doris, which hit the Irish coast in February 2017, produced waves as tall as 43 feet from peak to trough, and the earlier storm in 2015 caused waves even taller, as high as 73 feet, according to the measurements from the ADCP, which works by emitting sound pulses and measuring the strength of sounds bouncing off of floating particles to calculate the height of the water.

The researchers used that data to compare with the Tayfun-Fedele and Boccotti statistical models used to explain rogue ocean waves that occur in much deeper water. Those models were used in an analysis of the two famous real-world rogue waves, Andrea and Draupner, observed at oil platforms in the North Sea in 1995 and 2007, as well as the Killard rogue wave observed off the coast of Ireland in 2014.

“We were able to extend these statistical models, which are largely validated for waves in deep waters, to describe coastal rogue waves,” Fedele said.

But for nearshore waves, the breaking of the waves bleeds away some of their energy, he said.

“Once you get into shallow waters, the enhanced nonlinearities make waves less dispersive and the tendency for waves to break intensifies.,” Fedele said. “A lot of the energy is dissipated forming white caps that crash against the shore.”

The research could provide an underpinning for designs of coastal structures that are built to withstand the forces of waves over time.

“For people who want to design coastal structures, you need to know what’s the largest wave that will break in a coastal area over the lifetime of the structure – what’s the largest wave out of however many millions of waves or more that will happen,” Fedele said. “And once you have this knowledge using these statistical methods, you can design the structure to withstand the highest wave.”

Fedele said the next steps of the research would involve studying more about the physical mechanics of the point when waves break, either against the shore as in the case of coastal waves, or when deep sea rogue waves break out in the open water.

This material is based upon work supported by the Science Foundation Ireland. Any opinions, findings, and conclusions or recommendations expressed in this material are those of the authors and do not necessarily reflect the views of the sponsors.