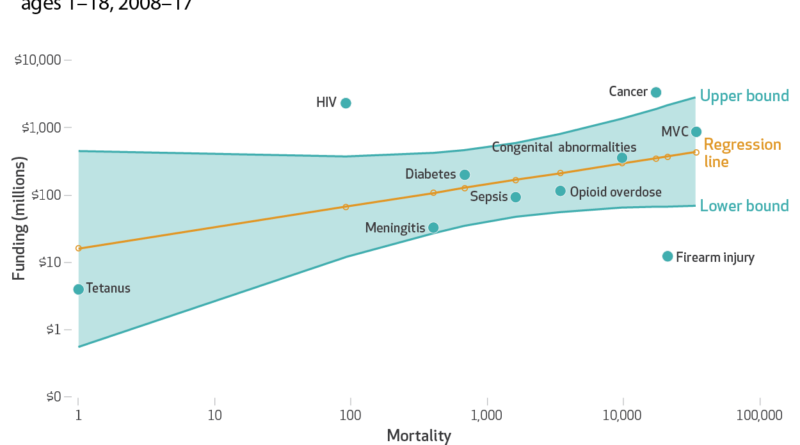 ANN ARBOR, Mich. — Firearm injuries kill 2,500 American children each year, and send another 12,000 to the emergency department. But a new study finds that the nation spends far less on studying what led to these injuries, and what might prevent and treat them, than it spends on other, less-common causes of death in children between the ages of 1 and 18 years.

In fact, on a per-death basis, funding for pediatric firearm research is 30 times lower than it would have to be to keep pace with research on other child health threats.

That mismatch between death toll and research funding may help explain why firearm deaths among young people have climbed, when deaths from other causes have dropped, according to the new study published in the October issue of Health Affairs by a team from the University of Michigan and Brown University.

Child-specific research on motor vehicle crashes – the top cause of death in U.S. young people – received an average of $88 million per year from 2008 to 2017. That comes out to about $26,000 in research funding for each one of the 33,577 young people killed in a vehicle crash in that decade.

Meanwhile, research on pediatric cancer – the third leading cause of death in this age group – received $335 million per year. That’s $195,500 for each of the 17,111 child cancer deaths in the 10-year window.

During this same time, the federal government provided $1 million a year to fund research on firearm-related injuries – the second-leading cause of death among children and teens.

That works out to $597 per death for the 20,719 young people who died from intentional and accidental firearm injuries in the years of the study. In all, the researchers say, pediatric firearm research receives 3.3% of the $37 million per year it would need to keep pace with research on other causes of death among American children.

Less funding means less new knowledge being generated through studies and evaluations, the researchers explain. “This lack of knowledge does not result from the scientific questions or data being more difficult to research than they were for research on the molecular basis of cancer, polio prevention, or motor vehicle crash prevention. Instead, it is because federal agencies have not invested in scientists seeking to discover answers to the key research questions about firearm injuries,” they write.

“We know that when researchers study a health issue, and evaluate efforts to reduce its impact, the toll on individuals and society can drop. This is a stark demonstration of the lack of support for research that could help reduce the chances that children will be hurt or killed by firearms,” says first author Rebecca Cunningham, M.D., interim vice president of research at U-M, and an emergency medicine physician at Michigan Medicine.

“Our goal with this study,” says senior author Patrick Carter, M.D., M.P.H., “is to illuminate the vast opportunity we have as a nation to study firearm-related issues in young people, and apply new knowledge to the problem, if more funding were made available.”

Cunningham and Carter’s co-authors include Brown University/Rhode Island Hospital emergency physician Megan Ranney, M.D., M.P.H. Cunningham and Carter are two of the three co-directors, and Ranney a member, of the Firearm Safety Among Children and Teens Consortium, which in 2018 received a $5 million grant from the National Institute on Child Health and Human Development to support research and education. U-M president Mark Schlissel, M.D., Ph.D. recently announced a new firearm injury prevention initiative that will catalyze further research and education projects at U-M.

The authors of the new paper suggest that the U.S. should create a national institute focused on firearm-related research.

In addition to disparities in funding for the most common causes of child death, the team also finds that research on relatively rare causes of childhood death received even more dollars proportional to their toll on children and teens.

Meningitis, which killed 400 young people in 10 years, was the subject of $33.1 million in funding per year in that time.

Researchers studying pediatric AIDS shared about $25 million in annual funding for each of the 91 AIDS-related deaths of a child or teen. And diabetes, which led to 697 deaths of children and teens in the study decade, received $20 million per year in research funding.

Lack of data limits other comparisons

The authors acknowledge that deaths are only one way to measure the impact of a disease or cause of injury on children, teens, their families and society. But data on the other impacts of firearm injuries has not been compiled, a fact that the FACTS Consortium’s members laid out in a group of recent papers published in the Journal of Behavioral Medicine. They also laid out the most urgent firearm-related pediatric research questions that need answers in a recent piece in the journal Pediatrics.

The new study goes beyond past efforts to quantify the scope of research on different causes of death among all Americans. Cunningham and her colleagues, included only research grants from federal agencies that were specific to children and teens.

They included grants from a wide range of federal agencies, and an estimate of pediatric-related vehicle crash research funding from the National Highway Traffic Safety Administration. The study did not include private foundation or industry funding or other public funding not available in federal databases, such as state funding.

In all, 32 research grants (called awards in the paper) went to pediatric firearm research in the decade studied, compared with 5,168 grants for pediatric cancer research.

The research team also compiled a total number of research papers published with findings about each of the causes of pediatric death. Cancer had the most, with 50,235 papers in one decade. By contrast, pediatric firearm research accounted for just 540 research papers in that same decade, and pediatric vehicle crash research results were reported in 2,223 papers.