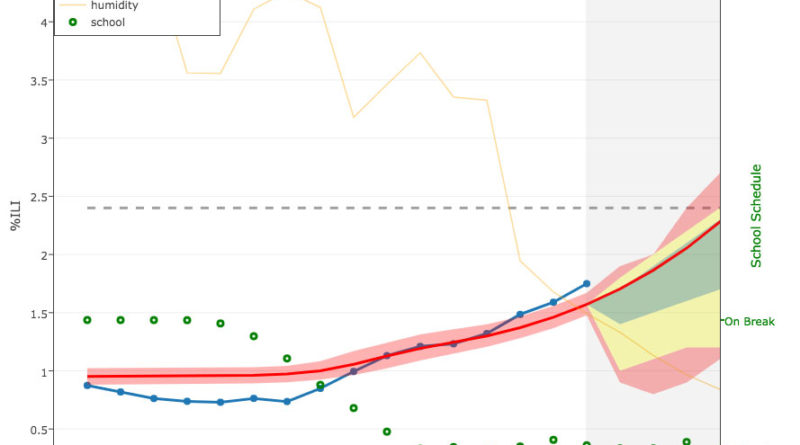 San Diego-based Predictive Science, Inc. this week released their first forecast for the 2019-2020 influenza season, which typically runs from November through March.

“The current forecast, to be updated every week using data from the Centers for Disease Control and Prevention (CDC), suggests that the percentage of influenza-like illness cases will increase by about 75 percent over the next four weeks,” said Pete Riley, senior research scientist and vice president of PSI. “However, the season is just getting started and predictions are not yet that accurate.

“In terms of the relative strength of the current season, at least for San Diego, the cumulative number of reported cases is currently the largest within the last decade or so, suggesting that flu activity is going to be high this year,” added Riley.

For weekly updates as well as past forecasts, see: http://predsci.com/usa-flu-all/.

PSI researchers used the Comet supercomputer at the San Diego Supercomputer Center – an Organized Research Unit of UC San Diego – to train, calibrate, and validate their models for their participation in the CDC Flu Challenge. They used a modeling framework that accounts for a range of mechanisms thought to be important for influenza transmission, such as climatic conditions, school vacations, and the coupling between different regions.

The CDC has estimated that each year there are three to five million seasonal cases of severe influenza illness throughout the world – resulting in 290,000 to 650,000 respiratory deaths.  In the U.S., the spread of influenza is tracked by the CDC using what’s called the Percent of outpatient visits with Influenza-Like Illness, or % ILI, symptoms, which encompass a temperature above 100 degrees Fahrenheit, a cough and/or a sore throat.

“The CDC’s ILI data is published on a weekly basis for the nation, regions, and states,” said Michal Ben-Nun, a research scientist at PSI. “For health care providers, preparing and responding to the spread of flu can be difficult because of unknowns as to when and where it spreads, when it peaks, and how the strength of the peak varies from season to season.”

Since the 2013-2014 season, the CDC has run the CDC Flu Challenge to predict the timing, intensity and short-term incidence of influenza.  The long-term goal of the Challenge is to help health care providers plan ahead and reduce the impact of flu.

“Some of our models use historic ILI data to augment the season we are predicting as well as past statistical information about the force of infection,” said Ben-Nun. “During each of the CDC Flu Challenge weeks, the most up-to-date data is used by PSI to run the models and submit our weekly forecast for onset of the flu season, season peak week, season peak intensity, and ILI activity during the next one to four weeks.”

For each of the models, the forecast is made after fitting the model parameters using a Markov-Chain-Monte Carlo procedure. When the models were developed, tested and in some cases, trained, the PSI researchers used Comet to perform a retrospective forecast for each epidemic week in the past eight influenza seasons.

“These calculations fall under the category of ‘embarrassingly parallel’, which means we can run each model, for each week and each season on a single core,” explained Ben-Nun. “We received a lot of support and help when we installed our codes on Comet and in writing the scripts that launched hundreds of calculations at once – our retrospective studies of past influenza seasons would not have been possible without access to a supercomputer like Comet.”

For additional information about how PSI uses supercomputers to complete their work ranging from influenza forecasting to the prediction of solar eclipses, refer to this recent article by the National Science Foundation’s Extreme Science and Engineering Discovery Environment (XSEDE).