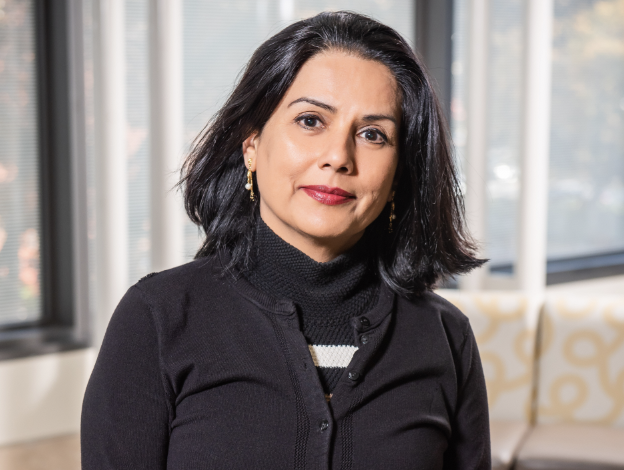 BIRMINGHAM, Ala. – Is personalized medicine cost-effective? University of Alabama at Birmingham researcher Nita Limdi, Pharm.D., Ph.D., and colleagues across the United States have answered that question for one medical treatment.

Patients experiencing a heart attack — known as a myocardial infarction or an acute coronary syndrome — have sharply diminished blood flow in coronary arteries, with a high risk of heart failure or death. Coronary angioplasty, a procedure to open narrowed or blocked arteries in the heart, and percutaneous coronary intervention, known as PCI or stenting, can restore blood flow to minimize damage to the heart. These procedures reduce the risk of subsequent major adverse cardiovascular events, or MACE, which include heart attacks, strokes or death.

But then, a treatment decision has to be made.

After stenting, all patients are treated with two antiplatelet agents for up to one year. Which combination of antiplatelets is best? The answer comes through pharmacogenomics, says Limdi, a professor in the UAB Department of Neurology and associate director of UAB’s Hugh Kaul Precision Medicine Institute.

Pharmacogenomics combines pharmacology, the study of drug action, with genetics, the study of gene function, to choose the best medication according to each patient’s personal genetic makeup. This is also called precision medicine — tailored medical treatment for each individual patient.

The most commonly used antiplatelet combination after PCI is aspirin and clopidogrel, which is trademarked as Plavix. Clopidogrel is converted to its active form by an enzyme called CYP2C19. However, patients respond to clopidogrel differently based on their genetic makeup.

More than 30 percent of people have loss-of-function variants in the CYP2C19 gene that decrease the effectiveness of clopidogrel. The FDA warns that these patients may not get the full benefit of clopidogrel, which would increase the risk of MACE. So the FDA advises doctors to consider a different treatment such as prasugrel or ticagrelor, trademarked as Effient and Brillinta, to replace clopidogrel.

While most patients undergoing PCI receive clopidogrel without receiving any CYP2C19 loss-of-function testing, academic institutions like UAB that offer precision medicine use pharmacogenomics to guide the selection of medication dosing.

In 2018, Limdi and other investigators across nine United States universities — all members of the Implementing Genomics in Practice consortium, or IGNITE — showed that patients with loss-of-function variants who were treated with clopidogrel had elevated risks. There was a twofold increase in MACE risk for PCI patients, and a threefold increase in MACE risk among patients with acute coronary syndrome who received PCI, as compared to patients prescribed with prasugrel or ticagrelor instead of clopidogrel. Prasugrel and ticagrelor are not influenced by the loss-of-function variant and can substitute for clopidogrel, but they are much more costly and bring a higher risk of bleeding.

The IGNITE group then leveraged this real-world data to conduct an economic analysis to determine the best drug treatment for these heart disease patients.

“We showed that tailoring antiplatelet selection based on genotype is a cost-effective strategy,” Limdi said. “Support is now growing to change the clinical guidelines, which currently do not recommend genotyping in all cases. Evidence like this is needed to advance the field of precision medicine.”

Costs, QALYs and ICERs In the analysis, Limdi and colleagues considered differences in event rates for heart attacks and stent thrombosis in patients receiving clopidogrel versus ticagrelor versus genotype-guided therapy, during the one-year period following stenting. They also included medical costs from those events that are borne by the payer, such as admissions, procedures, medications, clinical visits and genetic testing. The analysis considered variations in event rates and medication costs over time to ensure that the results held under different scenarios.

The study uses an economic measure — the QALY, which stands for the quality-adjusted life year.

“First, we looked at which strategy provided the highest QALY,” Limdi said. “The QALY is the gold standard for measuring benefit of an intervention — in our case, genotype-guided treatment compared to treatment without genotyping. Universal ticagrelor and genotype-guided antiplatelet therapy had higher QALYs than universal clopidogrel — so those are the best for the patient.”

But health care resources are not infinite. So, Limdi and colleagues then evaluated whether those interventions that have higher QALYs were also reasonable from a cost perspective. This analysis considered the willingness to pay. What would a payor or a patient pay for the highest QALY?

“In our case, the payor would recognize that ticagrelor is more expensive than clopidogrel — $360 per month vs. $10 per month — and there is a $100 cost for each genetic test,” Limdi said. “So, from the payor perspective, the more effective strategy (one with a higher QALY) — if more expensive (higher cost) — would have to lower the risks of bad outcomes like heart attacks and strokes for the gains in QALY that are at, or below, the willingness-to-pay threshold.”

A calculation called incremental cost-effectiveness ratios, or ICERs, assesses the incremental cost of the benefit (improvement in QALY). In the United States, a treatment is considered cost-effective if its associated ICER is at or below the willingness-to-pay threshold of $100,000 per QALY.

“In our assessment, the two strategies with the highest QALY had very different ICERs,” Limdi said. “The genotype-guided strategy was cost-effective at $42,365 per QALY. Universal ticagrelor was not; it had an ICER of $227,044 per QALY.”

The researchers also looked at some secondary strategies for a real-world reason. A number of clinicians now prescribe ticagrelor or prasugrel for the first 30 days after PCI, which is considered a period of greater risk, and then switch their patients to the less expensive drug clopidogrel.

The secondary analysis allowed Limdi and colleagues to explore the cost-effectiveness of giving all patients ticagrelor for 30 days, and then switching them to clopidogrel, without genetic testing, versus switching the patients based on genotype. Both strategies were better — in terms of QALYs — than a universal switch to clopidogrel at 30 days. However, neither of the two appeared to be cost-effective. Because these secondary strategies used estimated parameters, “the findings should only be considered as hypothesis-generating,” Limdi said.