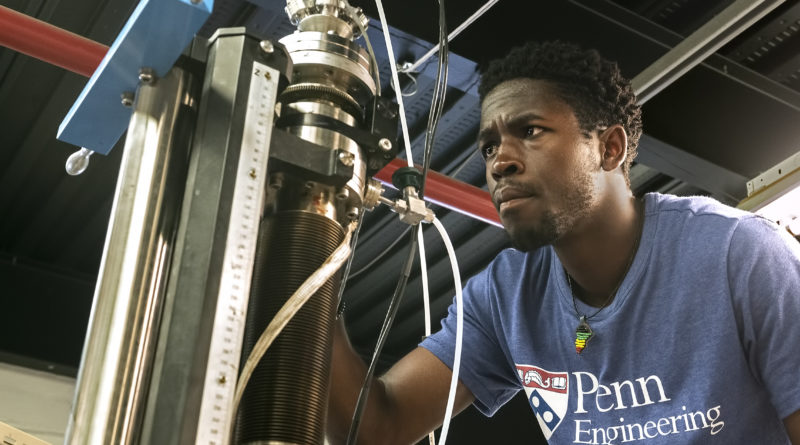 Adebayo-Ige has been fascinated with the idea of fusion as an inexhaustible, inexpensive, and clean source of generating electric energy since he was a teenager. Now a rising senior majoring in chemical engineering at the University of Pennsylvania, he plans to attend graduate school in nuclear engineering with the goal of working on the quest for fusion energy.

He was only half joking about fusion saving the world, he said. “In a sense that really is what (fusion) is,” Adebayo-Ige said. “You’re trying to create solutions. You can’t depend on fossil fuels, that’s a fact. It’s an important line of work.”

Adebayo-Ige grew up in Eastvale in Southern California, and is one of three sons of two evangelical ministers, Bernard and Morenike Adebayo-Ige. He has done several research internships during college. He was one of 20 students selected nationwide to participate in a National Science Foundation’s Louis Stokes Alliance for Minority Participation (LSAMP) scientific computing internship at Brookhaven National Laboratory in 2018.

But none of the internships offered fusion energy research, and that’s why Adebayo-Ige did some digging and found the Department of Energy (DOE) / Office of Science Science Undergraduate Laboratory Internships (SULI) program offered at many DOE national laboratories, including the Princeton Plasma Physics Laboratory’s (PPPL). He was one of some 45 interns working at PPPL during the summer. “PPPL is one of the premier nuclear facilities in the world,” Adebayo-Ige said. “We’re just college undergrads and we have an opportunity to come work with researchers who are at the forefront of their fields and just really learn.”

Adebayo-Ige worked with researcher Yuxin Yang, a professional specialist in the Princeton University Engineering Department who had been working with Bruce Koel, a professor of chemical and biological engineering at Princeton who heads the Materials Science Laboratory at PPPL. Adebayo-Ige helped Koel and his team investigate how the lithium could be used as plasma facing components to coat the inner walls of fusion devices called tokamaks. The experiment looked into how lithium interacts with deuterium, the nuclear fuel used in fusion reactors, in ultra-high vacuum conditions .

When Adebayo-Ige wasn’t working at PPPL, he was training to play on his university’s soccer team and studying for the graduate school entrance exam. He also found time to go to Six Flags Amusement Park and visit friends in New York City.

In addition to learning research techniques like spectroscopy, Adebayo-Ige said he has learned intangible skills about the importance of paying attention to procedures and details when working with Yang. The internship helped him decide to continue focusing on material science related to developing fusion energy in graduate school and bolstered his graduate school application.   The internship “has given me the tools to become a stronger applicant,” he said, “especially with the research skills I learned here at PPPL.”

PPPL, on Princeton University’s Forrestal Campus in Plainsboro, N.J., is devoted to creating new knowledge about the physics of plasmas — ultra-hot, charged gases — and to developing practical solutions for the creation of fusion energy. The Laboratory is managed by the University for the U.S. Department of Energy’s Office of Science, which  is the single largest supporter of basic research in the physical sciences in the United States and is working to address some of the most pressing challenges of our time. For more information, visit energy.gov/science.